Girl, 8, wounded in California synagogue shooting: “I will keep going to synagogue” 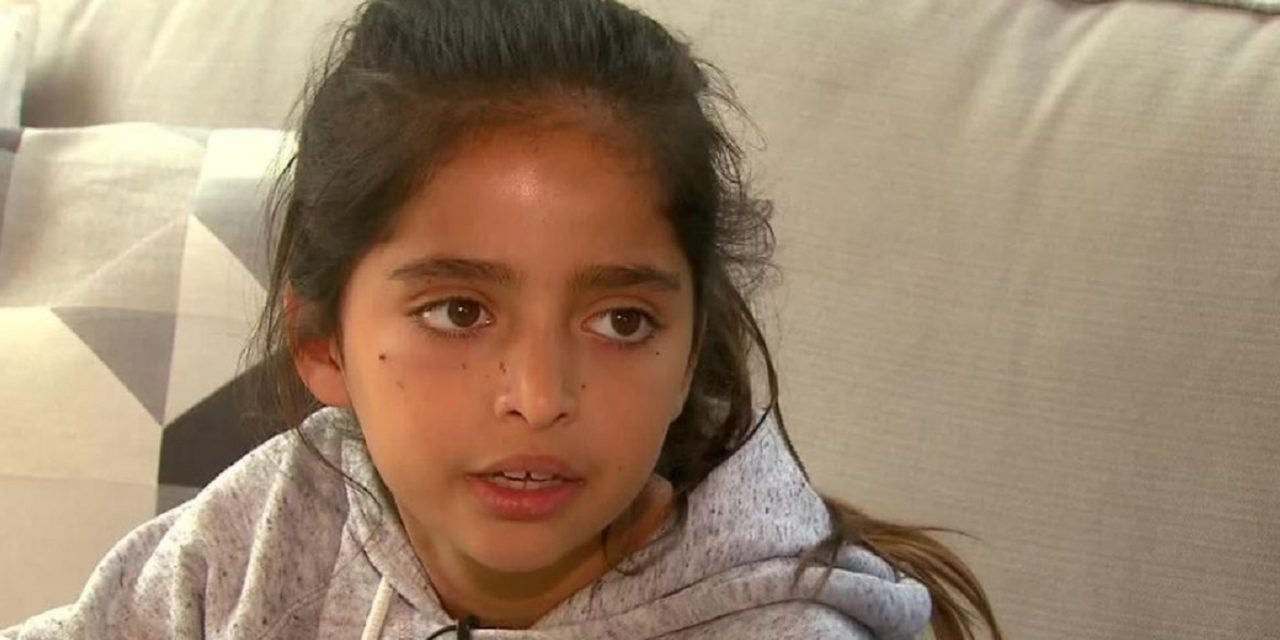 The eight-year-old girl who suffered a shrapnel wound in Saturday’s synagogue shooting attack in San Diego has spoken of the ordeal, saying “this world isn’t supposed to be like this”.

Noya Dahan had finished praying and gone to play with other children at Chabad of Poway near San Diego when gunshots rang out. Her uncle grabbed her and the other children, leading them outside to safety as her leg bled from a shrapnel wound.

“I was scared, really, really scared,” said Noya, recalling how the group of children cried out in fear after a gunman entered the synagogue on Saturday morning and started shooting.

Whilst in hospital, Nova asked for her photo to be shared on social media, “So they can see I’m strong”.

"The world isn't supposed to be like this." -Noya Dahan, 8, the youngest victim in this weekend's synagogue shooting in California.

Nova has spoken several times to the media since the attack, in which she explained her experience, including how the attacker was pointing the gun at the children.

“In the first place, when it was like gushing blood, I didn’t feel it. After they wiped it and the blood was off…it felt like I had the giantest bruise ever.”

"It was very, very scary and I'm not supposed to go through these stuff." — Noya Dahan.@JonVigliotti spoke with the two others who were injured in the California synagogue shooting, 8-year-old Noya Dahan and her uncle Almog Peretz: pic.twitter.com/9q1Edm466O

Noya also explained that despite the attack, she will keep going to synagogue but will be careful.

Authorities said the 19-year-old gunman opened fire as about 100 people were worshipping. The attack, which came on the last day of Passover, was exactly six months after a mass shooting in a Pittsburgh synagogue.

Nova’s  uncle Almog Peretz was shot as he led the children out of the synagogue to safety. Congregant Lori Kaye, 60, was killed shielding the synagogue’s rabbi, who was shot in the hand, losing two fingers.

Nova’s father explained that the family’s home in southern Israel had been hit by rockets several times over the years, and that he was injured on one of those occasions.

“We came from fire to fire,” said Israel Dahan, Noya’s father, referring to the family’s move from the rocket-battered Gaza-border town of Sderot to California.

After moving to the US several years ago, he said, the family’s new home was targeted — this time by anti-Semites, who spray-painted swastikas on the walls.

“It can happen anywhere. We are strong,” he said.

"In the first place, when it was like gushing blood, I didn't feel it. After they wiped it and the blood was off…it felt like I had the giantest bruise ever." 8-year-old Noya Dahan describes being hit by shrapnel during the Poway, CA, synagogue shooting. https://t.co/fklcGJto4S pic.twitter.com/o6nzlxtSEF

Nova’s uncle, Almog Peretz, said he was able to quickly protect children from harm during the attack due to instincts he honed over years rushing to shelters to hide from thousands of rockets fired by terror groups in the Gaza Strip over the last 15 years.

“This is sad, but I am originally from Sderot so we know a bit about running from the Kassam rockets,” he told Israel’s Channel 12 from his hospital bed.

“A person with a big rifle, like an M16, entered the synagogue and started shooting everywhere,” Peretz recalled. “At first we thought the ceiling had collapsed, but then I turned around and saw he was aiming his weapon at me.

“There were many small kids next to me,” he continued. “I took a little girl who was our neighbor and three nieces of mine and ran. I opened the back door and we ran with all the children to a building in the back. I hid them in that building.

“As I picked up the girl, the terrorist aimed his weapon at me. I was injured in the leg.”

Peretz said he then returned to the synagogue, fearing for another of his nieces.

“I came back because one of my nieces was stuck in the bathroom. I had to go back and bring her,” he said. “Fortunately she stayed there and the terrorist had already left.”

Watch the beautiful reunion of Almog Peretz and his 8-year-old niece Noya Dahan. They were both injured in the attack on the synagogue in San Diego on Saturday. During the attack, Almog grabbed children and took them outside to safety. He took a bullet that was fired at a 5-year-old girl. We're pleased to see both Almog and Noya recovering well and continue to pray for all those affected by this awful anti-Semitic attack.

Posted by Christians United for Israel – UK on Tuesday, 30 April 2019

Another Israeli congregant, Shimon Abitbol, said he had taken one of his grandsons outside the synagogue hall during the service, and that he was returning when he heard the gunshots.

“Without thinking twice I lay down on my grandson and protected him,” he said. “After I counted seven or eight gunshots and there was a lull — I assume the weapon jammed — I took the grandson and rushed outside through a side door; we gathered all the children there.”

Abitbol said he then returned to the prayer hall and saw that Rabbi Yisroel Goldstein, “a truly amazing person, suffered bullets to his hands. He covered his wounds with a tallit [prayer shawl] — a very surrealistic sight.”

Abitbol, who is a paramedic with Magen David Adom, then attempted to treat Lori Gilbert-Kaye, who was killed in the attack.

“I didn’t find a pulse,” he said. “Her husband who is a medical doctor came to me and said, ‘Listen, this is my wife.’ He then fainted. It was a very, very difficult moment.”

"The world isn't supposed to be like this." -Noya Dahan, 8, the youngest victim in this weekend's synagogue shooting in California.

Rabbi Yishoel Goldstein said he was preparing for a service when a young man wearing sunglasses appeared in front of him with a rifle.

He raised his hands and lost one of his fingers in the shooting.

And then, the rabbi said, “miraculously the gun jammed”.

In the moments that followed, Rabbi Goldstein said he wrapped his bloodied hand in a prayer shawl and addressed congregants gathered outside the building, vowing to stay strong in the face of the deadly attack targeting his community.

“We are a Jewish nation that will stand tall. We will not let anyone take us down. Terrorism like this will not take us down,” he recalled telling the community.