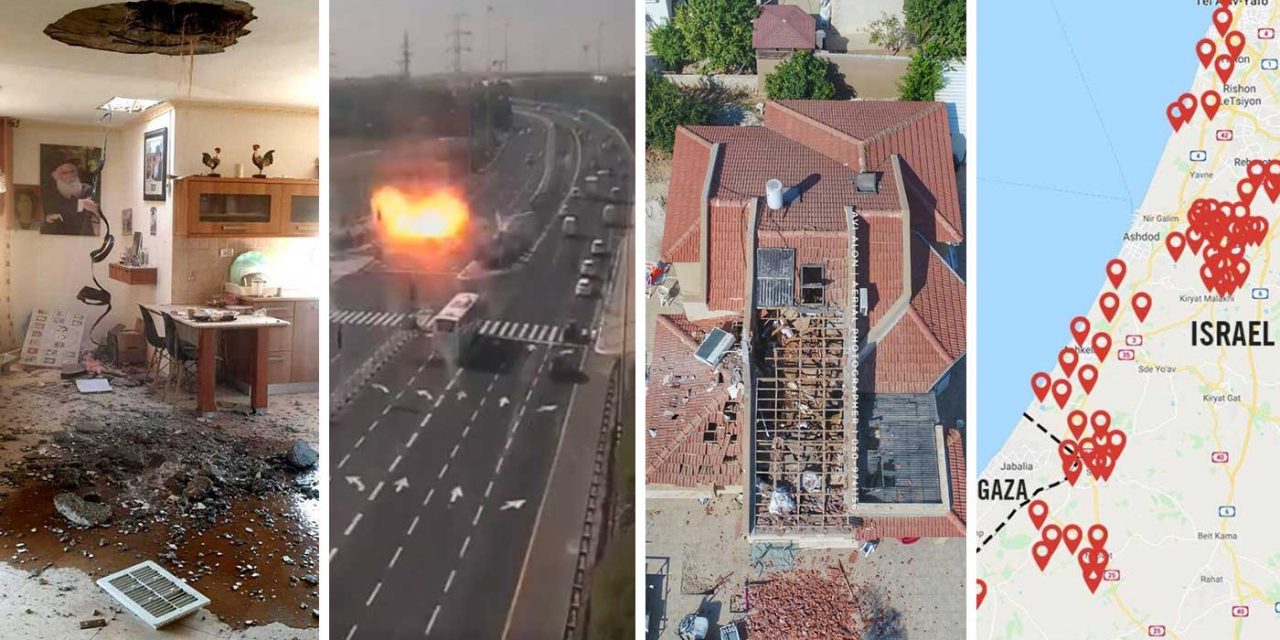 Israel is currently under attack as Palestinian terrorists target Israeli civilians with a barrage of over 150 rockets being fired into Israel so far today. The flare up began after Israel killed a terrorist commander of Islamic Jihad.

In the early hours of Tuesday morning, the Israel Defense Forces (IDF) carried out an air strike on the home of Baha Abu al-Ata, a senior commander of the Palestinian Islamic Jihad terrorist group in Gaza. The precision airstrike killed the terrorist commander and his wife and injured two others.

Al Ata was directly responsible for hundreds of terror attacks against Israeli civilians and soldiers.

According to the IDF, Abu al-Ata was the true “senior commander” of the Islamic Jihad in the Gaza Strip, having ordered the group to carry out most of the significant rocket and border attacks from the Palestinian enclave in recent months and planning to carry out more.

“[Abu al-Ata] acted in every way to sabotage attempts for calm with Hamas, and… was responsible for the majority of attacks that took place over past year,” IDF chief Aviv Kohavi said in a press conference on Tuesday afternoon.

The Iranian regime funds Islamic Jihad and provides weaponry and rockets to the terrorist groups. PIJ are under the direct command of Iran and is seen as one of its terrorist proxies in Gaza.

PRECISION STRIKE: This is the building we surgically targeted overnight to thwart the imminent threat of Islamic Jihad commander in Gaza, Baha Abu Al Ata.

The PIJ leader was said to be planning attacks in the coming days, including a complex sniper and explosive device ground operation against Israeli forces on the Israeli-Gaza border.

PIJ has vowed an “unprecedented” response to the killing of its northern brigade commander in Gaza. In a separate incident, an airstrike in Damascus, Syria overnight targeted another senior PIJ commander. It is unclear whether the commander or his family members were killed. The IDF has declined to comment on the incident.

In response to these actions, terrorists in Gaza have launched more than 150 rockets into Israel. All of these rockets are war crimes as they are targeting Israeli civilians, whilst Israel is only attacking military targets.

Israel has closed all schools, non-essential workplaces and rail travel from the Gaza border region up to Tel Aviv, and has also shut its two border crossings with Gaza as well as limited the Gaza fishing zone to 6 nautical miles. The IDF spokesman has said it is “preparing for a number of days of fighting.”

The Ministry of Foreign Affairs reported that as of 2:30pm Israeli paramedics have treated a total of 39 people. Amongst those treated were 2 with shrapnel injuries in the Beer Tuvia Regional Council, 20 people who were injured running to bomb shelters and 17 suffering from stress symptoms.

An eight year old Israeli girl who suffered from a heart condition related to stress fainted during one rocket barrage. She is said to be in a critical condition.

A warehouse in the southern Israeli city of Sderot was hit by a rocket, causing a large fire. The warehouse was used to store mattresses and is in danger of collapse. Thankfully no injuries were reported as the building was evacuated beforehand.

Another rocket hit a road as cars were travelling on it, narrowly missing civilian drivers as they made their way to work. Video below shows the moment of impact. Thankfully no one was injured.

Pray, pray, PRAY! Israel is under attack by Palestinian Islamic Jihad (PIJ) terrorists in Gaza – this happened this morning.They have launched 50 rockets at Israel so far.If anyone tells you "Israel started this", don't believe them. Israel ONLY attacks militant Islamic terrorists. PIJ and Hamas on the other hand are targeting Israeli CIVILIANS.THIS is terrorism. The WORLD must condemn it!#PrayforIsrael #DefendIsrael #LoveIsrael #IDF #Hamas #PIJ #Terrorism #CUFI

Posted by Christians United for Israel – UK on Tuesday, 12 November 2019

The IDF was forced to step up their airstrikes against Palestinian Islamic Jihad in the wake of these terror attacks.

The Israeli military said its airstrikes targeted underground terror facilities and training camps. The IDF said these underground facilities were used “for storage and manufacturing of weapons.”

These sites are seen as critical facilities for the terror group, which PIJ has invested large sums of money to construct.

IDF aircraft also bombed a group of Islamic Jihad operatives in the northern Gaza Strip as they prepared to fire rockets at Israel around 1 p.m., the military said.

One of the terrorists was killed and three others were wounded in the strike, the Hamas-run Gaza health ministry said.

Palestinian Islamic Jihad confirms the death of one of its northern branch militants, Zaki Adnan Mohammed Ghannam. He was killed by an IDF airstrike earlier today. #Gaza #Israel pic.twitter.com/grdrSifdJm

The Israeli envoy to the UN calls on the United Nations Security Council to condemn the rocket fire from the Gaza Strip toward Israel.

“Nine million citizens are facing an insufferable terror attack by terror groups. I expect a clear and unequivocal condemnation of the side responsible for this and not a statement calling for both sides to act with restraint. The time has come for the international community to understand that silence is a prize for terror,” Ambassador Danny Danon says in a statement.

Danon adds: “Israel is not interested in an escalation but will lead the campaign against terror with determination and strength.”

Attacks against Israel come in many forms. Today alone, we saw rockets fired from Palestinian Islamic Jihad in Gaza & an EU court decision discriminating against products made in Judea & Samaria, & Golan Heights. Both are efforts to weaken the Jewish State. Both will be overcome!