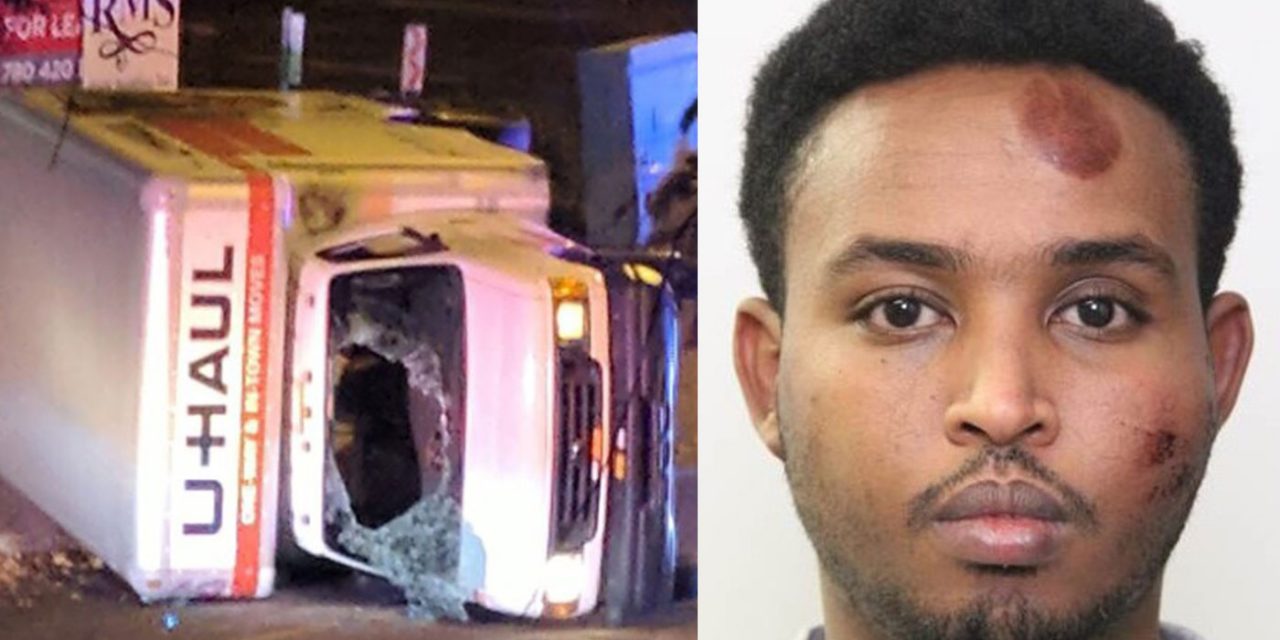 The man accused of stabbing an Edmonton police constable on the weekend and running down four pedestrians on Jasper Avenue, using two separate vehicles, has not been charged with terrorism-related offences. This is despite the fact an ISIS flag was discovered in one of the vehicles and the attacker had previously been investigated by authorities for “espousing extremist views”.

The incident began Saturday evening when Abdulahi Hasan Sharif, a 30-year-old Somalian immigrant, ploughed his Chevrolet Malibu into a police officer, Const. Mike Chernyk, sending him five metres into the air before Sharif crashed his car into another vehicle. Sharif then got out of his vehicle and repeatedly stabbed Chernyk in the head and face.

Below is the video of that attack. Be warned, some may find this disturbing.

Hours later, police pulled over a U-Haul cube van, which Sharif was driving, at a check stop on the city’s north side. Officers noticed the driver’s name was similar to the registered owner of the car that had struck the officer.

Sharif fled in the U-Haul and was pursued by two marked police vehicles and four tactical vehicles, Insp. Carlos Cardoso explained on Monday.

During the pursuit, Sharif used the U-Haul van to deliberately hit four pedestrians along Jasper Avenue at 107th Street, causing extensive injuries, before police officers managed to flip the van on its side on 100th Avenue at 106th Street.

“It was a tactical vehicle that manoeuvred to get U-Haul on its side,” Cardoso said.

Other police cars blocked off the streets during the chase then secured the area once the pursuit was over. Sharif was arrested by the officers and a black ISIS flag was found inside the first car he used to ram the police officer.

#BREAKING The vehicle that crashed into a police roadblock in #yeg has what appears to be an ISIS flag in the front seat. @ctvedmonton pic.twitter.com/zTP6dcwAAj

“If we hadn’t pursued this vehicle, in light of the use of the car earlier to run over a police officer, and the history of large vehicle attacks in Germany, Spain and other European countries, the outcome would have been much worse,” Cardoso said.

Two pedestrians have since been released from hospital. Two remain in hospital, one in serious condition, Talbot said Monday.

Chernyk, the police officer, was treated for stab wounds to his head and face and abrasions on his arms. The 11-year veteran of the force has since been released from hospital.

The morning after the attack Canadian Prime Minister Justin Trudeau initially called the incident a “terrorist attack”, however, on Monday authorities announced that they were not pursuing terrorism charges.

Abdulahi Hasan Sharif has been charged with five counts of attempted murder, four counts of criminal flight causing bodily harm, dangerous driving and possession of a weapon for a dangerous purpose, however, no charges relating to terrorism, it was announced Monday.

The RCMP’s Integrated National Security Enforcement Team (INSET) has taken over the investigation, headed up by Supt. Stacey Talbot.

When asked why Sharif wasn’t charged with participation in a terrorist attack, Talbot said: “The complexities of a terrorism investigation are vast. If warranted, further charges will be pursued.”

Abdulahi Hasan Sharif, is a Somali refugee living in Canada and was investigated in 2015 for allegedly espousing extremist views. Investigators at the time said there was insufficient evidence for an arrest and decided he was not a national security threat.

Sharif came to Canada in 2012 and is said to have raised no red flags for immigration officials, according to Public Safety Minister Ralph Goodale. He entered the country through the normal route.

Surprisingly, despite the fact an ISIS flag was discovered in the attackers possession, ISIS have not claimed responsibility for this attack.

“The Government of Canada and Canadians stand with the people of Edmonton after the terrorist attack on Saturday that sent an Edmonton Police Service officer to hospital and injured a number of innocent people who were out to cheer on their football team and to enjoy an evening in their city. I am deeply concerned and outraged by this tragedy.

“Our thoughts are with those injured, their family and friends, and all those affected by this senseless act of violence. I am also grateful for the first responders who were there on the scene, and the enforcement authorities who have been working through the night to make sure that everybody in Edmonton and Alberta is safe and secure. Police officers put themselves at great personal risk every single day on our behalf, and this attack is a stark reminder of the sacrifices they make for the public good.

“While the investigation continues, early reports indicate that this is another example of the hate that we must remain ever vigilant against. The RCMP and the Edmonton Police Service, through the Integrated National Enforcement Team, are working closely together to bring those involved to justice.

“We cannot – and will not – let violent extremism take root in our communities. We know that Canada’s strength comes from our diversity, and we will not be cowed by those who seek to divide us or promote fear. Edmonton is a strong and resilient city, and I am confident that its citizens will support one another to overcome this tragic event.”