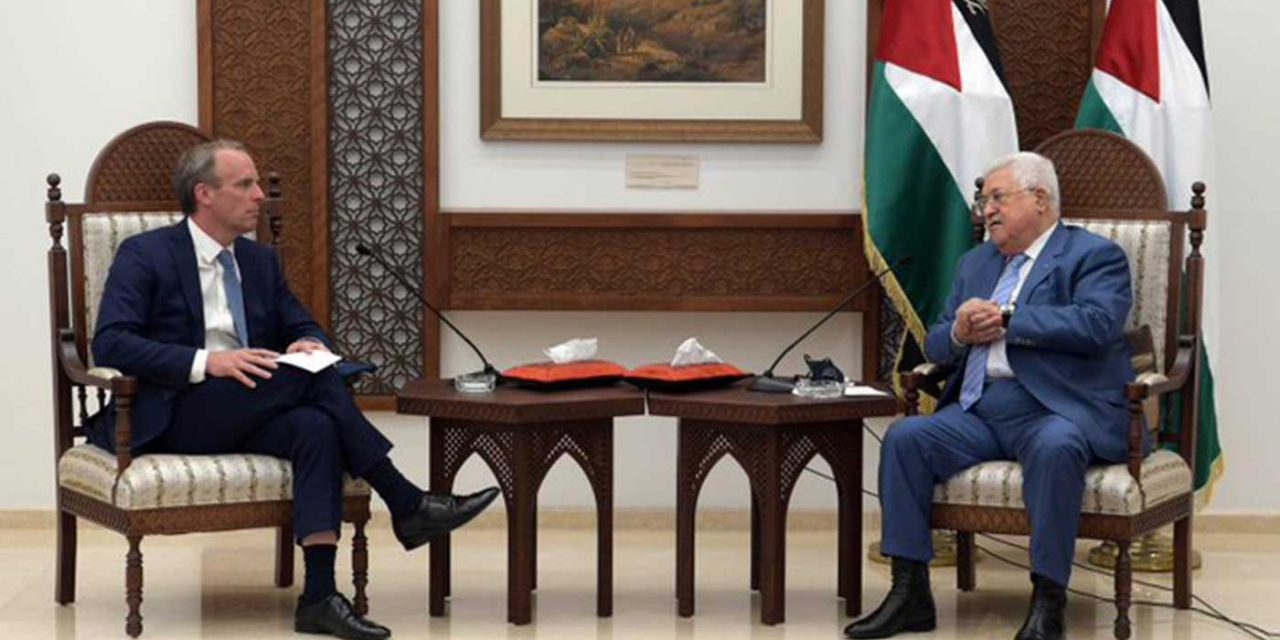 Regarding his meeting with President Abbas, a Foreign Office spokesman said:

“The Foreign Secretary used his discussions with President Abbas to set out the UK’s unwavering commitment to a two-state solution.

“In their meeting, the Foreign Secretary encouraged President Abbas to re-engage in direct discussions with Israel given the suspension of annexation plans.

“They discussed the twin challenges that Covid and the excessive constraints of Israeli occupation were placing on the Palestinian people.

“The UK has provided long-standing development support to the Occupied Palestinian Territories and the Foreign Secretary set out further contributions today to help alleviate the impacts of coronavirus.”

During my meeting with Palestinian President Abbas today, I underlined the UK’s friendship & support for a two-state solution & encouraged 🇵🇸 to resume cooperation with Israel – a key step in improving the situation in the West Bank and Gaza & securing peace in the Middle East pic.twitter.com/cM5EWkG0P9

According to Abbas’s office, the Palestinian leader claimed the Palestinians “are ready to return to negotiations and are committed to achieving peace”.

Surprisingly, Abbas also told the UK Foreign Minister that the Palestinians “are also firmly committed to fighting global terrorism”, despite the Palestinian Authority themselves paying the salaries of terrorists who carry out attacks against Israelis.

He also spoke of uniting Gaza and the West Bank under one Palestinian government which will result in the Palestinians carrying out elections for the first time in over fifteen years.

Abbas also thanked the UK for the tens of millions of pounds in aid that the UK gives to the Palestinians each year.

“We appreciate all the aid Britain provides to support building our institutions and advancing our national economy. We say that it is time for Britain to recognize the state of Palestine.

This will help achieve justice and work to consolidate the two-state solution on the basis of the 1967 borders, so that Palestine and Israel may live in security, peace and good neighbourliness,” Abbas said.

(Note: The 1967 borders are ceasefire lines, not borders.)

Dominic Raab shared his connection with Palestinian Prime Minister Dr Mohammad Shtayyeh after the pair met when Raab studied at Birzeit University in the Palestinian territories and worked together with him at PEDCAR.

22 years ago I studied over the summer at @BirzeitU and worked at PECDAR with @DrShtayyeh. A real pleasure to return, and reaffirm in the spirit of friendship 🇬🇧 support for a two-state solution leading to lasting peace pic.twitter.com/dASy4tgQw3

During his meeting with Shtayyeh, Raab revealed a £2.7 million aid package to vulnerable Palestinians.

A £2.7m UK aid package for vulnerable Palestinians is just the latest example of our close ties with 🇵🇸

Discussed this, how we can help in the fight against #coronavirus, and our strong education links today with PM @DrShtayyeh pic.twitter.com/t7NjQvjHS4