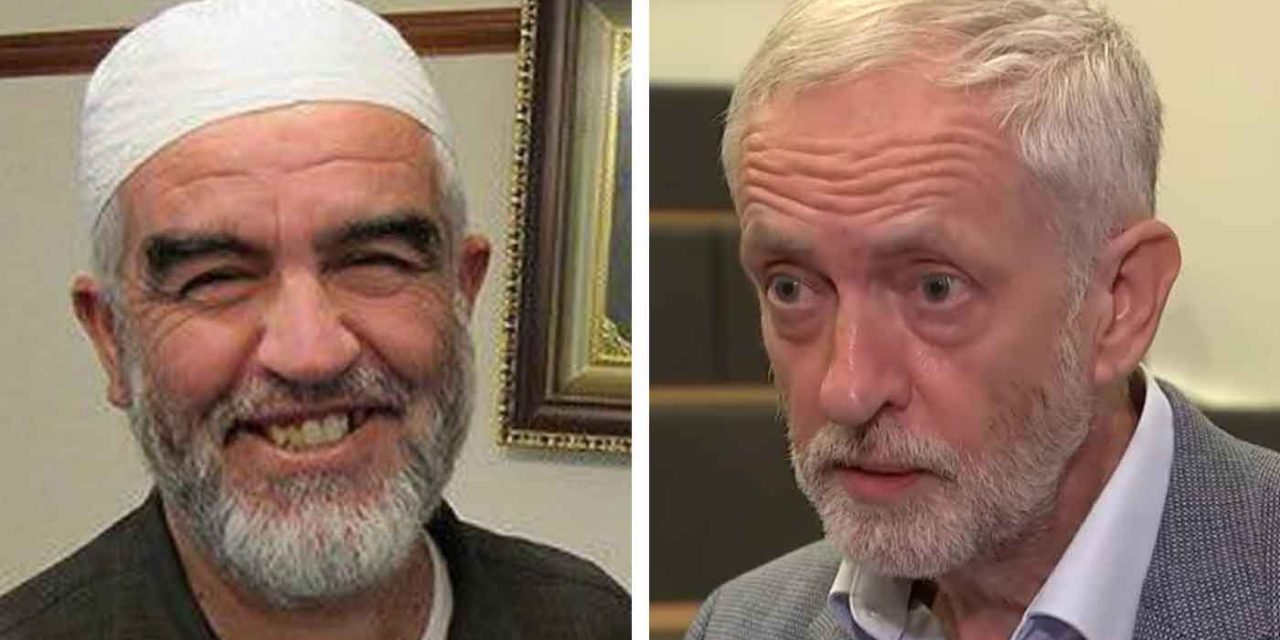 Jeremy Corbyn once called him an “honoured citizen” and invited him for tea in the Houses of Parliament “because he deserves it”. Corbyn also said that he was a “voice of Palestinian people that needs to be heard” and railed against the “Zionist lobby” for, what Corbyn says was their attempts to “conflate Criticism of Israel as anti-Semitism”.

Who is the man Corbyn was defending? Raed Salah, a radical Islamic cleric who has been jailed for inciting terrorism in Israel, the third time he has been imprisoned after being previously convicted of spouting anti-Semitism and funnelling funds to terror group Hamas.

Corbyn’s support for terrorists and those who hate Israel is well known, but it is important that the current leader of the opposition and a very influential person within British politics today remains unrepentant about his connections. Therefore, they should never be forgotten by the British public.

MUST WATCH AND SHARE:Hamas have tried to interfere with UK politics to get Corbyn elected.We can also reveal footage of Palestinian envoy Manuel Hassassian interfering with UK elections – also endorsing Corbyn!Corbyn and his key cabinet ministers voted against banning Hamas. Corbyn's senior advisor Seamus Milne, who is also Labour's media head, also has expressed support for Hamas.Corbyn himself in this video labels Israel the terrorists whilst supporting anti-Semites.This is a must see video for anyone questioning where Corbyn stands.#AntiSemitism #ChristiansAgainstAntiSemitism #Corbyn #Labour #Hamas #Hezbollah #NoToHamas #CUFI #PrayforUK #PrayforIsrael #DefendIsrael

Posted by Christians United for Israel – UK on Wednesday, 11 December 2019

This week it was reported that an Israeli court sentenced radical Islamic cleric Raed Salah to 28 months in jail for “inciting to terror” in speeches he made after a 2017 attack at the Temple Mount in Jerusalem in which two Israeli policemen were killed.

Salah, the head of the banned northern branch of the Islamic Movement in Israel, an offshoot of the Muslim Brotherhood movement, spoke at the funeral of the terrorists and told the gathered mourners, “In these moments, we are one house, one family. We part with our martyrs, and wish for them to join the prophets, the righteous and the martyrs. At these moments we pray to God to raise them up in heaven.”

Salah also repeatedly called for Palestinian “resistance” and warned his followers that Israel sought to destroy the Al Aqsa Mosque on the Temple Mount.

In his defense, Salah argued that his views were religious opinions rooted in the Quran, and did not constitute a direct call to violence.

Before this latest incident, Salah was already notorious for his anti-Semitism and hatred of Israel, even before Corbyn defended him. He referred to Jews as being “germs”, accused Israel of 9/11 and joked about his classmates writing a swastika on their Jewish teacher’s blackboard. And at an East Jerusalem protest in 2007, Salah said: “Whoever wants a more thorough explanation, let him ask what used to happen to some children in Europe, whose blood was mixed in with the dough of the [Jewish] holy bread.”

The blood libel that Jews used the blood of Christian babies is an age-old anti-Semitic trope that has lead to Jews being killed by non-Jews after they believed these false stories against them. The fact that a British politician would actively defend someone who said such as thing (as well as using his British taxpayer-funded time to do so) is an insult to Britain’s Jewish community.

"In 2012 Mr Corbyn campaigned to allow a notoriously antisemitic preacher activist into Britain. Raed Salah had called Jews the germs of all time and blamed them for 9-11."

Salah was also previously imprisoned for funnelling money to Hamas, the Palestinian terror group that rules the Gaza Strip and whom Jeremy Corbyn once called his “friends”.

Jeremy Corbyn infamously campaigned for Raed Salah to be free in the UK and invited him to tea in Parliament and was pictured with the radical Islamist at a pro-Hamas rally the same year. At that event, Corbyn shared the stage with notorious anti-Semites whilst calling for convicted terrorists to be released and accused Israel’s arresting of terrorists as being “war crimes”.

Corbyn also featured at a Hamas-backed event alongside Salah in Geneva. And in 2011, Corbyn wrote in defence of Raed Salah, saying, “It’s time that Western governments stood up to the Zionist lobby which seems to conflate criticism of Israel with anti-Semitism.”

It turns out Raed Salah is actually an anti-Semite who used anti-Semitic tropes to demonise Israel and the Jewish people. This is not conflating anti-Zionism with anti-Semitism but proving that many anti-Zionist views are fuelled by anti-Semitism. The fact that Corbyn cannot see the anti-Semitism of his friend should once again prove to everyone why Corbyn should never hold any seat of power within British politics.