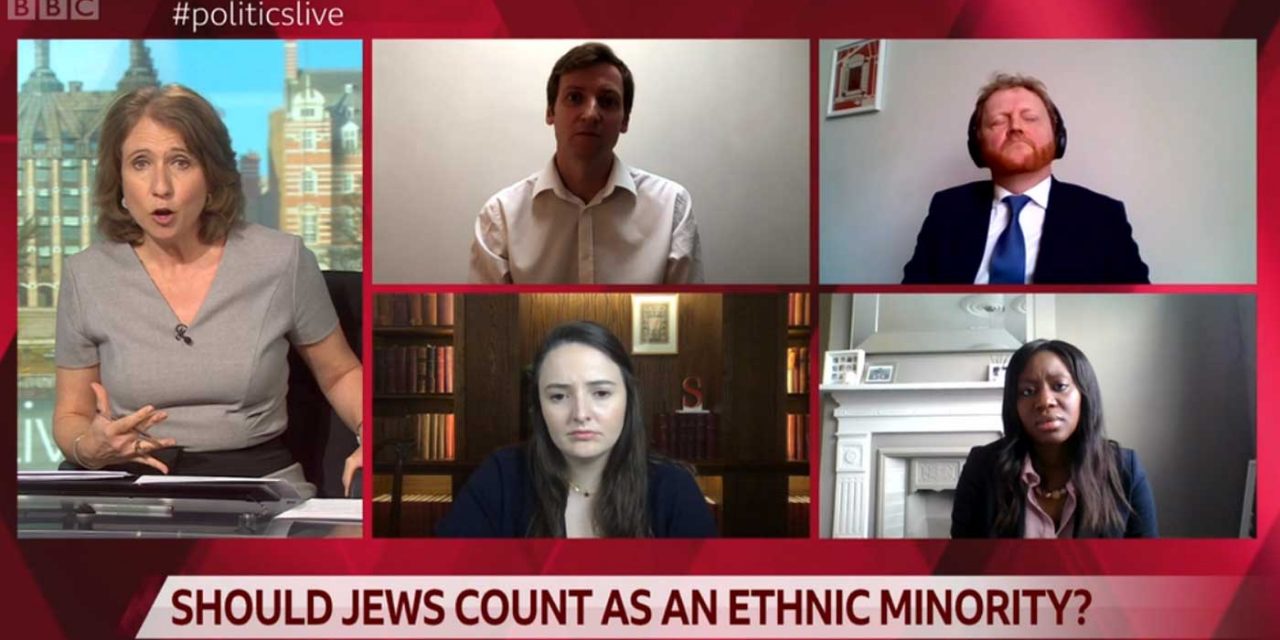 Britain’s national broadcaster has faced heavy criticism, including a petition calling for the BBC to apologise, after they aired a debate questioning if Jews should still count as an ethnic minority.

The debate took place on the BBC’s Politics Live programme on Monday after a social media post from Labour’s Deputy Leader, Angela Rayner, stirred controversy after she claimed Scottish Labour’s newly-elected leader is “the first ever ethnic minority leader of a political party anywhere in the UK”.

While Anas Sawar is the first person of Asian descent to lead a major political party, people rightly pointed out that Britain has had ethnic minorities lead parties before, namely Jewish people.

At least four party leaders have been Jewish, namely Benjamin Disraeli (Conservatives), Herbert Samuel (Liberals), Michael Howard (Conservatives) and Ed Miliband (Labour). There have been minority leaders in minor parties as well, one example is Salma Yaqoob who was the leader of the Respect Party (she has since joined the Labour Party).

Rayner’s statement was factually wrong, but instead of simply correcting it and apologising (as she has called on others who made similar mistakes in the past), Rayner has instead ignored the situation and inadvertently sparked these debates, much to the dismay of Britain’s Jewish community.

During the programme, BBC host Jo Coburn asked the question that because “many Jews have succeeded in reaching high political office” does it mean, therefore, that Jews “don’t need to be seen as a group needing recognition in the same way as others?”.

Responding to this question was the only Jewish person on the panel, Ben Cohen, the Editor of Pink News who stated that Jews “face antisemitism and racism very clearly” and referenced the Labour Party’s institutional antisemitism as evidence of this. He also defended the argument that because Jews are a religious group they don’t need to be an ethnic group by correctly pointing out that not all Jews practice Judaism and it is their ethnic identity that makes them Jewish.

Here I’m responding to @Jo_Coburn’s bizarre suggestion that as Jews have progressed so much in society they might not be “seen as a group deserving recognition” pic.twitter.com/a2lghii21V

British Jews are indeed an ethnic minority. There are around 250,000 Jews living in Britain today, and whilst they are well integrated and an integral part of our society, there is no doubt they are a specific ethnic group with their own identity and customs.

They are also one of the most discriminated against groups in the UK. There are more reported cases of hate crimes being committed against Jews than any other minority group in the UK.

Statistically, a Jewish person is four times more likely to be the victim of a hate crime than any other minority ethnic group. And thanks to widespread discrimination against Jews in the Labour party, anti-Semitism, which is racism and discrimination towards Jewish people, has sadly become a more familiar term to the British public over the last couple of years.

The Campaign Against Antisemitism (CAAS) has now called on the BBC to apologise with its petition, saying: “To hold a debate on whether or not we ‘count’ as an ethnic minority is appalling.”

The Board of Deputies has also criticised the clip, saying: “Our community deserves solidarity and support, not questions about whether we deserve any.”

This attempt to erase Jewish identity is not new.

As advocates for Israel, we often hear anti-Israel activists attempt to erase Jews as a minority group and accusations against Israel include a denial of Jewish identity which labels Jews as “white Europeans” or “colonialist settlers” instead of the truth which is that Israelis are Jews returning to and living in their ancient homeland.

It is sad that the BBC chose to insult the Jewish community and debate this subject. To even question whether Jews are an ethnic minority undermines their identity and plays into the hands of those who seek to delegitimise both Israel and the Jews who live there. The BBC may have been doing this inadvertently, but they did it nonetheless.

The Campaign Against Antisemitism has started a petition calling upon the BBC to apologise for this programme. You can find out more by clicking here. CAAS has no affiliation with CUFI, but we are happy to highlight this petition.

Also, if you would like to take a more long-term stand against anti-Semitism UK, you can do so by clicking on the links below, such as adding your name to our ‘Christians Against Anti-Semitism’ declaration or by signing our petition to ‘Save the Holocaust Memorial in Westminster’.