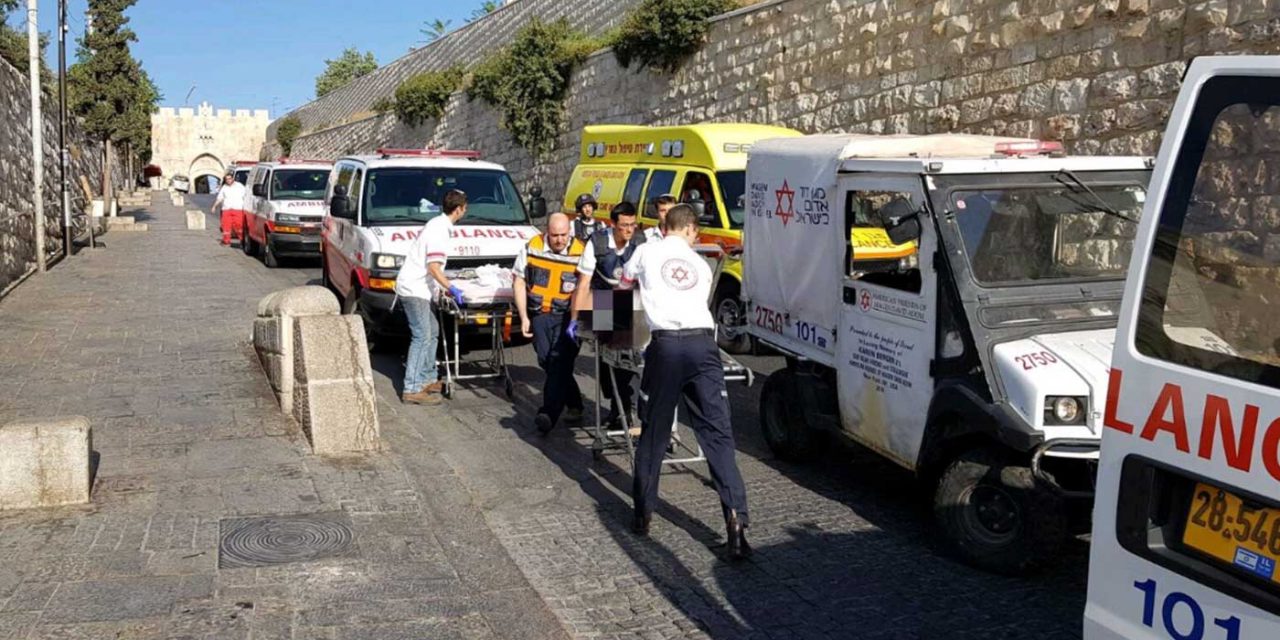 Two Border Police Officers have been killed in a shooting attack at the entrance to the Temple Mount in Jerusalem. Another police officer was also wounded.

The terror attack took place on Friday morning in Jerusalem’s Old City when three Israeli-Arabs left the Temple Mount armed with guns and knives, walked towards the Lions Gate and shot the Israeli police officers.

The three terrorists then fled the scene, trying to escape back towards the mosques on the Temple Mount. Israeli officers gave chase, eventually catching up to them and shooting all three dead.

Video footage shows one of the terrorists on the floor, surrounded by policemen, when he quickly stands up and lunges at a police officer, presumably with a knife, and kicks at him before being shot multiple times.

WARNING: The following video contains footage that some viewers may find disturbing.

Magen David Adom paramedics said, “Near the Lions Gate, policemen led us to three men injured with bullet wounds. We noticed three men in their thirties who were receiving preliminary medical treatment from fellow policemen.”

“Two were in severe condition, we provided them with lifesaving treatment and after minutes, transferred them onto intensive care units and evacuated them to the hospital.

“The third victim was fully conscious. He was suffering of wounds to his neck and limbs, and following medical treatment on the scene he was also evacuated in moderate condition.”

All of the victims had bullet wounds and were evacuated to Hadassah Hospital’s Mount Scopus campus, where two of the victims, the policemen named above, were later pronounced dead.

The Jerusalem District Command ordered the Temple Mount evacuated and all entrances closed. Friday prayers canceled at Temple Mount will not take place, for the first time since 2000.

The Grand Mufti of Jerusalem, Sheikh Muhammad Hussein, told Palestinian news agencies he had been prevented him from entering the complex. “We insist on reaching Al-Aqsa mosque and performing prayers there. The occupation preventing us from praying marks an assault against our right to worship in this pure Islamic mosque,” he said.

Public Security Minister Gilad Erdan (Likud) said, “The terror attack today was a severe and difficult event, and the terrorists crossed several red lines. We are still investigating the attack, and we will need to examine the security situation on the Temple Mount and its environs.”

“I call on every public leader to work to calm the public and preserve the quiet in Jerusalem.”