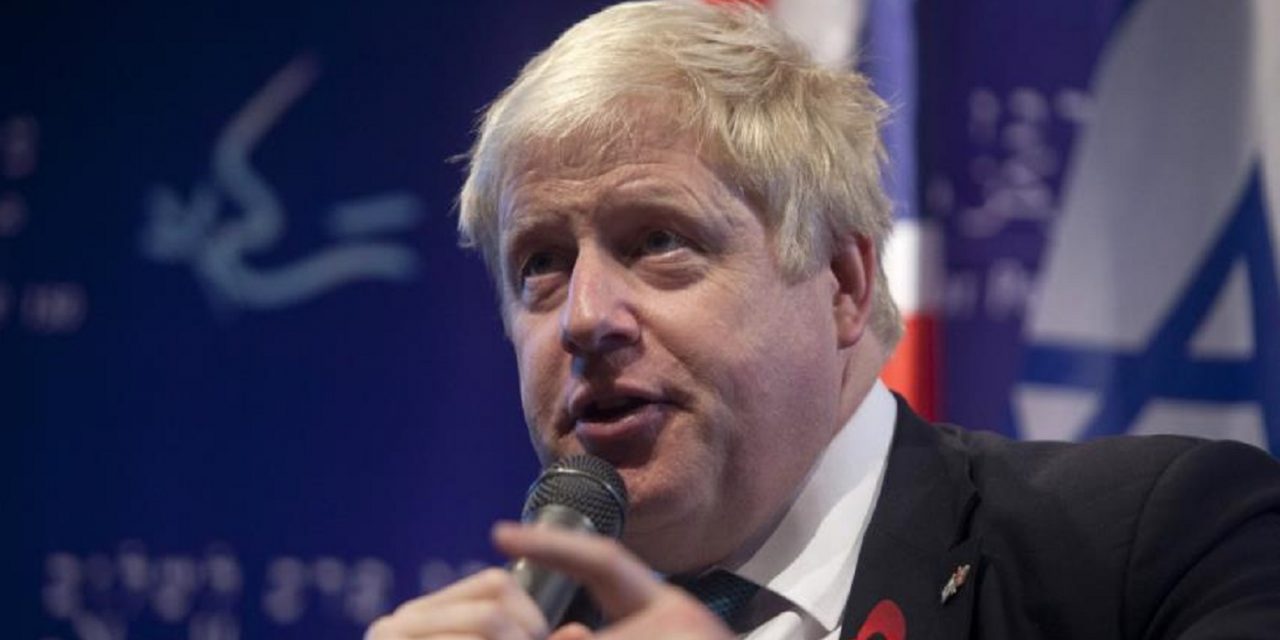 Foreign Secretary Boris Johnson has expressed his pride about the Balfour declaration but has come under criticism for referring to the declaration’s “unfulfilled nature”.

During a parliamentary reception held on Monday night at the official residence of the Speaker of the House of Commons, Johnson said: “The Balfour Declaration, whatever its defects, whatever its unfulfilled nature, paved the way for one of the greatest political triumphs of the 20th century, the creation of the State of Israel, which, after all, is a democracy, a liberal society, a beacon of hope and which shares the values in which I passionately believe. This is an amazing achievement by humanity.”

“Speaking as an ex-kibbutznik, who spent most of his time doing the washing up, I recognize the magic, the genius, and miracle of Israel. And that is why we should mark Balfour with pride and with respect,” he added.

The “unfulfilled nature” he spoke of, referred to the caveat in the Balfour Declaration that “nothing shall be done which may prejudice the civil and religious rights of existing non-Jewish communities.”

In his opinion piece for the Telegraph on Sunday, Johnson said he did not believe this had been fully realised and asserted that a two-state solution could help achieve this.

“Boris Johnson is a long-standing friend of Israel, and – as the original recipients of the historic document – the ZF welcomes his rightful championing of the Balfour Declaration. Nonetheless, whether by accident or design, he is wrong to imply that if the declaration’s promise that nothing should be done to prejudice the rights of non-Jews remain unfulfilled, Israel is to blame. A cursory examination of the Jewish state shows that its creation has in fact elevated the rights of its non-Jewish citizens, given the tormented status of the wider region.”

The statement continued, “And while the rights of Palestinians in the West Bank and Gaza are frequently compromised, the blame for that lies with their leaders – autocrats and theocrats no different from other Middle Eastern rulers. Only when those leaders acknowledge their role in violently rejecting the Balfour Declaration and a Jewish homeland will the peace that both sides need be possible.”

Last week Board of Deputies’ president Jonathan Arkush reacted when Britain’s Deputy Ambassador to the United Nations, Jonathan Allen, told a meeting in New York that there are “two halves of Balfour, the second of which has not yet been fulfilled,” adding: “There is unfinished business.”

Arkush said Allen’s comments were “unworthy, hostile, unbalanced, negative and evidently intended as criticism of the State of Israel,” but this week Johnson stood by the young British diplomat by making the same point.

Also on Monday, Boris Johnson gave an address in Parliament (Read in full). In the speech he said “I believe that the Balfour declaration paved the way for the birth of a great nation. The state of Israel has prevailed over every obstacle, from the harshness of nature to the visceral hostility of its enemies, to become a free society with a thriving and innovative economy and the same essential values that we in Britain hold dear. Liberty, democracy and the rule of law have found a home in Israel—more so than anywhere else in the middle east. Most of all, there is the incontestable moral purpose of Israel to provide a persecuted people with a safe and secure homeland.”

He continued, “[Her Majesty’s Government] are proud of Britain’s part in creating Israel, and we shall mark the centenary of the Balfour declaration on Thursday in that spirit.

However in remarks echoing his piece in the Telegraph, Johnson said,

“I see no contradiction in being a friend of Israel and a believer in that country’s destiny while also being profoundly moved by the suffering of those who were affected and dislodged by its birth. That vital caveat in the Balfour declaration—intended to safeguard the rights of other communities, by which, of course, we mean the Palestinians —has not been fully realised. In the words of Amos Oz, the Israeli novelist, the tragedy of this conflict is not that it is a clash between right and wrong, but rather a ‘clash between right and right'”.