Billboards outside Labour HQ over failure to tackle anti-Semitism 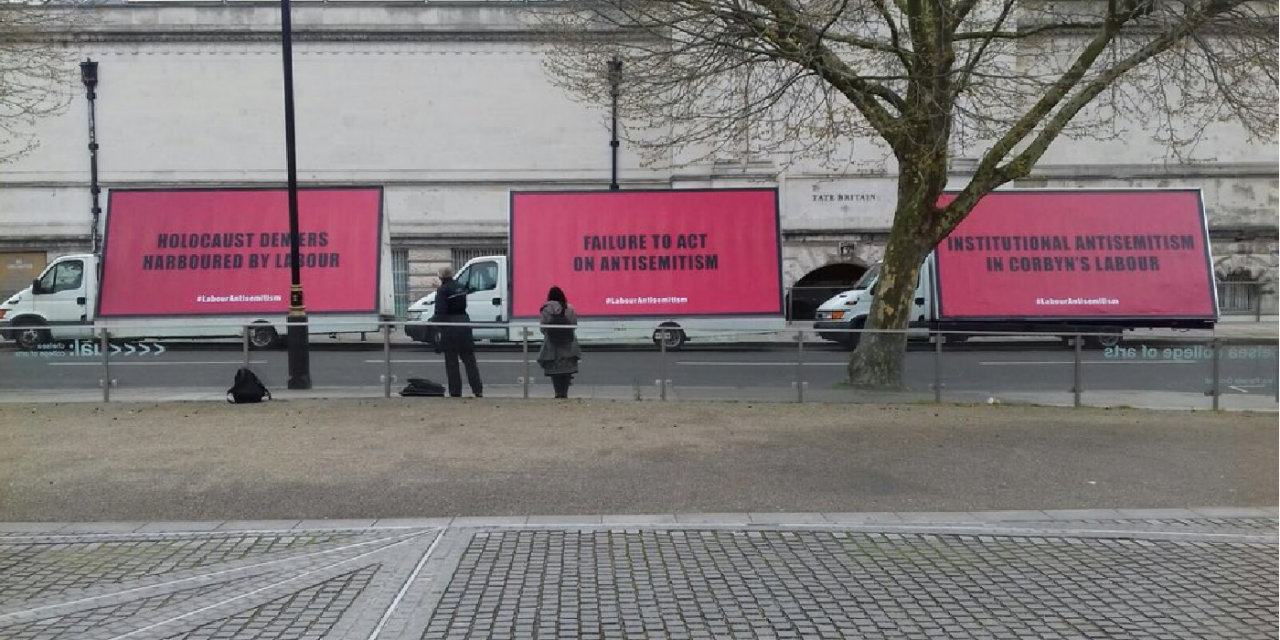 Three mobile billboards appeared outside Labour HQ this morning to protest the party’s failure to act on anti-Semitism.

The protest comes as MPs are set to meet later today to debate antisemitism in Parliament.

Organised by a group of Jewish activists, the “Community United against Labour Party Anti-Semitism” (CULPA), the three pink billboards made reference to the Oscar-nominated film “Three Billboards Outside Ebbing, Missouri.”

CULPA raised £4,665 pounds in a crowdfunding campaign involving 130 donors, with adverts appearing around Westminster between 8am and 4pm today.

The ads were driven on a route including Victoria Street, where the party’s headquarters are located, as well as past Parliament Square, Westminster Bridge, Lambeth Palace Road, York Road, Belvedere Road, Millbank, Lambeth Bridge, Whitehall, Strand, and Waterloo Bridge.

The billboards bore the following messages “Holocaust deniers harboured by Labour”, “failure to act on anti-Semitism” and “Institutional anti-Semitism in Corbyn’s Labour”.

This peaceful protest was also promoted and supported by Labour member and ex-members who are concerned with the anti-Semitic crisis under Jeremy Corbyn.

CULPA spokesperson Jonathan Hoffman said “This is a grassroots action borne of intense frustration at the lack of action by Jeremy Corbyn. There is no indication that he takes anti-Semitism seriously. No recognition that for Jews anti-Semitism is not just a matter of bad behaviour, it is a matter of survival. If he is unwilling or unable to deliver on the fight against anti-Semitism, then Labour must find someone who can.”