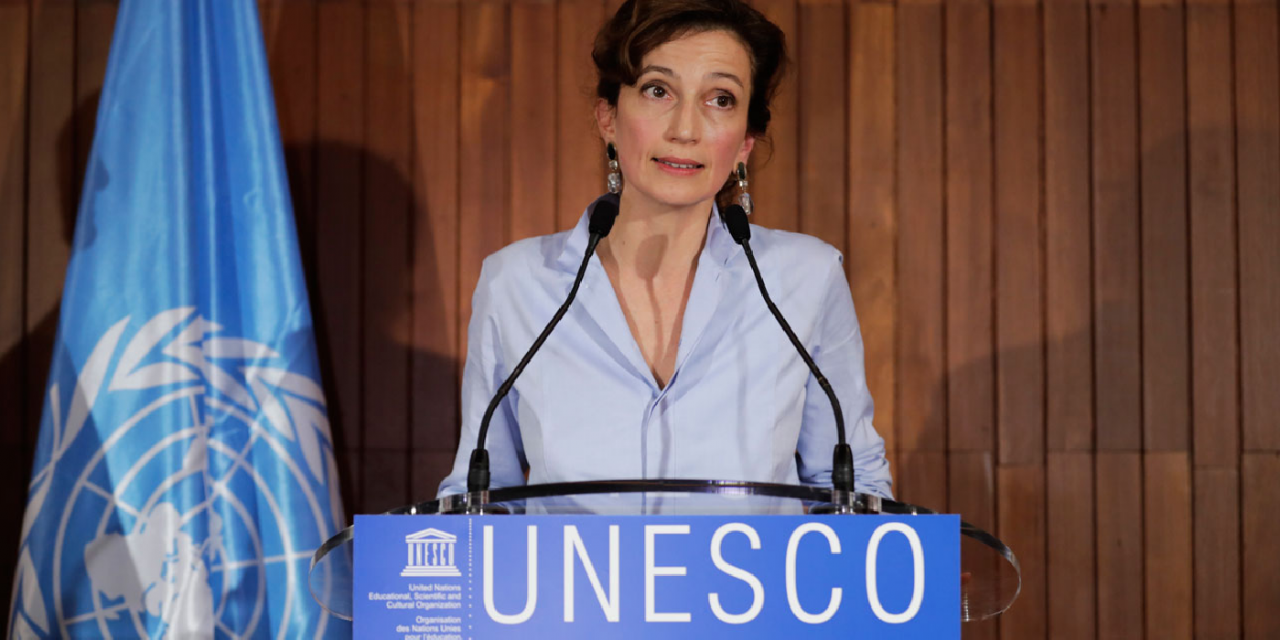 The United Nations Organization for Education, Science, and Culture (UNESCO) has agreed unanimously to delay by at least six months voting on two anti-Israel resolutions that an Israeli official had denounced as “the most extreme and problematic text” ever proposed.

UNESCO’s new Director-General, Audrey Azoulay, welcomed the decision, saying “It is a very important day for UNESCO and its executive board,” she said. “And I welcome the spirit of dialogue and responsibility that was shown today in the discussions regarding the Middle East, where for once — and it’s been a long time since it has happened – we’ve been able to reach a consensus without vote on the sensitive issues.”

I welcome the spirit of dialogue and responsability that has allowed a consensual decision to be reached in the framework of the Executive board during its discussions concernant the Middle East.

Thanking the Israeli, Palestinian, Jordanian, American and EU delegations for actively supporting the dialogue, Azoulay also hoped that this rare agreement would be “a moment on which we can build” to restore “peace, dialogue, and cooperation” on UNESCO’s mandate. This, she stressed, was to work together for the advancement of science, culture, education and freedom of expression

“This spirit of consensus opens up a new positive dynamic within UNESCO. I thank all the delegations that have worked towards this, notably the representatives of the Palestinian, Israeli, Jordanian, American, and European Union delegations,” she wrote. “This outcome bears witness to the Parties’ strong commitment to work together, including on the most sensitive issues.”

Israel’s delegate, Carmel Shama-Cohen, thanked the Palestinian Authority and Jordan for “their positive and constructive approach” to the negotiations but stressed Israel’s commitment to avoid political agendas to influence this international entity, in particular.

“In the name of the State of Israel and myself, I would like to convey our big appreciation to all those who helped to reach the consensus today,” the ambassador, Carmel Shama-Hacohen, said.

“Taking into consideration the difficult situation on the ground in our region and along some of our borders, the consensus today is a living proof that with good will from all sides we can prevent political clashes in this organization and we can avoid dealing with issues that should be dealt with elsewhere, if at all,” he said.

UNESCO has been criticised for having an evident anti-Israel bias. For example, Arab and Muslim countries have pushed to pass anti-Israel resolutions such as the denial of Jewish ties to the Temple Mount, the rejection of Israel’s sovereignty over Jerusalem and the listing of Hebron’s Old City, as a Palestinian World Heritage Site.

However, the Arab and Muslim countries’ response may cause Israel and the US to change retract from their decision to leave the UNESCO.

“If we all had followed the spirit of good will, respect, and understanding toward each other’s sensitivities, it is highly likely that things might look different today,” said Shama-Hacohen.

“The US delegation warmly welcomes the progress demonstrated here today and congratulates the parties for taking the steps necessary for a constructive approach to a very difficult and sensitive file,” its mission posted on its website.