Tottenham Hotspur Football Club and the BBC are among the first to advise their personnel to drop any physical or overt display of support for the Black Lives Matter movement, including the wearing of badges and ‘taking the knee’, following concern over anti-Semitic and anti-Israel social media posts by groups linked to BLM, according to reports in the Telegraph.

The Black Lives Matter movement in the UK (BLMUK) came under criticism after it claimed politics is “gagged of the right to critique Zionism”.

BLMUK told its nearly 60,000 followers on Twitter: “As Israel moves forward with the annexation of the West Bank, and mainstream British politics is gagged of the right to critique Zionism, and Israel’s settler colonial pursuits, we loudly and clearly stand beside our Palestinian comrades. FREE PALESTINE.”

A senior source told the publication: “The BBC cannot be seen to support any kind of cause over another, and Black Lives Matter is certainly a campaign. Therefore we wouldn’t want anyone on-screen to be wearing visual symbols of support.

BT and Sky have given their football commentators the choice to wear the badge or not, with Jamie Redknapp and Patrice Evra appearing to have dropped the symbol while appearing on Sky Sports on Tuesday.

Premier League chief executive Richard Masters told a Digital, Culture, Media and Sport committee session: “We are drawing a clear distinction between a moral cause and a political movement or agenda.

“Whilst there might be difficulties sometimes dividing the two, our position is clear: politics no, moral causes yes, when agreed. As I said we’re living in special times at the moment.”

Jewish News reports that the Board of Deputies of British Jews president Marie van der Zyl criticised the movement over a tweet on Sunday, saying it was “beyond disappointing” that a “supposedly anti-racist organisation has leaned into the antisemitic trope that British politics is “gagged” in terms of debating Israel, a claim particularly preposterous because Israel is one of the most-discussed foreign policy issues in this country. However, the failings of this particular group will not stop us standing alongside black people in their quest for justice, whether inside or outside our community.” 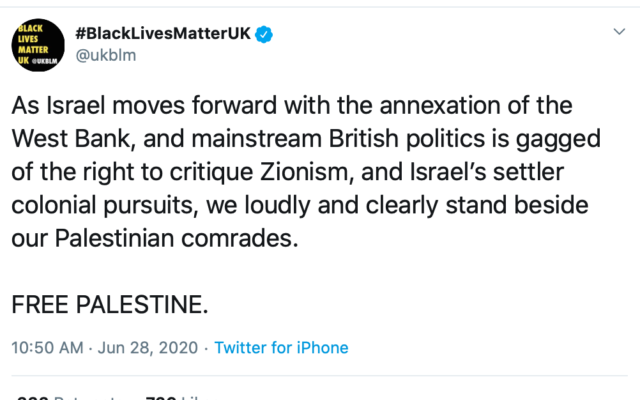