BBC criticised as headline suggests Palestinian murderer is the victim

The BBC has come under criticism of anti-Israel reporting after its headline of a Palestinian terrorist murdering two Israelis and wounding two more read, “Palestinian shot dead after Jerusalem attack kills two”.

The above headline was reporting the story of a nineteen year-old Palestinian who attacked a young family on the streets of Jerusalem on Saturday, stabbing to death the father and another man who came to help, seriously injuring the mother and injuring their two-year-old baby.

The headline should have read something like, “Palestinian terrorist kills two, injures two in Jerusalem”, but instead, the BBC chose to twist the story to give the impression that a Palestinian had been the victim of Israeli aggression. 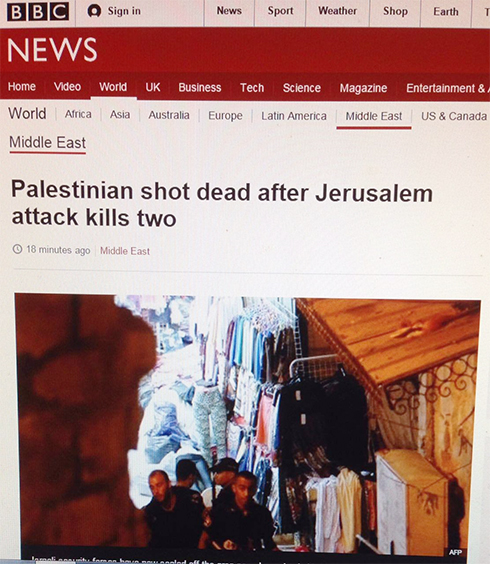 YNet News launched an inquiry against the BBC after it discovered the shocking headline and accused the BBC of bias in favour of the Palestinian attacker whose death was the main focus of the headline, despite the fact he had killed two Israeli civilians.

In response to YNet News, a BBC spokesperson admitted that the headline “didn’t accurately reflect the events, nor the details reported in our online story,” but fell short of an apology, YNet reports.

Instead the spokesperson pointed out that the BBC had changed the headline “of our own accord”.

The headline was replaced, but the second version was hardly more welcomed by Jewish readers.  “Israelis killed in old City ‘by Palestinian’,” it read. Suggesting that the identity of the attacker was under dispute, unknown or alleged and not one the BBC would stand behind.

Eventually, as the story developed fully, the headline was changed again to its current title, “Israelis killed in Jerusalem, Palestinians banned from Old City.”

This is another shocking display of media bias against Israel and a growing list of incidents by the BBC. It seems they are quick to paint Israel in a bad light regardless of the facts.  Viewers have also noted that this fatal attack hardly received a mention in the British news, while incidents where Israel can be blamed receive a lot of media attention.