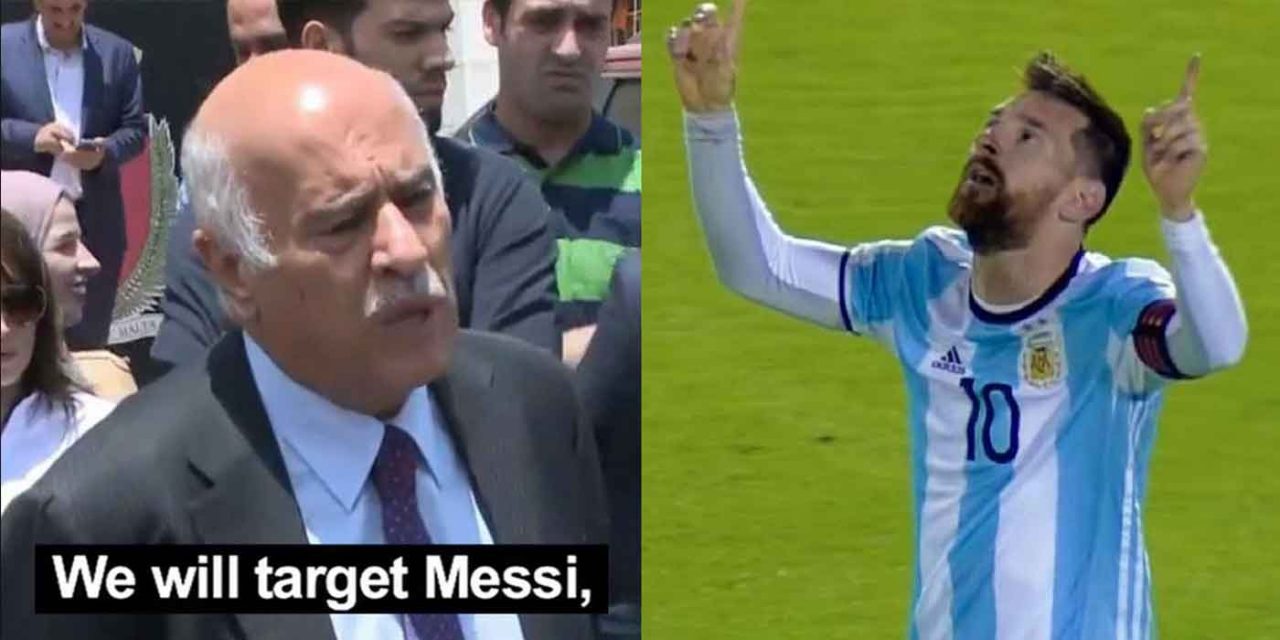 The anti-Israel lobby has been celebrating what they claim is a “victory for BDS”. It turns out the Argentinian Football Association cancelled the match because of the Palestinian threats against Messi and the team.

SIGN THE PETITION – Get Palestinian FA Chief “kicked out” of the FA for inciting threats against Messi and the Argentinian team.

Yesterday, the president of the Argentine Football Association (AFA) stated exactly that, saying, “What has happened in the last 72 hours, that you know; the actions, the threats that have occurred, have led us to take the decision not to travel.”

The threats of violence, including death threats, came after the head of the Palestinian Football Association called for fans to “target Messi personally” and headed up a campaign against Messi and his team.

SIGN THE PETITION – Get Palestinian FA Chief “kicked out” of the FA for inciting threats against Messi and the Argentinian team.

CUFI UK has started a petition calling on FIFA to kick Jibril Rajoub out of FIFA and to take action against the Palestinian Football Association’s hate filled campaign against Israel.

The full wording of our petition is as follows:

We call upon FIFA to “kick out” Jibril Rajoub, the Chairman of the Palestinian Football Association (PFA) and take action against the PFA after Rajoub deliberately called for people to target Lionel Messi, resulting in threats of violence against him and the Argentinian team.

Rajoub made his threats as he objected to a friendly match between Israel and Argentina that was supposed to take place on Saturday, 9 June, but has been cancelled due to the threats of violence.

On 3 June 2018, Jibril Rajoub said in a TV interview, “Starting from today we [the PFA] will start a campaign against the Argentinian [Football] Association… we will target Messi and will demand that everyone burn their [Messi] shirts and pictures and renounce him”.

In another TV interview, Rajoub speaks in English and warns Messi, “Don’t come… you will lose fans all over the world.”

Rajoub’s comments incited a torrent of online abuse, including threats of physical violence against an individual player, Lionel Messi, and his family, as well as his team-mates and staff of the Argentinian football team.

This behaviour from the head of a Football Association is NOT ACCEPTABLE!

On top of this, protests incited by the PFA campaign took place outside the Argentinian training camp in Spain, holding team shirts splatted in red paint (to look like blood) in order to intimidate the team. All of these protests went beyond the boundaries of what FIFA should view as acceptable, and yet all of these were condoned, endorsed and supported by the Jibril Rajoub and the Palestinian FA.

These threats were enough for Argentina to cancel their game against Israel with the head of the Argentinian FA stating that “the threats that have occurred have led us to take the decision not to travel.”

To add insult to injury, Jibril Rajoub, after incited hatred and threats against Messi and his teammates, had the nerve to hold a press conference and thank Argentina and Messi.

No team should be intimidated or threatened for playing a game of football against another country and FIFA should do all it can to protect its players and teams from this kind of behaviour in the future.

Likewise, every Football Association that is connected with FIFA should be required to keep politics out of football. They must agree to the standards of FIFA that allows all teams from all countries to play together freely without discrimination, threats or racist abuse.

This is not the first time the Palestinian FA or Jibril Rajoub have used their position to launch political attacks against Israel.

Last year FIFA President Gianni Infantino sent UN Secretary-General António Guterres a letter saying that FIFA is tired of dealing with political issues, stating “We are not a playground for the Israeli-Palestinian conflict.”

Once again, Jibril Rajoub and the Palestinian Football Association have used their position to score political points against Israel. This time, however, they have stirred up hatred and endangered the lives of players.

The actions of Jibril Rajoub and the Palestinian FA have brought FIFA into disrepute and cast a shadow over “the beautiful game” of football that should be open to all.

We the undersigned call upon you, FIFA, to kick Jibril Rajoub out of the Palestinian FA and to take swift and robust action against the Palestinian FA for their continued abusive behaviour. They must not be allowed to continuing acting this way.

FIFA – You must protect teams and players from these threats. Kick politics and hatred out of football!

SIGN THE PETITION – Get Palestinian FA Cheif “kicked out” of the FA for inciting threats against Messi and the Argentinian team.