Anti-Semitism on display at anti-Balfour march in London 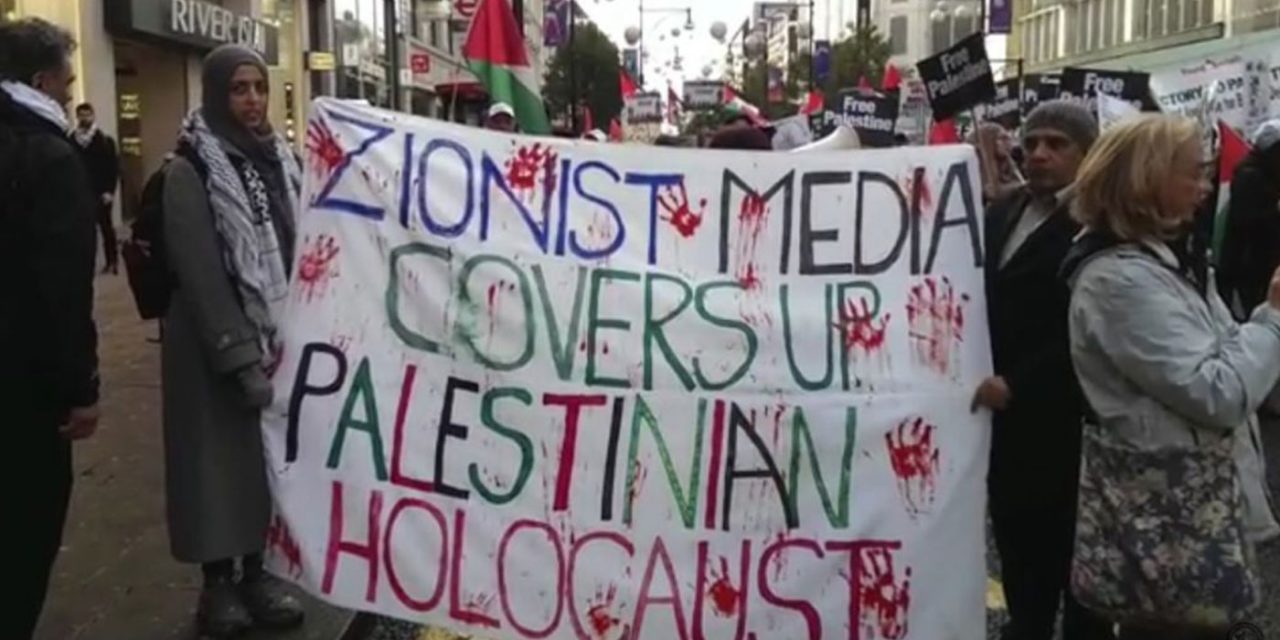 An anti-Israel protest that took place in London over the weekend was replete with anti-Semitic messages as thousands gathered to protest the centenary of the Balfour Declaration.

The march started outside the US Embassy in Grosvenor Square, went through Piccadilly Circus and Trafalgar Square and ended in Parliament Square outside the Houses of Parliament. The march was attended by “thousands” of demonstrators, but they did not have the streets to themselves. Half way through the match they were forced to stop momentarily when they were met with a large group of pro-Israel supporters waving Israel flags to challenge them. The stand off ended peacefully and the march continued.

When the protesters gathered in Parliament Square they heard a series of speech including a pre-recorded video message from the Labour leader, Jeremy Corbyn, who called for the recognition of Palestine. The crowd reportedly responded by singing, “Oh, Jeremy Corbyn”.

Campaign Against Antisemitism were on the ground filming the march and participating in it to gather information.

As with all these events, a familiar anti-Semitic chant sounding out from the crowd was the popular “From the River to the Sea Palestine will be free”.

On the surface this chant sounds harmless, but when you know the meaning of it, it is literally calling for the destruction of Israel. They are saying that from the Jordan River to the Mediterranean Sea, “Palestine” will be free. In order for that to happen, it would mean that Israel would be replaced in its entirety with “Palestine”. Therefore, it is an anti-Semitic chant as the calling for the destruction of Israel is anti-Semitic.

One sign found within the crowd claimed “Zionist media covers up Palestinian Holocaust.”

According to the International Definition of Antisemitism, “Making mendacious, dehumanising, demonising, or stereotypical allegations about Jews as such or the power of Jews as collective — such as, especially but not exclusively, the myth about a world Jewish conspiracy or of Jews controlling the media, economy, government or other societal institutions” and “Drawing comparisons of contemporary Israeli policy to that of the Nazis” is anti-Semitic.

Another sign being held up claimed “Israel’s actions cause anti-Semitism”.

While there was a lot of anti-Semitism on display, there was also one promising development which is that it appears organisers of the event dissuaded participants from flying Hezbollah flags during the protests.

We are not sure if this is because they were directed by police to do so, or if they are trying to distance themselves from the terrorist group. It may also be an attempt to minimise publicity which fuels the calls for the banning of Hezbollah.

More than 13,000 people have signed our petition to ban Hezbollah in the UK, please sign it by clicking this link if you have not already done so.

Unfortunately, these anti-Israel protests never seem to take place without a healthy dose of anti-Semitic sentiment and the above information is just a few examples. While we are often told that anti-Zionism is not anti-Semitism, the reality seems they are more intricately linked than politicians and the media dare to admit.

The march was organised by the Palestine Solidarity Campaign (PSC), Palestinian Forum in Britain (PFB), Friends of Al Aqsa (FOA), Stop the War Coalition (STW) and the Muslim Association of Britain (MAB).