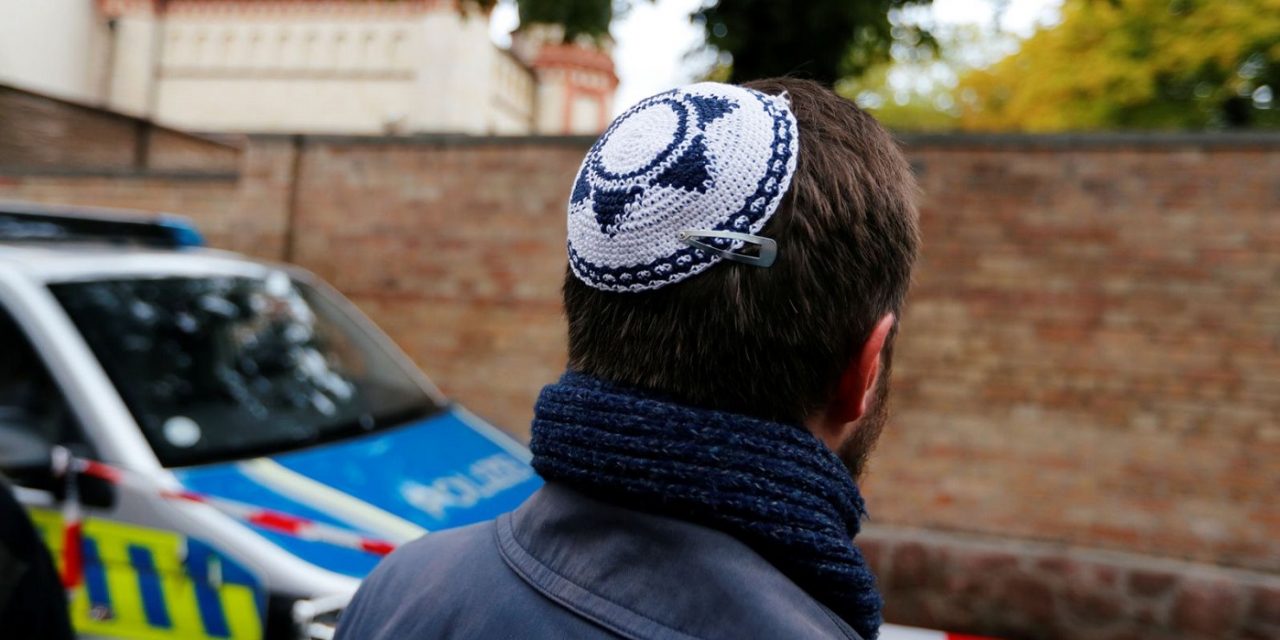 As Jewish worshippers in the eastern German town of Halle observed Yom Kippur, an anti-Semitic, neo-Nazi gunman made several attempts to enter the synagogue but failed to get inside.

The attacker tried to force his way by shooting at a locked door where 70-80 congregants were saying prayers on the holiest day of the year for Jews.

During the failed attempt, the gunman shot and killed a passer-by before killing a man in a kebab shop.

The head of Halle’s Jewish community, Max Privorozki, told German news magazine Der Spiegel that a camera at the entrance of the synagogue showed a person trying to break into the building.

“The assailant shot several times at the door and also threw several Molotov cocktails, firecrackers or grenades to force his way in,” he said. “But the door remained closed – God protected us. The whole thing lasted perhaps five to 10 minutes.”

A witness from the #HalleShooting recounts the events: We were in the middle of praying and then we heard a "boom" and then a second "boom." Someone looked at the camera and saw a suspicious man; we waited upstairs for 20 minutes until the police arrived. pic.twitter.com/T5yUOlHhBR

The rampage was streamed live for 35 minutes on Twitch and eventually seen by some 2,200 people, the online platform said, in a chilling reminder of the mosque attack in Christchurch, New Zealand, last March, which was also online in real-time.

Privorozki said there were 70 or 80 people inside the synagogue when the shooting occurred. Footage also shows the assailant laying a home-made explosive outside and uttering anti-Semitic statements.

Following the horrific attack, congregants of the Halle synagogue were filmed singing and dancing on a bus that was transporting them from hospital. According to one member, the synagogue worshippers finished the Ne’ila prayer – the concluding prayer for Yom Kippur – inside the hospital.

There were scenes of singing and dancing last night as dozens of Jewish worshippers who were inside the Halle synagogue at the time of the anti-Semitic attack return from hospital to safety by a special bus. The man interviewed says that they concluded Ne'ila prayer – the concluding prayer for Yom Kippur – inside the hospital. "Am Yisrael Chai"

Posted by Christians United for Israel – UK on Thursday, 10 October 2019

A German prosecutor says the attacker in the German city of Halle wanted to carry out a “massacre” in a synagogue and had about four kilograms (nearly nine pounds) of explosives in his car.

Germany’s chief federal prosecutor Peter Frank says that many questions remain about the suspect who is now in custody, a German citizen identified by media as Stephan Balliet.

Investigators still have to determine how he got hold of the material to build homemade weapons and explosives and whether anyone knew of his plans.

Frank told reporters in Karlsruhe that “what we experienced yesterday was terror.” He says that the suspect wanted to create a “worldwide effect” by livestreaming his attack, in which two people were killed outside the synagogue. He wanted to encourage others to imitate him.

Balliet is suspected of two counts of murder and nine of attempted murder.

The head of the Central Council of Jews in Germany ripped into the authorities for failing to provide adequate security on such a key day.

“It is scandalous that the synagogue in Halle is not protected by police on a holiday like Yom Kippur,” said Josef Schuster.

“This negligence has now been bitterly repaid.”

German Chancellor Angela Merkel went to a synagogue in Berlin the night of the attack to attend a vigil for the victims. A government spokesman told the media that the chancellor condemned the shooting and expressed her solidarity “for all Jews on the holy day of Yom Kippur.”

Meanwhile German Foreign Minister Heiko Maas said on Twitter, “Shots being fired at a synagogue on Yom Kippur, the festival of reconciliation, hits us in the heart. We must all act against anti-Semitism in our country.”

“All our country’s citizens of Jewish faith can be sure that we are with them with our whole heart and we will give them all the security that is possible,” Vice Chancellor Olaf Scholz said.