The Lord is my strength and song 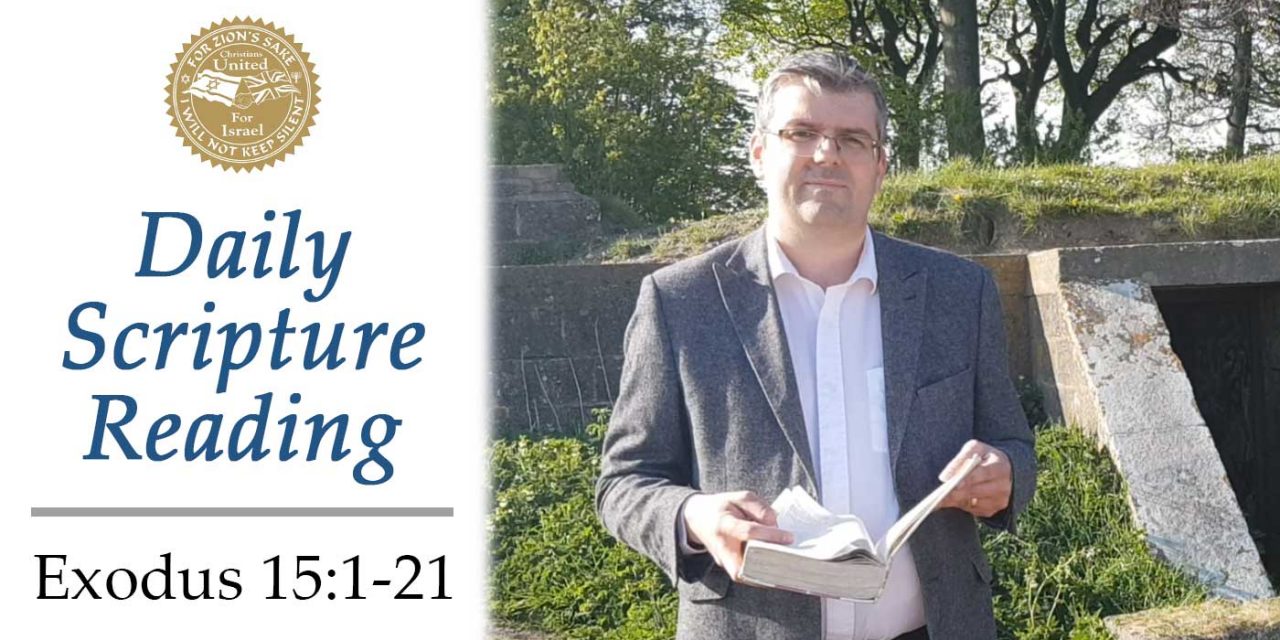 "I will sing to the Lord for He has triumphed gloriously."We pray you are encouraged by the reading of God's Word today.#TrustGod #DailyScripture #WatchAndPray #CUFI

Posted by Christians United for Israel – UK on Tuesday, 28 April 2020

The Song of Moses

1 Then Moses and the children of Israel sang this song to the Lord, and spoke, saying:

“I will sing to the Lord,
For He has triumphed gloriously!
The horse and its rider
He has thrown into the sea!
2 The Lord is my strength and song,
And He has become my salvation;
He is my God, and I will praise Him;
My father’s God, and I will exalt Him.
3 The Lord is a man of war;
The Lord is His name.
4 Pharaoh’s chariots and his army He has cast into the sea;
His chosen captains also are drowned in the Red Sea.
5 The depths have covered them;
They sank to the bottom like a stone.

6 “Your right hand, O Lord, has become glorious in power;
Your right hand, O Lord, has dashed the enemy in pieces.
7 And in the greatness of Your excellence
You have overthrown those who rose against You;
You sent forth Your wrath;
It consumed them like stubble.
8 And with the blast of Your nostrils
The waters were gathered together;
The floods stood upright like a heap;
The depths [a]congealed in the heart of the sea.
9 The enemy said, ‘I will pursue,
I will overtake,
I will divide the spoil;
My desire shall be satisfied on them.
I will draw my sword,
My hand shall destroy them.’
10 You blew with Your wind,
The sea covered them;
They sank like lead in the mighty waters.

11 “Who is like You, O Lord, among the [b]gods?
Who is like You, glorious in holiness,
Fearful in praises, doing wonders?
12 You stretched out Your right hand;
The earth swallowed them.
13 You in Your mercy have led forth
The people whom You have redeemed;
You have guided them in Your strength
To Your holy habitation.

14 “The people will hear and be afraid;
Sorrow[c] will take hold of the inhabitants of Philistia.
15 Then the chiefs of Edom will be dismayed;
The mighty men of Moab,
Trembling will take hold of them;
All the inhabitants of Canaan will melt away.
16 Fear and dread will fall on them;
By the greatness of Your arm
They will be as still as a stone,
Till Your people pass over, O Lord,
Till the people pass over
Whom You have purchased.
17 You will bring them in and plant them
In the mountain of Your inheritance,
In the place, O Lord, which You have made
For Your own dwelling,
The sanctuary, O Lord, which Your hands have established.

18 “The Lord shall reign forever and ever.”

19 For the horses of Pharaoh went with his chariots and his horsemen into the sea, and the Lord brought back the waters of the sea upon them. But the children of Israel went on dry land in the midst of the sea.

The Song of Miriam
20 Then Miriam the prophetess, the sister of Aaron, took the timbrel in her hand; and all the women went out after her with timbrels and with dances. 21 And Miriam answered them:

“Sing to the Lord,
For He has triumphed gloriously!
The horse and its rider
He has thrown into the sea!”