The ‘Wonder Woman’ at the United Nations 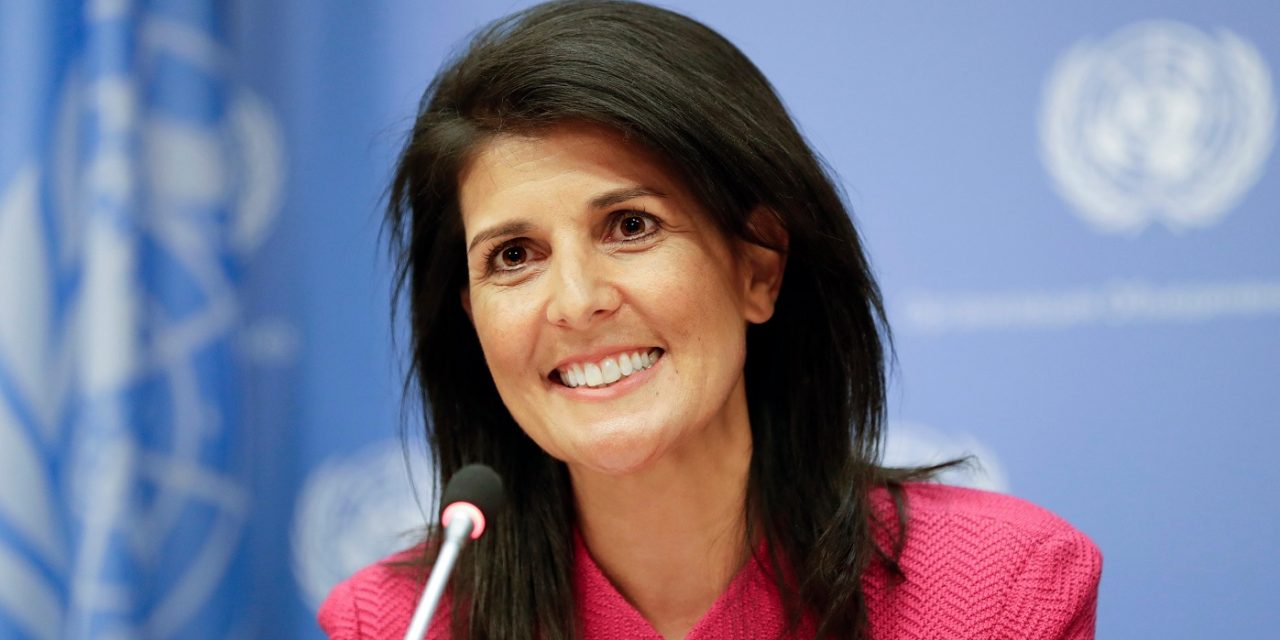 For many people that support Israel, ‘Nikki Haley’ is becoming a familiar name. After her appointment as the US Ambassador to the United Nations, Haley has been shaking up how the UN goes about its business, especially in the Israel-bashing department.

President Trump chose Ambassador Haley for the role specifically because of her pro-Israel stance, along with her track record of making things happen.

As Governor of South Carolina she led the way in countering the anti-Israel Boycotts, Divestment and Sanctions (BDS) movement. In 2015 South Carolina was the first state to pass a law banning state funds going to companies engaged in anti-Israel boycotts and Nikki Haley personally signed the bill into law.

Ambassador Haley gave her first press conference in her new role after experiencing a UN Security Council (UNSC) meeting first-hand. Describing what she had just witnessed as “very strange”:

“I am new around here, but I understand that that’s how the council has operated month after month for decades.”

And then she dropped the bombshell.

As you can imagine, her words were a much needed shock to the UN system. Headlines such as, “Haley’s Comet hits the UN” and “Nikki Haley puts UN on notice” were circulated in the press. And Israel breathed a sigh of relief; their number one ally in the world was back on their side.

The story of Nikki Haley doesn’t end there. While her first address was a much needed wakeup call, Ambassador Haley continues to raise important issues and bring about change at the UN. In her own words, here are a few ways the UN is changing.

“The power of your voice is an amazing thing,” she said, “Changing the culture of the UN is very important… we start to change the culture to what we should be talking about, and then we actually act on what we say.”

“I wear heels. It’s not for a fashion statement. It’s because if I see something wrong, we’re going to kick them every single time.”

“So how are we kicking? We’re kicking by, number one, putting everybody on notice, saying that if you have our back – we’re going to have the backs of our friends, but our friends need to have our back too. If you challenge us, be prepared for what you’re challenging us for, because we will respond.”

“The next thing we did was we said, the days of Israel-bashing are over. We have a lot of things to talk about. There are a lot of threats to peace and security. But you’re not going to take our number one democratic friend in the Middle East and beat up on them.”

“And I think what you’re seeing is they’re all backing up a little bit. The Israel-bashing is not as loud. They didn’t know exactly what I meant outside of giving the speech, so we showed them.”

“So then they tested us again. And a ridiculous report, the Falk Report, came out… [that] compares Israel to an apartheid state. So the first thing we do is we call the secretary general and say, this is absolutely ridiculous. You have to pull it. The secretary general immediately pulled the report. And then the director has now resigned.”

“For anyone that says you can’t get anything done at the UN; they need to know there’s a new sheriff in town.”