This following article was written by Dr. Yvette Alt Miller and published on Aish.com

The world was transfixed on the devastating images of flames and clouds of acrid smoke spewing from the burning roof of the Notre Dame Cathedral in central Paris. As Notre Dame burned, its charred ruin missing spire and roof, people around the globe stood with France feeling this loss of an irreplaceable religious and cultural icon.

Notre Dame dates from the 12th century and provides a snapshot of what life was like eight centuries ago. When it was built, the vast majority of the population was illiterate; many people lived in what today would seem like abject poverty. Many of the elaborate friezes, statues and stained glass windows served an educational function, illustrating Biblical and other religious stories and seeking to impart messages to the Christians of Medieval Paris. Surprisingly, some of the most prominent artwork on Notre Dame concerned Jews.

Above the cathedral’s main doorway is a frieze, or raised carving, of two Christian saints: Anne and Joachim, who are thought to be the grandparents of Jesus. Since these individuals were Jewish, the artist used actual local Jews as models. 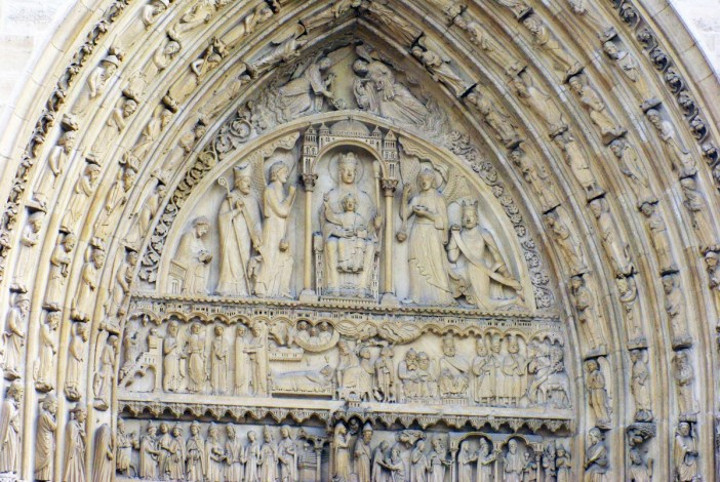 Jews were barely tolerated. King Philip II expelled Jews from France in 1182, but within a few years Jews began to trickle back into the country, settling in several cities and towns, including Paris. Their activities were severely restricted: the Lateran Council, convened by Pope Innocent III in 1215, banned Jews from all professions in Europe except for pawn broking and selling old clothes. In addition, Jews were forced to wear special ridiculous clothes that differentiated them from Christians.

We know what special garments the Jews in Paris wore because their likenesses have adorned Notre Dame Cathedral for 800 years. The Jewish wedding guests in the frieze are dressed in long robes and wearing tall pointy hats.

On the left, the frieze shows Anne and Joachim’s wedding and is a seemingly faithful reproduction of a Medieval French synagogue. The rabbi conducting the ceremony is wrapped in a tallit. Nearby is an ark containing the Torah, a pile of books and a Ner Tamid, the lamp that remains eternally lit in synagogues.

On the right, the frieze depicts Anne and Joachim bringing an offering to a synagogue; the artist even carved a Torah scroll resting on a bima. Nearby is the likeness of two Medieval Jews, deep in conversation in the synagogue.

At the time this frieze was being carved, Jews were relentlessly persecuted in Paris and elsewhere in Europe. In 1239, Pope Gregory I sent letters to church leaders, as well as to the kings of England, Spain and Portugal, enumerating dozens of charges against the Talmud. This led to calls to collect and destroy this Jewish holy work. Nowhere was this horrendous instruction carried out with as much zeal as in Paris. On March 3, 1240, church officials burst into synagogues throughout France. It was a Shabbat and synagogues were full. France’s helpless Jews watched as their holy volumes of the Talmud were confiscated and taken away.

French King Louis IX called for the Talmud to be put on trial. Four rabbis defended the Jewish holy books from a series of accusations; unsurprisingly, the Rabbis were found to have lost and the Talmud was condemned to be burned. On June 17, 1242, church officials brought 24 wagons piled high with volumes of the Talmud, about 10,000 books in all – all known copies of the Talmud then in existence in France – to Paris’ Place de Greve, next to Notre Dame. There, they were publicly burned.

Rabbi Meir of Rothenburg, known as the Maharam, witnessed the burning. He penned a haunting lamentation afterwards, recording that “My tears formed a river that reached to the Sinai desert and to the graves of Moshe and Aharon. Is there another Torah to replace the Torah which you have taken from us?”

Two prominent statues on the facade of Notre Dame captured the feelings of Christians and Jews at this time. On the right, one woman stands ragged defeated, her eyes are covered by a snake and her head is bowed. She holds a broken scepter and tablets of Jewish law are slipping from her grasp. Under her feet lies a crown trodden into the dust: she is “Synagoga”, representing the synagogue or Judaism in general.

The Catholic Church wanted those entering Notre Dame to believe that Judaism was finished, downcast and humiliated. On her left is a finely dressed woman standing upright, carrying a chalice and a staff with a cross at its peak, seemingly triumphant. She is known as Ecclesia, representing the victorious Catholic Church.

So important were these allegories of Christian dominance and Jewish humiliation that when the originals were destroyed during the French Revolution, they were recreated and replaced in the 1800s.

Above them is yet another depiction of Jews: the Gallery of Kings, featuring 28 kings of ancient Judah and Israel. These too were replaced after being smashed during the Revolution.

In 1306, King Philip III of France took a drastic step. He was short of funds and decided to seize the belongings and assets of the Jews in his kingdom. This was not an unprecedented step: Jews in Medieval Europe were, in the Latin phrase of the time, servi camerae mosrae, or servants of the chamber of the king. As property, they were the king’s to do with as he saw fit.

On July 22, 1306, the day after the Jewish somber holiday of Tisha B’Av, 100,000 Jews were arrested throughout France and forced into prison. There, they were told they were sentenced to exile; each Jew was permitted to bring only the clothes they were wearing and the very small sum of 12 sous each. In the ensuing months, King Philip III auctioned off the Jews’ property. His order of expulsion was reversed by his son King Louis X, but then reinstated in 1322. Only centuries later was it safe for Jews to once again live in France, as the territory of the expanding French kingdom grew to include areas where French Jews had fled and established new communities.

As French officials survey the wreckage of Notre Dame, it’s becoming clear that the front facade of the cathedral is largely intact. These irreplaceable artistic treasures depicting the history of Jews in France seem to be saved. They can teach us a great deal about Jewish history and fortitude in France and beyond.