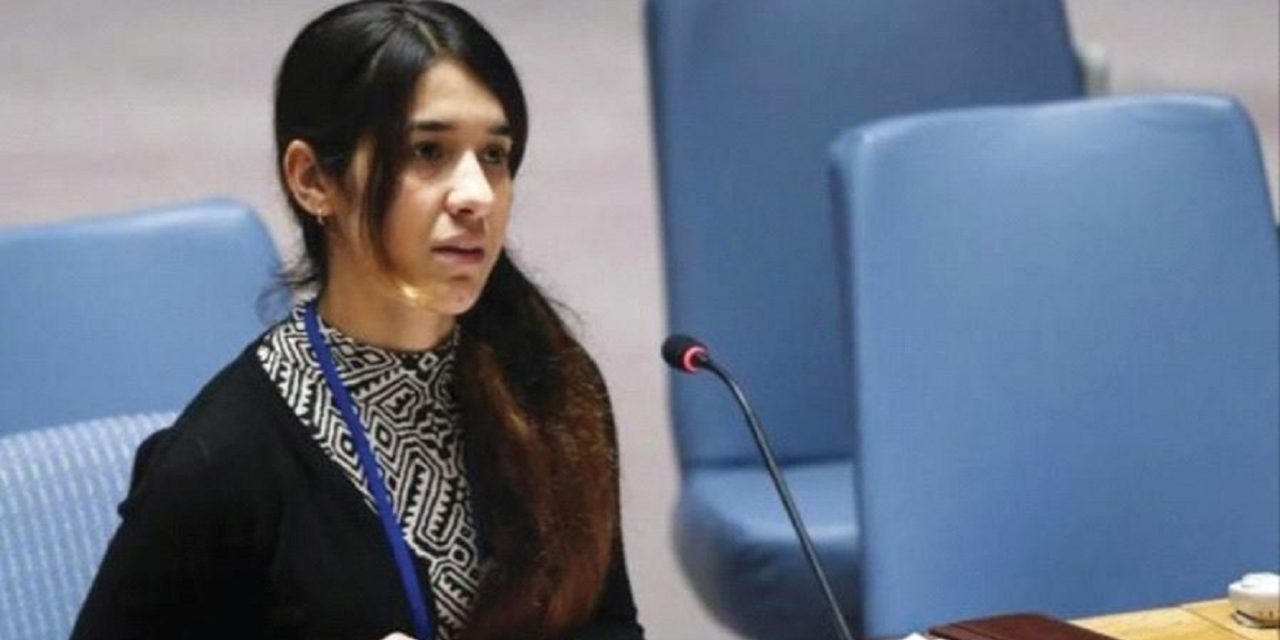 The Nobel Peace Prize has been awarded to a Yazidi ex-captive of ISIS who has previously compared her people’s own struggle with that of the Jewish during the Holocaust.

Nadia Murad was recognised for her work highlighting the use of sexual violence as a weapon of war, alongside Congolese doctor Denis Mukwege.

Ms Murad is one of an estimated 3,000 Yazidi girls and women who were victims of rape and other abuses by the IS army. She managed to escape after three months and chose to speak about her experiences on a global platform. At the age of 23, she was named the UN’s first goodwill ambassador for the dignity of survivors of human trafficking.

In 2017, she travelled to Israel to speak about her ordeal, where she addressed Beit Hatfutsot, the Museum of the Jewish People.

Addressing a packed lecture hall at the Museum of the Jewish People at Tel Aviv University on her last day in Israel, i24 News reported that Nadia drew strong parallels between the suffering of the Yazidi people and that of the Jewish people during the Holocaust.

“[The Jewish people’s story] is a unique story, and yet so much of it echoes my own community’s experiences. Like the Jews, the Yazidis have an ancient history thousands of years old. Despite recurring persecution, both our people have survived,” Nadia said, in remarks delivered through a translator.

“For three years, ISIS has stolen the authorship of the Yazidi story. But we will not let them write our future. My time in Israel has shown me that in the wake of oppression and genocide, a community can emerge stronger,” she said.

About Yad Vashem, Israel’s national memorial museum to the Holocaust, she said “the message is that there are many ways to be a hero. Like Jews, the Yazidi people are showing resistance by holding onto our identity and practising our traditions, and we need the Jewish people’s mentorship to rebuild our community. Thank you for giving us hope.”

The Yazidis are an ancient ethnoreligious minority whose beliefs incorporate elements of Christianity, Islam, and other traditions. In 2014, there were approximately one million Yazidis living around the world, with a 700,000 majority concentrated in the Mount Sinjar region of northwestern Iraq, close to the border with Syria.

As the Islamic State swept through Iraq and Syria, declaring swathes of the two countries as part of their so-called ‘Islamic caliphate’, the jihadists launched a targeted offensive on Sinjar on August 4, 2014 with the openly-stated goal of eliminating the Yazidis, whom they considered ‘kfir’ or ‘non-believers’, through killing, enslavement, and forced conversions.

“I remember hearing the rumours about cruel terrorists who hated my people and believed us to be devil worshipers,” Nadia recalls. “That day [August 4, 2014], and for several days after, ISIS killed our men and elderly women including six of my nine brothers and my mother.”

“[ISIS] trapped thousands who fled on Mount Sinjar without food or water. ISIS had planned in advance to enslave Yazidi women and children as part of strategy to destroy the Yazidi community. And so thousands of us were kidnapped and transported to warehouses and prisons,” she testifies. “But I escaped.”#

Nadia was re-settled in Germany under a special government project for vulnerable women and children. She testified before the UN Security Council in December 2015, and soon after, represented by prominent human rights lawyer Amal Clooney, began advocating to see ISIS militants brought to justice for crimes against the Yazidis.

In 2016, Nadia was appointed UNDOC Goodwill Ambassador for the Dignity of Survivors of Human Trafficking and was nominated for the Nobel Peace Prize. That same year, an independent commission officially declared that ISIS’s crimes against the Yazidis constituted genocide.

“When ISIS took over, the women were the first to suffer. Girls as young as nine years old were sold on slave markets and raped brutally,” Nadia says. “Now there are many girls in the refugee camps who are survivors of the genocide that are ready to give their evidence…To talk about what happened to them.”

It was through IsraAID’s work with Yazidi refugees in the now-evacuated Petra camp in Greece that the organization’s Co-Chief Executive Officer Yotam Polizer came to realize that Israel could play an important role in the Yazidi cause.

“Unlike the Syrian refugees, who saw our logo with the Star of David and were maybe confused, the Yazidis greeted us with huge smiles. They said for them it was a natural connection,” Polizer says.

In the camps, he adds, it became clear the Yazidis wanted “not our financial support, but our mentorship.”

While in Israel, Nadia visited the Yad Vashem Holocaust Memorial and Museum and the Museum of the History of the Jewish People, held meetings with Israeli lawmakers, and met with the President of Tel Aviv University together with Polizer in an effort to see Yazidi students brought to study in Israel.

“Like the Jews, the Yazidis have shown resilience in the face of oppression. Holding onto your identity can be a force of resistance. Every time we practice a traditional custom or stand up for one another we refuse to let our perpetrators be stronger than us,” Nadia says.