80 years since Dunkirk: A reminder of when a nation turned to God for help 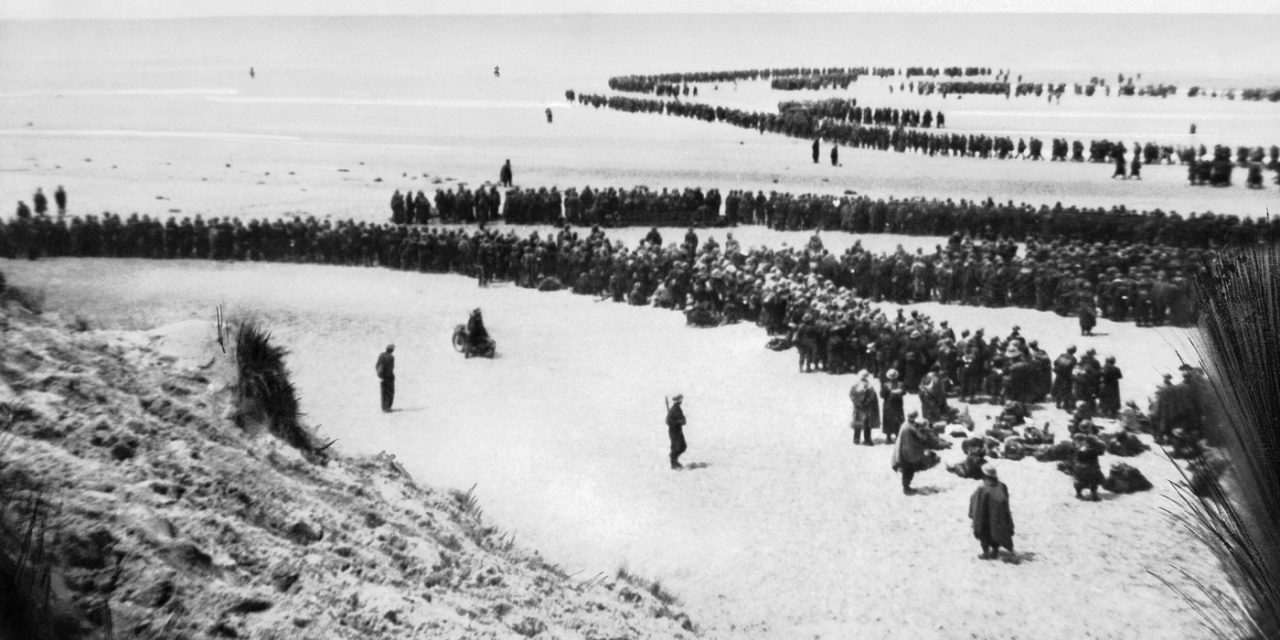 Between 26th May and 4th June 1940, more than 300,000 Allied soldiers from the beaches of Dunkirk, France were evacuated back to England.

Many may not realise that King George VI called for a National Day of Prayer as the situation developed, which preceded some extraordinary events that led to the deliverance of Allied troops followed by a National Day of Thanksgiving in recognition that “the prayers of the nation had been answered”.

In these dark days in which we are living in, will our nation turn to God for His Sovereign help and guidance? The following is an extract from a writing by the late David E Gardner who served in the Royal Navy during World War II. He explains how Britain did just that.

May 1940 was a time of grave crisis for the British Empire and for the whole civilised world.

On 10 May Hitler had launched his blitzkrieg against the Low Countries and France. By the end of the second week in May the French defences had been broken. German panzer forces, led by Rommel and his 7th Panzer Division, burst through, and with lightning speed began a rapid advance across France and Belgium. Very soon Rommel’s armoured pincer movement was threatening the British army with encirclement, and our forces were being obliged to withdraw.

Back at home Mr Churchill feared that it would be his hard lot to announce the greatest military disaster in our long history, whilst on 27 May the German High Command went so far as to boast that ‘The British army is encircled and our troops are proceeding to its annihilation.’

With the entire front collapsing rapidly, the decision was reached at home to evacuate our forces from the Continent. But the only port from which to evacuate the British Expeditionary Force was Dunkirk, and that was already being seriously threatened by the Germans. Taking stock of the predicament, Churchill said in The Second World War. ‘I thought—and some good judges agreed with me—that perhaps 20,000 or 30,000 men might be re-embarked. The whole root and core and brain of the British army… seemed about to perish upon the field, or to be led into ignominious and starving captivity.’ All therefore seemed about to be lost.

Britain had a godly Sovereign

But Britain had a godly Sovereign. Seeing this situation developing, His Majesty King George VI requested that Sunday, 26 May should be observed as a National Day of Prayer. In a stirring broadcast, he called the people of Britain and of the Empire to commit their cause to God. Together with members of the Cabinet, the King attended Westminster Abbey, whilst millions of his subjects in all parts of the Commonwealth and Empire flocked to the churches to join in prayer. Britain was given inspiring leadership in those days, and her people responded immediately when this kind of initiative was taken. The whole nation was at prayer on that Sunday. The scene outside Westminster Abbey was remarkable—photographs show long queues of people who could not even get in, the Abbey was so crowded! So much so, that the following morning the Daily Sketch exclaimed, ‘Nothing like it has ever happened before.’
In its hour of deep distress a heart-cry from both monarch and people alike was going up to God in prayer. And that cry did not go unanswered. For very soon, at least three miracles were seen to happen.

National Day of Prayer at the time of Dunkirk 1940

The first was that for some reason—which has never yet been fully explained—Hitler overruled his generals and halted the advance of his armoured columns at the very point when they could have proceeded to the British army’s annihilation. They were now only ten miles away! Later, Mr Churchill asserted in his memoirs that this was because Hitler undoubtedly believed ‘that his air superiority would be sufficient to prevent a large-scale evacuation by sea.’ That is very significant in terms of the second miracle.

A storm of unprecedented fury broke over Flanders on Tuesday, 28 May, (1940) grounding the German Luftwaffe squadrons and enabling the British army formations, now eight to twelve miles from Dunkirk, to move up on foot to the coast in the darkness of the storm and the violence of the rain, with scarcely any interruption from aircraft, which were unable to operate in such turbulent conditions. The Fuehrer had obviously not taken the weather into his reckoning, nor the One who controls the weather! And the third miracle?

Despite the storm in Flanders, a great calm—such as has rarely been experienced—settled over the English Channel during the days which followed, and its waters became as still as a mill pond.
It was this quite extraordinary calm which enabled a vast armada of little ships, big ships, warships, privately owned motor-cruisers from British rivers and estuaries – in fact, almost anything that would float – to ply back and forth in a desperate bid to rescue as many of our men as possible. 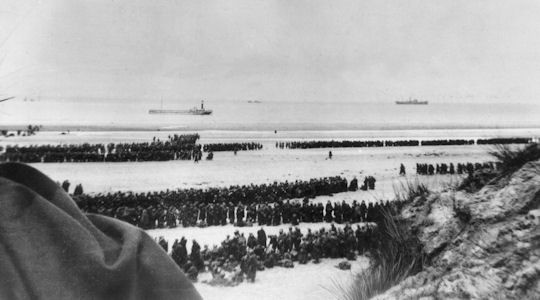 There were so many ships involved in the evacuation that this is the way in which Douglas Bader, the legless Spitfire fighter ace, who sped over with his squadrons from the fighter base at Martlesham, near Ipswich, to help cover the operation, described the scene in Fight for the Sky: “The sea from Dunkirk to Dover during these days of the evacuation looked like any coastal road in England on a bank holiday. It was solid with shipping. One felt one could walk across without getting one’s feet wet, or that’s what it looked like from the air. There were naval escort vessels, sailing dinghies, rowing boats, paddle-steamers, indeed every floating device known in this country. They were all taking British soldiers from Dunkirk back home. You could identify Dunkirk from the Thames estuary by the huge pall of black smoke rising straight up into a windless sky from the oil tanks which were ablaze just inside the harbour.”

Yet still, to a very large extent, the German air squadrons were unable to intervene. Certainly not in force, nor in the way Hitler had anticipated, for so many of these squadrons still remained grounded. So much so that General Haider, Chief of the German General Staff, three days after the High Command had so proudly boasted that the British Army was about to be annihilated, was obliged to record in his diary on 30 May that ‘Bad weather has grounded the Luftwaffe, and now we must stand by and watch countless thousands of the enemy getting away to England right under our noses.’

Even though some squadrons did get through, it seems that yet another miracle happened.

Many of the troops on the beaches were favoured with a strange immunity. When about 400 men were being machine-gunned and bombed, systematically, by about sixty enemy aircraft, one man who flung himself down with the rest reported that, after the strafing was over, he was amazed to find that there was not a single casualty.

Another man, a chaplain, was likewise machine-gunned and bombed as he lay on the beach. After what seemed an eternity, he realized he had not been hit, and rose to his feet to find that the sand all around where he had been lying was pitted with bullet holes, and that his figure was outlined on the ground.

Truly, amazing things were happening. There were signs on every hand that an intervening Power was at work. Officers and men alike had seen the hand of God, powerful to save, delivering them from the hands of a mighty foe who, humanly speaking, had them at its mercy.
And they were not slow to say so. Even Fleet Street has placed it on record that two miracles had made possible what had seemed impossible.

A Day of National Thanksgiving

So grateful was the nation for this mighty deliverance that Sunday, 9 June 1940 was appointed as a Day of National Thanksgiving. On the eve of that day, C. B. Mortlock stated in an article in The Daily Telegraph that ‘the prayers of the nation were answered’, and that ‘the God of hosts himself had supported the valiant men of the British Expeditionary Force.’

Two great wonders stand forth’, he said. On them have turned the fortune of our troops.
‘I have talked to officers and men who have got safely back to England, and all of them tell of these two phenomena. The first was the great storm which broke over Flanders on Tuesday, 28 May. The second was the great calm which settled on the English Channel during the days following.
‘Officers of high rank do not hesitate to put down the deliverance of the British Expeditionary Force to the fact of the nation being at prayer on Sunday, 26 May, two days before that great storm in Flanders and the calm that came over the Channel.’

The word ‘miracle’ was soon being heard on all sides, and a consciousness of a miraculous deliverance pervaded the camps in which the troops were being housed back in England.
Mr Churchill, when he chose 4 June as the occasion for making a statement to the House of Commons, spoke with a voice charged with emotion when he reported that, rather than 20,000 or 30,000 men being re-embarked, ‘335,000 men had been carried out of the jaws of death and shame to their native land. He referred to what had happened as ‘a miracle of deliverance’.

Psalm 124 sung in the churches

When the services of national thanksgiving were held in all churches on the following Sunday, 9 June, it was with great feeling that many a choir and congregation sang the words of Psalm 124, for they were seen to apply to that situation through which the nation had just passed:

‘If the Lord himself had not been on our side, now may Israel say: if the Lord himself had not been on our side, when men rose up against us; They would have swallowed us up quick: when they were so wrathfully displeased at us. Yea, the waters had drowned us: and the stream had gone over our soul. The deep waters of the proud would have gone over our soul. But praised be the Lord: Who has not given us over for a prey unto their teeth. Our soul is escaped even as a bird out of the snare of the fowler: the snare is broken, and we are delivered. Our help standeth in the name of the Lord: who hath made heaven and earth’

No other passage of Scripture could have more aptly described the nation’s experience on that day. The words seem to have been especially written for the occasion.

Extracted from a trilogy entitled ‘The Trumpet Sounds for Britain’ written by Rev. David E Gardner, who died just before the trilogy was republished. Whilst serving in the Royal Navy during WW2, an emergency in a submarine caused him to recognise the miraculous deliverance of God.