When the Media reports that an Israeli soldier was attacked, sometimes this is what it means

Israel is a tiny nation that is surrounded by enemies. Because of this, conscription (mandatory enrolment in the military) exists in Israel. This means that all Israeli citizens over the age of 18 are required to join the army, however, non-Druze Arab citizens of Israel are exempt, as well as others for religious, physical or psychological reasons.

The normal length of compulsory service is currently three years for men and two years for women. This means that while the Israeli army does have men and women who voluntarily enter the army as a career path, there are many who are there because they have to be, not because they want to be.

When the Media says, “Israeli soldier attacked”, our minds think of the latter – men and women who, like those serving in the British or American military, have chosen to become a soldier. In Israel this is not always the case. Israel’s army is not only made up of military men and women, but also of aspiring doctors, teachers, scientists, etc. They are regular young people, but they are serving and defending their country just the same. 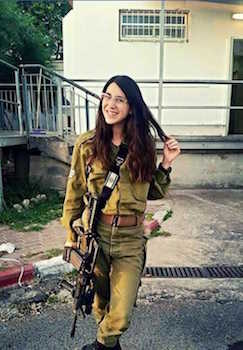 Unfortunately, when soldiers are attacked they are seen as lesser incidents than when civilians are attacked. In fact some people, including some pro-Palestinian activists, see soldiers as ‘fair game’, citing that Israeli soldiers are actually ‘occupation forces’ and are carrying out ‘Israel’s apartheid agenda’ and therefore are themselves responsible for this Palestinian uprising.

The above picture is 19-year-old Orel Azori Bat Limor. She is serving her mandatory military service and works on an Iron Dome battery (Israel’s missile defence system). She was waiting at a bus stop along with civilians on Sunday evening when a Palestinian terrorist ran his car into her. He then got out of his car and stabbed her multiple times.

The attacker then went on a stabbing spree, attacking a 14-year-old girl and stabbing her multiple times, along with two 20 and 45-year-old men. All victims are recovering, however Orel, the soldier, is in a critical condition. She had to be resuscitated at the scene and has undergone multiple surgeries to save her life.

On Monday, the terrorist, Ala Raed Zyud, had the audacity to claim it was a car accident and then was acting in ‘self defence’. He proclaimed his innocence with a smile on his face, while one of his victims lay in a hospital bed fighting for her life.

On Friday, a soldier in Hebron was stabbed by a terrorist disguised as a journalist.

Next time you read the headline, “Israeli soldier attacked”, remember that he or she could be just a regular teenager like Orel.