Less than a minute. That is all it took between the start of a rocket-attack warning siren and when a Grad rocket, loaded with 20kg of explosives, tore into the home of Miri Tamano.

In the middle of the night (Wednesday morning), Miri woke up, jumped out of bed and grabbed her three little boys who were fast asleep. They rushed to the bomb shelter, a reinforced room built into many Israeli houses, with Miri barely managing to shove her children in and close the heavy door when a massive explosion shook the house. They didn’t even have time to sit down before the blast.

“Mum, it hit our house,” one of her children said, starting to cry.

Shaken, but unharmed, the single mum and her sons, 8, 9 and 12, stayed huddled together in darkness.Hugging her little ones in the dark to calm them, she told them God was protecting them.

The missile blast utterly destroyed much of the family home, knocking over walls and devastating the second floor where the children’s bedrooms were located.

The young family were treated in hospital for anxiety, but were otherwise unhurt. The IDF credited Miri with saving their lives. 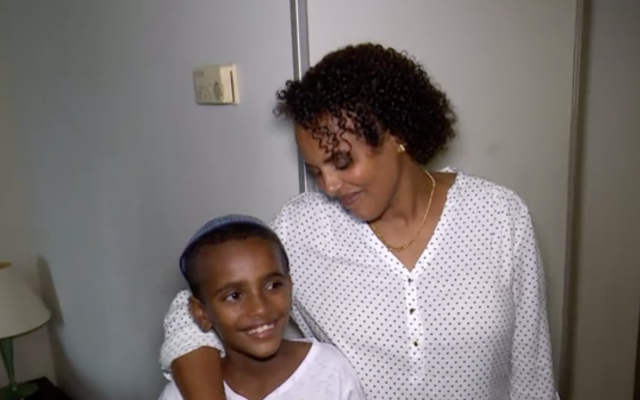 “I don’t feel like a heroine,” Miri told the media. “I think we are committed to protect. But I think that perhaps I was to be a messenger from God, to give a message, first of all to everyone listen to the instructions from the Home Front Command. If I hadn’t closed the door we all would have been hurt.”

The missile was the first to be fired at Beersheba since 2014 and Miri, who had been fast asleep, said when she first heard the rocket siren she thought she was dreaming.
“Then I understood that it isn’t my imagination, and that it isn’t a dream, this is real,” she said.

Miri said what happened had been “divine providence.”
“It was clearly a miracle,” she said from a Beersheba hotel room where the family has been living since their home was hit. “The whole of Israel saw that miracle.”

We give thanks to the Lord for the bravery of this young lady and for her testimony of God’s divine protection. It is horrifying that many families like Miri’s have to endure such a frightening ordeal. But this is the reality for many in southern Israel because of the actions by terror groups Hamas and Islamic Jihad. Let us continue to pray for Israelis living in the region and that Miri and her boys will continue to see the hand of the Lord upon their lives.

Last week the IDF positioned around 60 tanks near the border with Gaza, whilst violence from thousands of Palestinian rioters continues. Please also pray for the IDF and Israel’s leaders – for wisdom and discernment – and for their efforts in trying to protect the lives of thousands of people like Miri, who deserve to live safely and peacefully in the land of Israel.