Who believes in the Palestinian “Santa”? 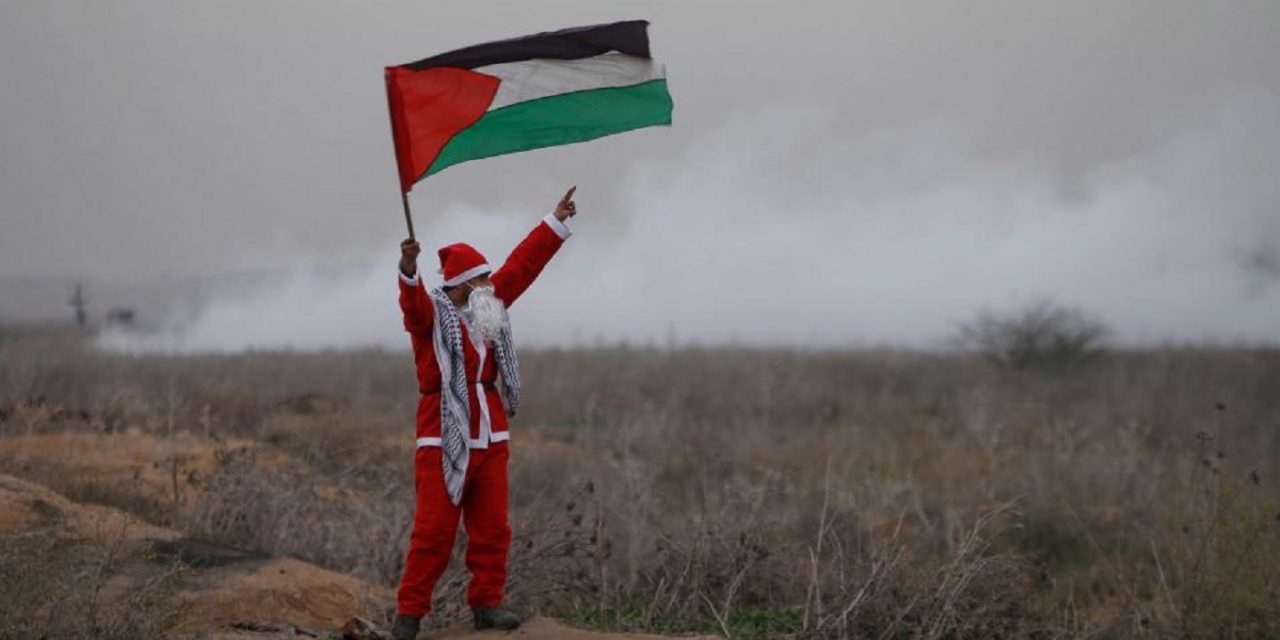 The Palestinian “Santa” has been spotted again this week, almost a year after his previous appearance.

For the past two years, Palestinian Santa and his helpers have taken issue with Israeli soldiers in Bethlehem. But this year he has turned his attention to President Trump’s moving of the embassy from Tel Aviv to Jerusalem. President Trump, who seemingly isn’t on his good list, was the subject of poster burning and was carried by the international media.

Santa got the attention he wanted. But moments later was seen throwing rocks at the IDF. Last year, Palestinian Santa was caught throwing tear gas.

The Palestinian “Santa” illustrates everything wrong with the anti-Israel protests. The protesters will use any and all opportunities to attack Israel and promote their false story that Israel has no claim to the Jewish holy sites. And the international media readily carries this narrative for the world to see.

This year their focus is Trump’s embassy move. Next month it will be something else. Because those that oppose Israel’s existence will never accept the right the Jewish people have to the land of Israel. 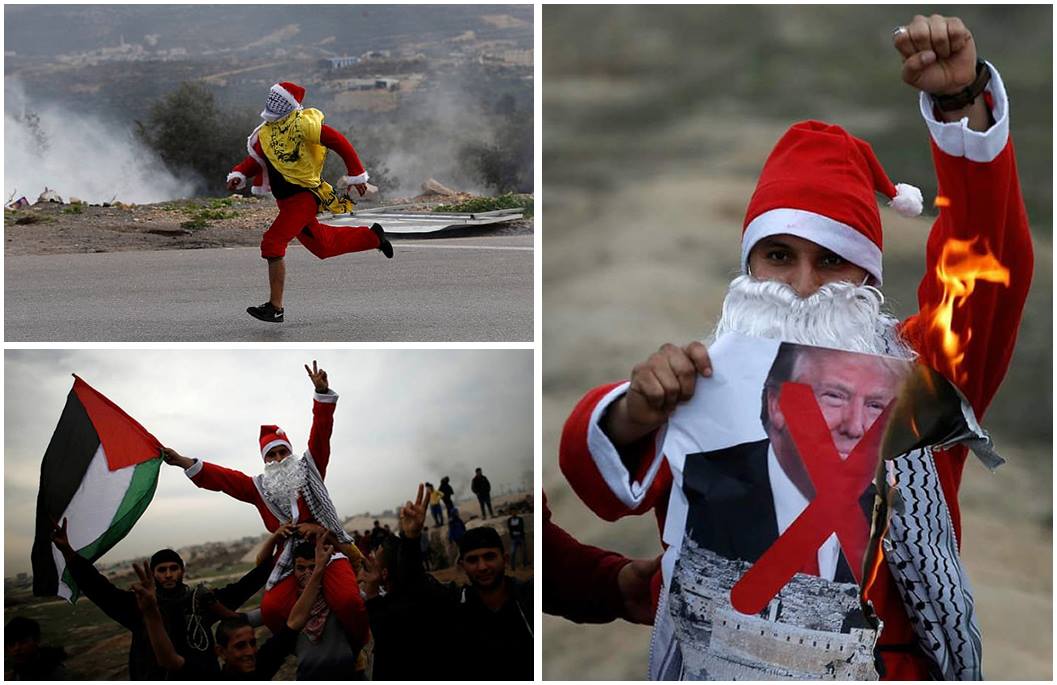 Christmas also seems to be increasingly used by Palestinians to support an anti-Israel narrative, often using the celebration that is meaningful to Christians as a political pawn.

For example, the Palestinian representative to the UN told the Genera Assembly on Friday: “The world is celebrating the birth of Christ over the next few days, but the lights will not be lit in the land of Christ – in Jerusalem, in Bethlehem and in Nazareth as a response to attempts to eliminate the Palestinian Arab, Christian and Islamic identity of the city and an affirmation of the unity of the Palestinian people around their cause.”

Today, Bethlehem remains the focus of the Christmas story, however now controlled by the Palestinian Authority (PA), anti-Christian persecution is rising. According to Open Doors, 1% of the Palestinian Territories population is Christian, with Islamic extremism being the main source of the decline and Muslim-background converts facing the most severe persecution.

“While some contribute the decline to a range of factors, others are now openly speaking of Muslim intimidation towards the Christian community, including land theft, discrimination in public sector employment, abuse, and economic hardships.”

“While Palestinians are being portrayed as victims, even when they commit acts of violence or terrorism, little attention is given to the Christian community who has refused to engage in such acts. It seems that terrorism is only rewarded by the media, not kindness and forgiveness.”

Pressure upon the Christian community is felt significantly during the time when many Christians celebrate Christmas. Let’s take celebrations in 2015 as an example:

On Christmas Day itself, Muslim Palestinians hurled stones at the car of Latin Patriarch of Jerusalem, Fouad Twal, as he travelled to Bethlehem. Even before this attack, Palestinian Muslims set fire to a Christmas tree in the village of Al-Zababdeh. Further to this, Palestinian protesters were disguising themselves in Santa Claus costumes and throwing stones at Israeli soldiers while reportedly shouting “Allahu Akbar”. The Western media, however, failed to associate these actions in any way to Islamic radicalism. Christians across the Middle East are being persecuted to great extremes, yet when it comes to the Palestinian Territories the media continues to follow the narrative that Israel is solely to blame for the predicament of Christians living there.

Yet, for much of the international media obsessed with denouncing America’s recognition of Jerusalem, the Palestinian Santa is much more believable than reality.

See also: Jesus was NOT a Palestinian