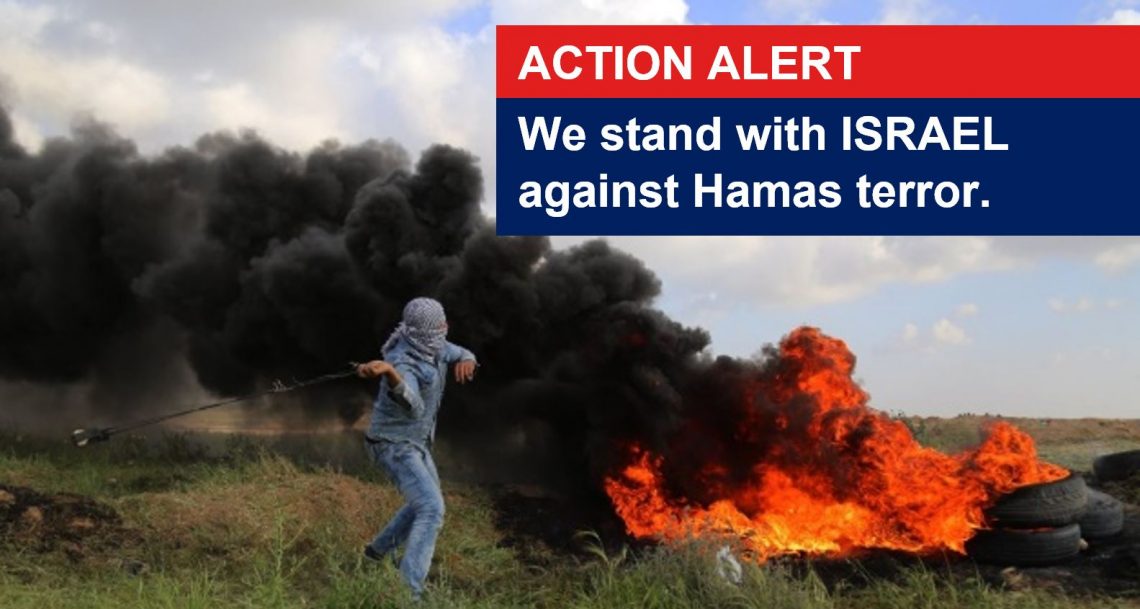 Please join us in emailing Foreign Secretary Boris Johnson (copied to your MP) urging the Government tocondemn the violent actions by Hamas and in full support of Israel’s right to defend its border and its people.

Over the past few days, terror group Hamas, which controls the Gaza Strip, ordered tens of thousands of Palestinians to march towards the Israel-Gaza border for the explicit purpose of causing chaos and violence against the Jewish people.

Hamas told the West their “protests were peaceful”, yet they told their own followers that they will not stop until they “remove this transient border [between the Gaza Strip and Israel].”

Sixteen rioters were killed following violence along the Gaza security fence on Good Friday. Ten have been identified as members of Palestinian terrorist groups. This is not a peaceful protest – it is an act of aggression against Israel. Yet when violence leads to civilian casualties, they choreograph the international media and their supporters at the UN to criticise Israel. Already the world’s media is ignoring the Hamas terror that initiated this conflict and are blaming Israel for the violence.

Hamas has also been using women and innocent children as human shields. In one instance, a 7-year-old girl crossed the border into Israel. The IDF took the appropriate step of showing love and care to the little girl by ensuring her safety and returning her to her family. Hamas has tried rockets and tunnels and failed – now (not for the first time) they are resorting to the use of people. They DO NOT care about the value of human life.

Former Hamas leader Khaled Mashaal said during a visit to Turkey yesterday:
“Our people are capable of defending themselves,” he said. “In the past, the enemy was used to rockets being launched from the Gaza Strip. But this time Gaza surprised [Israel] with something new, and there’s more in stock.”

The current violence is the beginning of a six week campaign. Attempts to breach Israel’s border look set to continue, but it is also likely that violence will spread to other parts of Israel and could even spark wider conflict regionally.