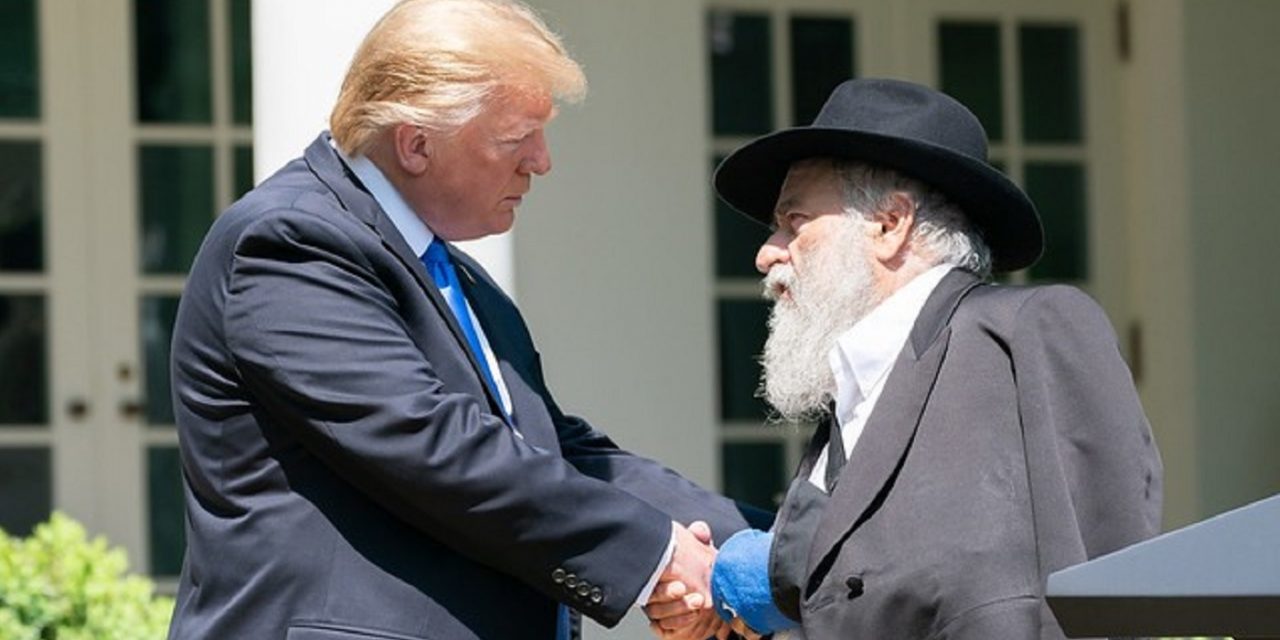 Five days after being wounded in the anti-Semitic shooting attack in San Diego, Rabbi Yisroel Goldstein of Chabad of Poway stood side-by-side with President Trump thanking him for his support.

The rabbi, who lost two fingers in the shooting, was invited by Trump to the National Day of Prayer held at the White House on Thursday.

“I should have been dead by now,” Rabbi Goldstein said. “I was in the line of fire, bullets flying all the way.”

President Trump said, “We will fight with all our strength and everything that we have in our bodies to defeat anti-Semitism. As we unite on this day of prayer, we renew our resolve to protect communities of faith and ensure that all people and all of our people can live, pray and worship in peace.”

Rabbi Yisroel Goldstein: Mr. President Donald J. Trump, when you called me, I was at home weeping. You were the first person who began my healing. You help people in their worst of times, and I'm so grateful for that." #NationalPrayerEvent #NationalDayOfPrayer #VarneyCo

The rabbi, who was delivering a sermon on the final day of Passover at the time of the shooting, said that we can’t control situations. However, he added, we can control our reactions and respond to darkness with light.

“My fingers got blown off, but I did not stop. My life has changed forever. But it changed so I can make change,” Rabbi Goldstein said, calling for a moment of silence in public schools as a first step.

“Many have asked me, ‘Where do we go from here? How do we prevent this? My response is what my Rebbe told me when President Ronald Reagan was shot, that we need to go back to the basics and introduce a moment of silence in all public schools,” he suggested.

“Mr. President, when you called me, I was at home weeping,” he continued. “You were the first person who began my healing. You heal people in the worst of times, and I’m so grateful for that.”

Lori Gilbert-Kaye, a 60-year-old mother, was killed in the shooting as she threw herself in front of Rabbi Goldstein taking the bullet.

Two other people were injured alongside the rabbi, including Noya Dahan, 8, a girl originally from Sderot in Israel who was hit by shrapnel in the face and leg, and her uncle Almog Peretz, 31, who was shot in the leg as he ushered children in a playroom to safety.