Palestinian man stabbed an Israeli Sunday afternoon at a bus stop on the side of a West Bank highway near the settlement of Ariel.

The incident took place on Route 5, just east of Ariel, in the northern West Bank.

The 25-year-old victim was moderately hurt with stab wounds to his upper body. He was taken to Beilinson Hospital in Petah Tikvah for treatment.

According to Channel 2, the suspect approached the bus stop wearing a Jewish skullcap and attacked the victim.

The suspect initially fled the scene, prompting IDF troops to block the entrances to several nearby Palestinian villages in order to help search for the perpetrator of the attack.

After a manhunt by police and the IDF, Israeli soldiers apprehended a suspect in the nearby village of Marda.

The victim, a middle-aged man, sustained moderate injuries to his upper body and was taken to Hadassah Ein Kerem hospital, according to initial reports.

He was stabbed after exiting his car when it was pelted with stones, the Israeli army said.

“Initial reports suggest that moments before the attack the Israeli exited his car due to rocks hurled at the road,” the army said in a statement. “The Palestinian then attacked the Israeli, stabbing him in his chest.”

Police are searching for the attacker.

The Palestinian teen was posing as a Krembo seller (Krembo are marshmallows and chocolate snacks, similar to a Tunnock’s Tea Cake). The boy then threw down the box and, armed with a knife, ran through the lines of cars towards security guards.

He was shot and killed on approach. A video of the incident has been released showing the boy running with the knife towards them before being neutralised.

Parents and their 3 young children injured from Molotov cocktail hurled at vehicle near Jerusalem.

Two Israeli parents and their three young children were wounded Friday in a firebombing attack on their car near the settlement of Beit El, in the West Bank north of Jerusalem.

The five were treated at the scene by Magen David Adom medics and evacuated to a Jerusalem hospital for further treatment. 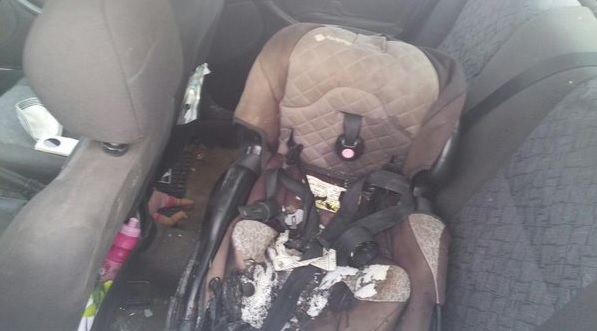 Picture of the burned out car seat of a 4-year-old girl. The car was hit by a molotov cocktail (fire bomb)

An Israeli soldier was stabbed and lightly to moderately wounded Friday morning in the Gush Etzion settlement bloc, south of Jerusalem.

According to the Hebrew-language Maariv website, the victim, a 26-year-old man, was stabbed in the shoulder. The attacker was shot and wounded by the soldier.

The soldier was conscious after the attack and received medical treatment at the scene before being evacuated to Shaare Zedek hospital in Jerusalem, the Magen David Adom rescue services said.

According to an initial investigation, the soldier was guarding an olive harvest near the settlement of Neve Michael — near the checkpoint in the area of Tzomet Gvaot in the West Bank — when he was attacked, Channel 2 reported. The soldier shot his assailant in the shoulder. When the attacker tried to flee, other forces in the area shot him in the knee in order to stop him.

Israel’s Walla news website said the attacker was a 16-year-old resident from the village of Surif, in the Hebron region of the West Bank.