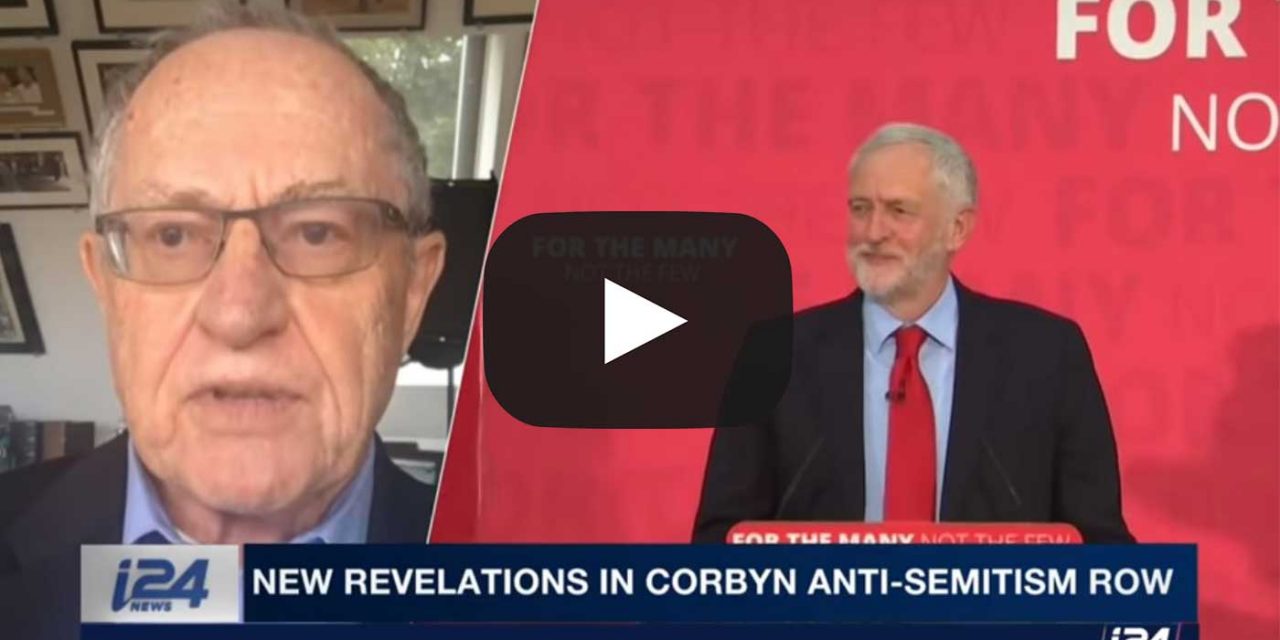 Harvard professor and lawyer, Alan Dershowitz said: “There is no doubt in my mind that Jeremy Corbyn is an anti-Semite”.

He also said Corbyn was an “existential threat” to the future of Britain and argued that Corbyn was not pro-Palestinian as he does not speak out against those who really oppress the Palestinian people such as Hamas.

Dershowitz was being interviewed on Israel’s i24News where he was asked if Corbyn’s criticism of Israel was tantamount to anti-Semitism, Dershowitz explained the Labour leader’s double standards.

“Well, Corbyn doesn’t just criticize Israel. He singles out the nation-state of the Jewish people for criticism,” he said.

An example he gave was how Corbyn has called Israeli politician Tzipi Livney a “war criminal” whilst on the other hand praising “Chavez and Castro… who have murdered tens-of-thousands of people.”

Dershowitz made the bold statement that Corbyn is, in fact, someone who incites terrorism.

“Corbyn is an inciter of terrorism,” Dershowitz said. “When you go and visit and praise the terrorists who murdered Israeli athletes and coaches, you’re complicit in encouraging and glorifying terrorism.”

Dershowitz also argued that Corbyn’s anti-violence stance was a facade.

“If he was a man who across the board condemned violence or condemned war, that one be one thing. But he only condemns it when its engaged in by the nation-state of the Jewish people and he gives a complete pass to much, much, much worse violence,” Dershowitz said.

Asked if his words were too strong, Dershowitz went on to explain that Corbyn is someone who “would welcome with open arms war criminals from over the world if they were only people of the left who supported him.”

“So yes, the charge of anti-Semitism is very strong and it transcends his anti-Zionism and his anti-Israel attitudes,” he said.

Corbyn does not care for the Palestinian people

Asked about Corbyn’s pro-Palestinian stance, Dershowitz responded, “He doesn’t care about the Palestinians at all.”

“He couldn’t care less about the Palestinian people,” Dershowitz charged. “The notion that he’s pro-Palestinian is nonsense.”

Corbyn threatens the future of Britain

Dershowitz went on to say Corbyn, “does not stand for the good people of Great Britain”.

“Many people in Great Britain are going to vote for him not because of his anti-Semitism, but despite his anti-Semitism. And that’s been true of other anti-Semites throughout history. But he is an anti-Semite, let there be no mistake about it,” he said.

“It’s a really serious problem and everybody should be concerned about this bigot who tries to become the Prime Minister of a great country,” he said.

You can criticise Israel without being anti-Semitic

When asked if there was something unique about Israel’s case where someone is against Israel’s policies and yet are labelled as being anti-Semitic, Dershowitz replied, “No, that’s not true. I’m against many of Israel’s politics.”

“If people who are opposed to Israel’s policies were regarded as anti-Semitic, the greatest concentration of anti-Semitic thoughts in the world would be in Tel Aviv.”

He also noted how Haaretz, an Israeli newspaper which is strongly opposed to the policies of the Netanyahu government, would also be labelled as anti-Semitic if this were true.

“No legitimate person calls criticism of Israeli politics anti-Semitic. But that’s not what Corbyn’s about. Corbyn’s about the existence of the nation state of the Jewish people. He prefers to see a world without Israel. He only singles out Israelis as war criminals, not real war criminals.”

The interviewer interrupts him at this point and tries to argue that if someone criticises Trump it doesn’t make them anti-American, so would someone being anti-Netanyahu be automatically labelled anti-Israel.

He explained, however, that it is unique characteristics that make criticism of Israel anti-Semitic such as “delegitimising the nation station of the Jewish people, applying a double standard to them, being concerned only for with Israel’s imperfections rather than the much greater imperfections of other countries in the world” is what “qualifies as anti-Semitism.”

He concludes that based on those qualifications he sees Corbyn as an anti-Semite.