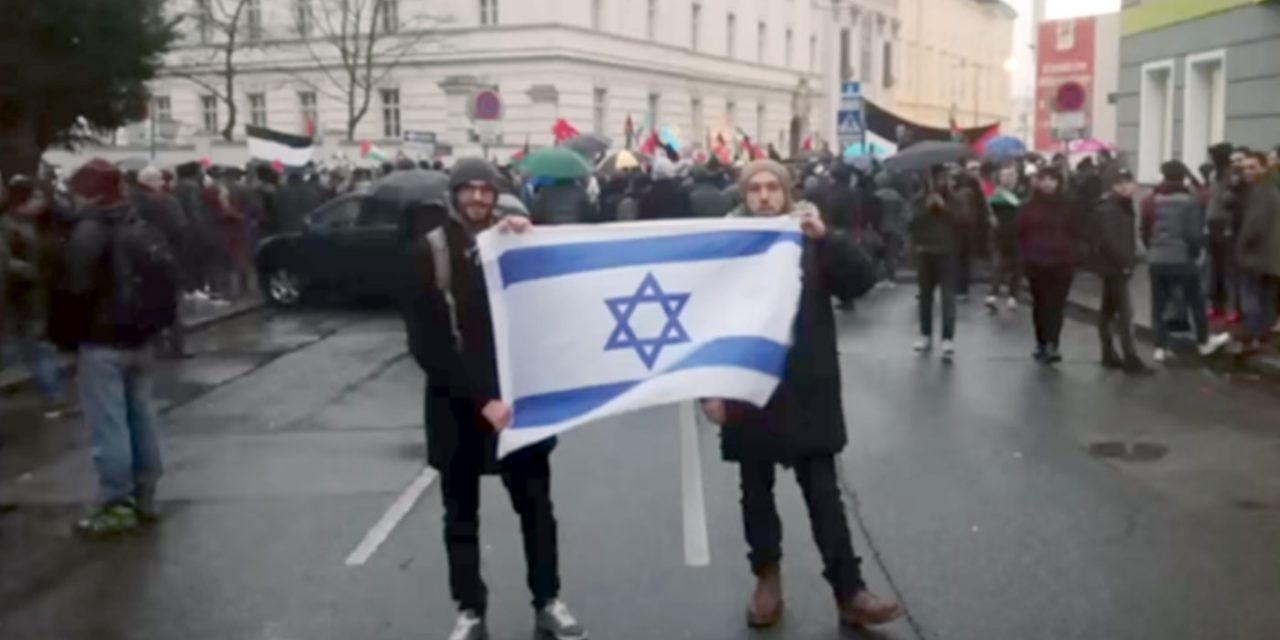 Three Jewish students have been fined €100 each or must serve two days in prison. Their crime? They held an Israel near an anti-Israel protest.

In a shocking display of double standards by the Austrian police, no action was taken against those in the anti-Israel protest who shouted “Death to Jews”, or those flew pro-terrorist flags for Hezbollah and Hamas and nothing was done against the people who physically attacked the Jewish students in front of the police.

The video below in mainly in Hebrew, however you can clearly see pro-Hamas flags and Hezbollah flags being flown, and the students presented no threat to anyone.

“Three Jewish students received a 100 euro fine from Vienna police after waving an Israeli flag at a pro-Palestinian demonstration in which ‘Death to the Jews’ was shouted,” Antonia Yamin, Kan News correspondent stationed in Berlin, tweeted on Tuesday. “The reason for the fine: ‘You behaved insensibly, violated public order and created a provocation.’”

According to Vice.com, “following the decision of US President Donald Trump to transfer the US embassy in Israel from Tel Aviv to the capital Jerusalem (we wish), hundreds of people demonstrated against Trump’s statement at the US Embassy in Vienna on December 8. Anti-Semitic slogans could be heard there, again and again.”

In protest, a group of three people—one over the minimum required to make a group—was displaying an Israeli flag, Vice continued, and reported that they were “attacked by pro-Palestinian protesters.”

“One month later, the three Viennese received a fine from the Vienna police – for disturbing the public order, they have to pay 100 euros or go to jail for two days.”

Matthias F., one of the individuals fined by the police, told Vice: “My mother is Israeli, her family are refugees from Iraq and Libya. An Arabic-speaking friend from Israel translated for us some of the slogans [the anti-Israel protesters shouted], such as the Arab battle cry for massacring Jews, ‘Khaybar, Khaybar, ya Yahud, Jaish Muhammad, sa Yahud,’ and the Persian slogan, ‘Marg bar Israil’ (Death of Israel). Other chants included ‘Intifada’ and ‘Israel Child Murderers.’”

“We were shocked by these slogans and did not want to leave them unanswered,” Matthias F. explained, adding, “Anti-Semitism and hatred of Israel must not be tolerated.”