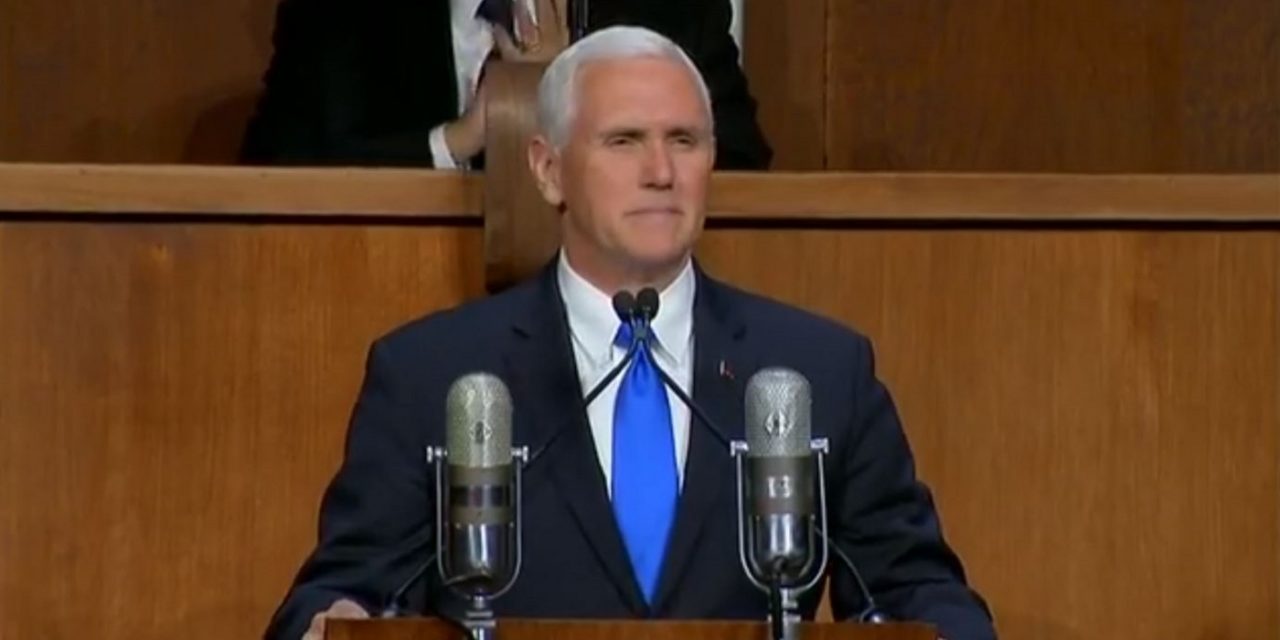 Vice President Mike Pence addressed an event in New York yesterday commemorating the 70th anniversary of the United Nations vote recognising the right of the Jewish people to a homeland in the Holy Land.  The vote occurred on 29 November, 1947.

Thirty-three nations voted for “the partition of Palestine” into Jewish and Arab states, while 13 nations voted no and 10 abstained.  Within days, fighting erupted as all the Arab nations in the Middle East rejected the idea of a Jewish state.  Thus, Israel’s War of Independence began.

During his remarks, Vice President Pence reiterated America’s strong support for Israel, as well as President Trump’s intention to move the American Embassy from Tel Aviv to Jerusalem.  Below are some excerpts of the vice president’s address.

“Now to be clear: Israel needed no resolution to exist, for Israel’s right to exist is self-evident and timeless.  Nor did that resolution create the State of Israel. For Israel was born of the sweat and the sacrifice of the Jewish pioneers who risked everything to reclaim their beloved lands.”

On America’s support for Israel:

“The United States of America was proud to support Resolution 181. We were proud to be the first nation in the world to recognize Israel’s independence soon after. . .  And under President Donald Trump, let me assure you of this, if the world knows nothing else, the world will know this: America stands with Israel.”

On the U.S. Embassy:

“And beyond the walls of the United Nations, our President is working tirelessly to strengthen the historic friendship between the United States and Israel. . .  as we speak, President Donald Trump is actively considering when and how to move the American embassy in Israel from Tel Aviv to Jerusalem.”

“And our two nations stand together to confront any who dare to threaten us, most especially the menace of radical Islamic terror.  It does not matter what name it takes — Hezbollah, Hamas, al Qaeda, or any other — you can be assured that we will defeat the forces of terror. . .

“As we speak, our administration is working closely with leaders in Congress to craft legislation that will overcome the Iran nuclear deal’s most glaring failures. And while this process is still underway, today I can assure you, under President Trump, the United States of America will not allow Iran to develop a nuclear weapon.”

“Israel is an eternal testament to the unwavering fortitude of her people, to the unfathomable power of human freedom, and to the unending grace of God. And so today, we still trust in that promise. A promise in words heard millennia ago that I believe are true for her people and true for our people today as much as they were when they were first recorded, ‘For I know the plans I have for you,’ He spoke, ‘plans to prosper you, and not to harm you, plans to give you a hope, and a future.’ . . .

“And with the friendship and courage of our citizens, with the commitment of our leaders, and with the guidance of Providence, I say with confidence, the United States and Israel will meet that bright future together.”