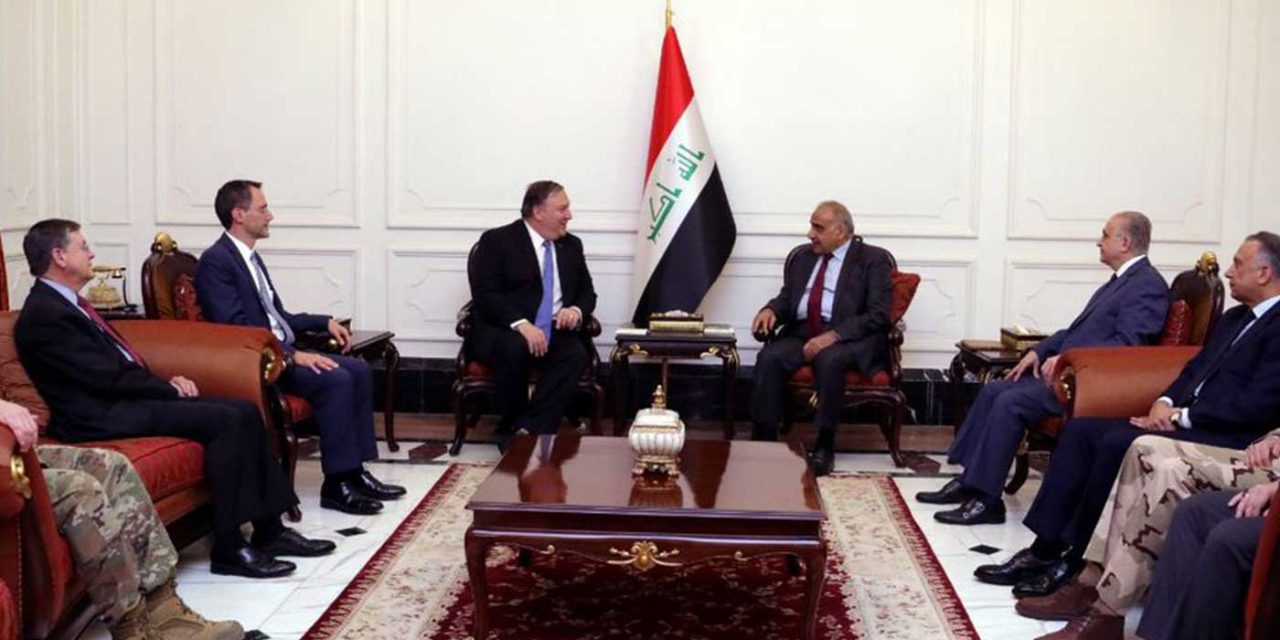 The US on Wednesday announced the drastic step of evacuating its embassy and consulate staff in Iraq as tensions rise with neighbouring Iran.

A State Department advisory announcing the move, which left only emergency staff in the country, and placed the embassy in partial closure, warned of numerous terrorist and insurgent groups active in Iraq including “anti-US sectarian militias” who could “threaten US citizens and Western companies throughout Iraq.”

@StateDept has ordered the departure of non-emergency USG employees from Iraq, both at the Embassy in Baghdad and Consulate in Erbil. Additional information on this alert can be found on the U.S. Embassy website at U.S. Citizen Services. https://t.co/iX96dAkyhT

Just last week US Secretary of State Mike Pompeo was in Baghdad (pictured above) in a visit to bolster ties with Iraq and during that time said Iran’s forces are “escalating their activity” and said threats from the Iranian regime were “very specific”.

Iran is ruled by Shiite clerics, such as Ayatollah Khamenei, who has a strong influence in Iraq, especially in the country’s Shiite-majority south.

Tensions have been rising in the Middle East, in particular between the US and Iran, after Iran threatened to break the conditions of the Iran Deal (the JCPOA), saying it will increase its uranium enrichment if its demands were not met.

The US is currently applying additional sanctions on Iran which are hurting its struggling economy. However, the White House will consider taking additional action beyond sanctions if needed.

In response to these increasing threats, the US bolstered its military capabilities in the region, moving an aircraft carrier strike group into the Persian Gulf. The Pentagon also said it was sending several nuclear-capable B-52s to the region in response to Iran’s plots to attack US forces.

National Security Advisor John Bolton said this move was “a clear and unmistakable message to the Iranian regime that any attack on United States interests or on those of our allies will be met with unrelenting force.”

When asked by a reporter if the Pentagon would strike Iran’s nuclear facilities if they go above 20% purity enrichment 60 days from now, an unnamed senior administration official said, “The President has been very clear that when the security of the American people is threatened, all options are on the table.”

The official was clear, however, that the US does not seek a conflict with Iran, but that the President is “certainly not going to constrain his options if the Iranians take an action he thought was unacceptable.”

There were rumours that 120,000 US troops were ready to be deployed into the region earlier in the week. This is a number similar to the US invasion of Iraq. However, President Trump shot down this rumour as “fake news”.

“Now would I do that? Absolutely. But we have not planned for that,” he told reporters at the White House on Tuesday. “Hopefully, we’re not going to have to plan for that, and if we did that, we’d send a hell of a lot more troops than that.”