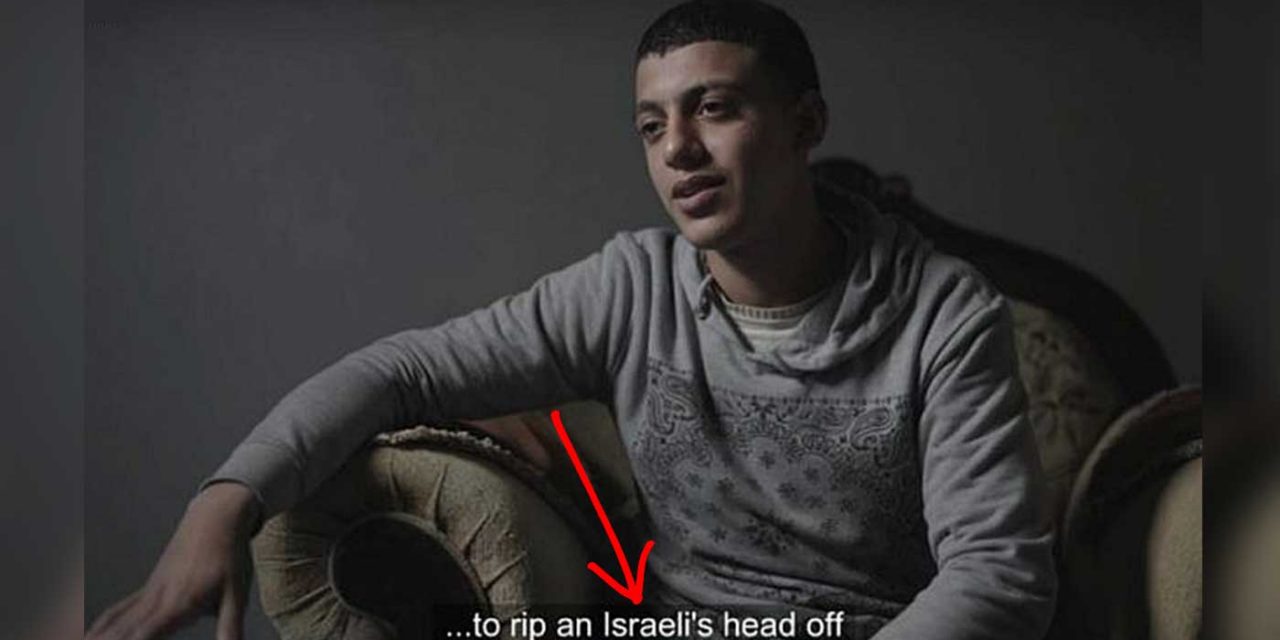 The BBC’s latest documentary shamefully mistranslated the word “Yahud”, or “Jew” in Arabic, to instead read “Israeli”. A subtle change that masks the anti-Semitic hatred that the Palestinian leadership in Hamas has instilled in its population.

The Palestinian territories were found to be the most staggeringly anti-Semitic region in the world with a 93% overall index score in the most recent ADL polling. Among specific age groups, 92% of those between the ages of 18-49 were shown to have anti-Jewish views, and the figure jumped to 98% among those 50 and older.

It is unsurprising then that some of those who hate Israel will express themselves with hatred against Jews and see Jews, not Israel, as the enemy.

Anti-Semitic hatred of the Jewish people is fueling the conflict between Israel and the Palestinians. The Palestinian terrorist organisations want to remove the Jews from the land and destroy Israel. There can never be peace until the Palestinians reject their hatred.

Sadly, the media, including the BBC, refuse to acknowledge this basic view. They instead try to paint the Palestinians as peaceful activists who are only against the Israeli government. This is not true, and changing subtitles shows how certain media outlets are willing to distort the truth to change how their audience perceives the Palestinians.

The BBC has been accused of “playing down” antisemitism after the Arabic word for Jew was mistranslated to Israeli in the English subtitles for a documentary on Gaza border clashes.

The film ‘One Day in Gaza’, which focused on last year’s deadly mass protests against the opening of a new US embassy to Israel in Jerusalem, aired yesterday evening on BBC Two.

The 60-minute documentary, which contained exclusive videos from Hamas and the IDF, marked a year since one of the deadliest days of violence in the Gaza Strip.

Among the Palestinian protesters interviewed, 24-year-old Bader Saleh said in Arabic: “I’m not one for fighting or burning tyres, but when I went I was convinced by it.

“The revolutionary songs, they excite you, they encourage you to rip a Jew’s head off.”

But the English translation of Saleh’s remarks offered by the BBC refers to an “Israeli”, not a “Jew”.

Later, Saleh also said: “I was really close to the fence and I could see this Jewish soldier with his gun. I could even see the gun he was carrying.”

Similarly, protester Hanan Abu Jamee’a is quoted as saying: “Some of us distracted the Israelis with stones and molotov cocktails.”

But she in fact employed the Arabic word for Jews to refer to IDF soldiers.

In another instance, Reem Abu Ermana, whose 14-year-old daughter Wissal was shot in the head during the clashes, said: “After a while [Wissal] became the sniper’s enemy.

“They would pull the car tyres with a wire to act as a cover for the young people, so the smoke would protect them from the Jews.”

But according to the subtitles, she referred to IDF soldiers as “Israelis”.