A gathering in London of Holocaust deniers and Nazi sympathizers has drawn calls for police investigation, the British paper the Daily Mail reported Saturday.

Held at the Orient Suite in London’s four-star Grosvenor Hotel, the gathering last Saturday reportedly drew a diverse mix of speakers from the UK, Spain, Canada and the US.

“The material from this white supremacist group makes ugly reading,” Jonathan Arkush, vice-president of the Board of Deputies of British Jews, was quoted as saying. “On the face of it, their proceedings should be investigated to ascertain whether criminal offenses have been committed, including incitement to racial hatred.”

The newspaper sent an undercover team into the event, where it counted 113 participants in all, and the resulting report detailed incendiary anti-Semitic statements and open expressions of support for Nazism and racism.

“As long as the power of the Jewish lobby remains entrenched, there will be no end to the systematic Jewish distortion of history,” the paper quoted Mark Weber, the California-based head of the Holocaust-denial organization Institute for Historical Review, as saying at the gathering. “No task is more important or pressing than to identify, counter and break this power,” Weber added.

Among the incidents witnessed by the Mail reporters, the gathering’s participants “sniggered at the mention of ‘ashes rising from the death camps’ crematoria; applauded as they were urged to ‘identify, counter and break… Jewish-Zionist domination’; laughed at the Charlie Hebdo massacre, and as an African leader at the Paris memorial ceremony was described as ‘some Negro’; cheered at the mention of a brigade of Spanish Fascists who fought for the Nazis; heard gay parents branded ‘monster families’ and mixed race children described as ‘blackos.’”

The headline speaker at the event was the Spanish Nazi sympathizer Pedro Varela, 57. Former senior members of the far-right British National Party and National Front were also in attendance.

According to the report, participants in the gathering were not told its exact location for security reasons. They met at the nearby Victoria railway station and were escorted “in ones and twos” to the Grosvenor Hotel by “former private school art teacher Michael Woodbridge, 69, who conspicuously carried a book by British Union of Fascists leader Oswald Mosley” and wore a lapel pin with the Union’s logo.

Another sign of the event’s security precautions came in the conference room’s booking. The Orient Suite where the gathering took place was reserved under the pseudonym “Carlyle Club,” the report said.

The Grosvenor Hotel told the paper that “the room booking was made online and hotel staff were unaware of the nature of the meeting.”

The sense of siege was palpable, the report suggested. As Varela told the meeting, “We have to measure our words… I was asking [another participant], ‘Can I say everything I believe in this forum?’ He told me, ‘as long as you do that in an academical [sic] way, in a serious way, it’s possible.’”

Even so, Varela’s speech “referred to mixed-race children as ‘blackos’ and described gay parents as ‘making a monster family,’” the report said.

Turning to Jews, Varela reportedly said, “They say Jews have the gold in the world and the power in the press and they are going to rule the world… So, do we have to be realistic, be similar to the officer of the general staff of an army… What are the enemy’s faults? We should also be smart and clever, as are the children of darkness… Sometimes we are not that smart.”

Contacted at home by the Mail, Woodbridge said, “It is fairly assumed by people at the meeting that the Holocaust is an exaggeration to put it mildly. It has been used as a propaganda weapon to justify the war against Germany.”

In his own speech, titled “The Challenge of Jewish-Zionist Power,” Weber said that “the Jewish connection covers all areas and reaches every level. Most Americans may not even sense this gigantic effort, but there is scarcely a Jew who is not touched by its tentacles…. Today, we are engaged in a great global struggle which pits a self-assured and diabolical power which feels ordained to rule over others on the one side, and all other nations, indeed humanity itself, on the other.”

The meeting came as Britain prepares to mark its own Holocaust remembrance day on Sunday, the anniversary of the liberation of the Bergen Belsen concentration camp by British troops in 1945.

“The Mail on Sunday has passed its evidence to the Metropolitan Police,” the paper noted. 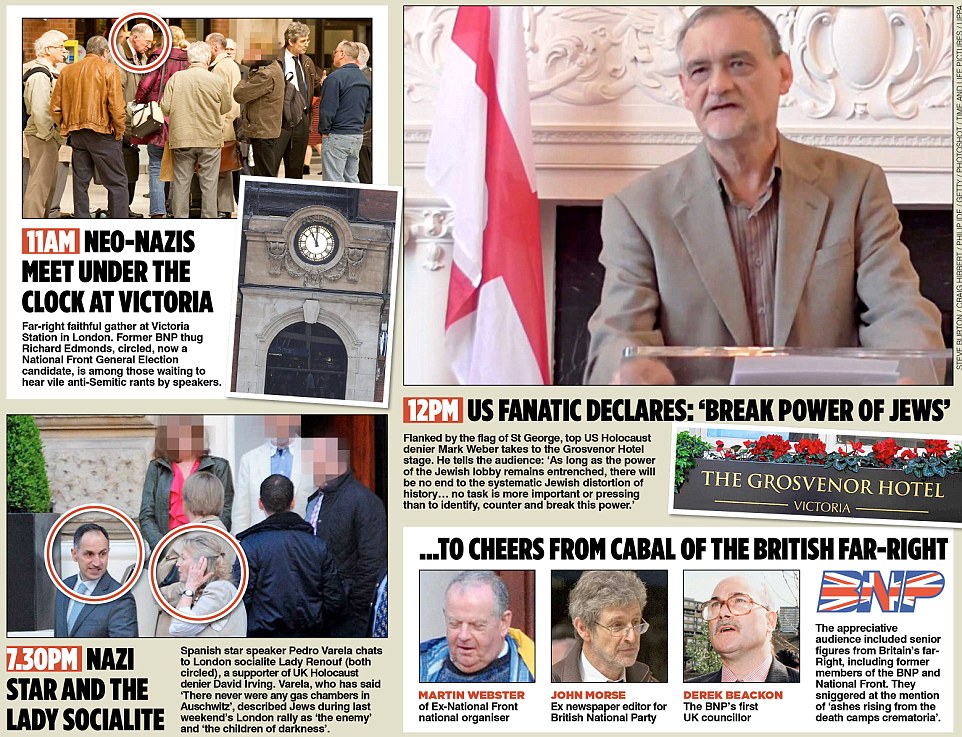