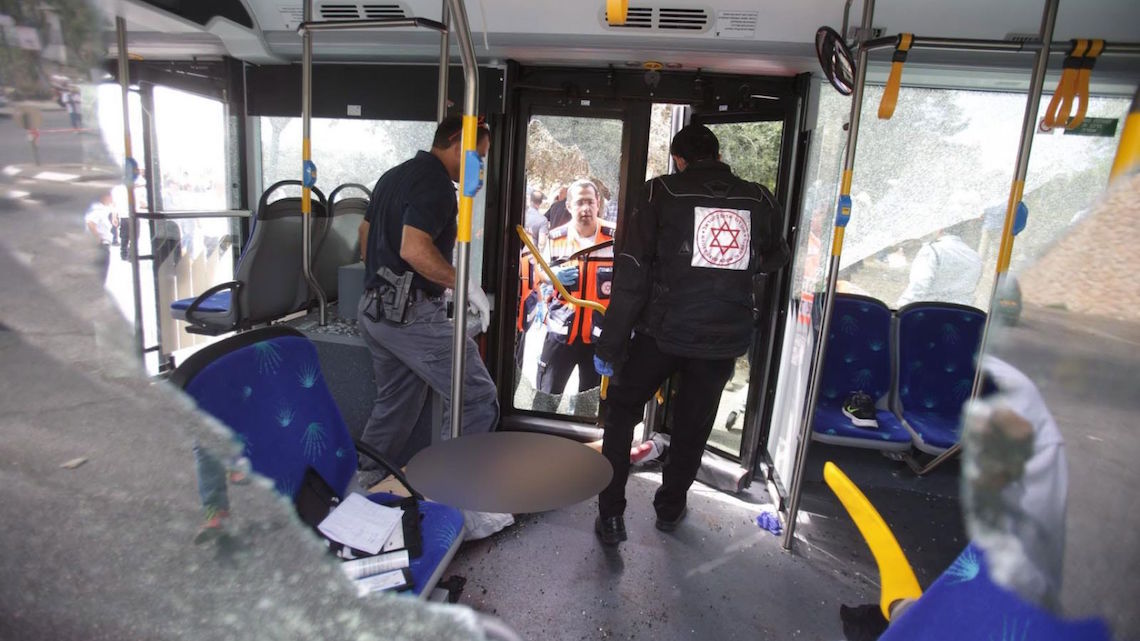 Palestinian leaders,including those of Hamas and Fatah, declared Tuesday as a “Day of Rage”.

Unlike previous days, these attacks all happened within a short time of each other with terrorist cells stating these were not ‘lone wolf’ attacks but carefully planned out. Here are the incidents.

Two terrorists – Baha Aliyan, 22, and Bilal Ranem, 23, both from Jabel Mukaber – boarded the number 78 bus in Jerusalem, one armed with a gun and the other with a knife.

They started shooting and stabbing passengers while the bus kept moving, killing a man in his 60s and wounding 10 others. One of the wounded, a man in his 40s, was evacuated in critical condition and was declared dead at the hospital.

Two others were seriously wounded – women aged around 60 and 40, who suffered stab wounds to their upper body. Two others were in moderate condition: a woman of about 60 years old with gunshot wounds to her upper body and a man in his 30s. Three were lightly wounded, and two were suffering from shock.

A security guard at the scene was able to overpower one of the terrorists and shoot him. The attacker then tried to get up and resume his attack, but the security guard shot him again.

The second terrorist locked the bus’ doors in an attempt to stop security forces from boarding, as well as stopping passengers from fleeing. Policemen opened fire at him from outside the bus.

Aliyan was killed, while Ranem was wounded and neutralised.

Terrorist drives car into crowd, gets out and stabs victims, killing one, injuring others. Attacker shot and in critical condition.

A rabbi was killed and two other people seriously wounded when a driver rammed his car into a crowd on Malchei Israel Street in the Makor Baruch neighborhood in Jerusalem.

The attacker stepped out of the crashed vehicle and repeatedly stabbed the wounded with a meat cleaver. Within seconds of the attack the man was shot by a nearby man, but the terrorist got up and was shot again.

Police arrived within minutes and shot the man again after he still tried to carry on his attack. The terrorist is in a critical condition in hospital.

Warning: Graphic video of attack. This is a blurred video which hides the details but still shows the brutality of the attack.

Four stabbed in Ra’anana, one in critical condition, terrorist arrested.

A 28-year-old man from East Jerusalem stabbed four people sitting at a café, wounding one seriously and three lightly.

The attacker then fled down Ahuza Street while a group of bystanders gave chase. A motorist who saw the scene unfolding hit the terrorist with his car, and then he and another motorist grabbed him and subdued him until police arrived.

The attack took place on the central Ahuza street in the city north of Tel Aviv when a Palestinian approached a man at a bus stop and stabbed him.

The victim, a 32-year-old man, suffered light wounds to his upper body in the incident, a spokesperson for the Magen David Adom rescue service said.

The attacker was taken into custody with serious injuries after being beaten by passers-by to stop the attack, police and MDA officials said.

Police confirmed he had not been shot.

A Jewish man was hospitalised with light to moderate wounds after he was stabbed in a parking lot in Haifa suburb of Kiryat Ata by a Jewish man who mistook him for an Arab, in what authorities are characterising as an apparently misdirected hate crime. The assailant was apparently seeking to harm an Arab in revenge for a series of Arab terror attacks on Jews.

According to Army Radio, the attacker, an Israeli Jew, approached an Arab man near Kiryat Ata’s Ikea furniture store and asked him if he was Arab. The Arab man was reportedly frightened by the question, and said he was not.

Minutes later, the attacker identified another passerby, concluded he was Arab from his appearance, and proceeded to stab him in his upper torso.

The victim, it turned out, was an Israeli Jew.

The attacker was arrested and the victim was taken to a local hospital and treated for a stab wound in his upper torso.