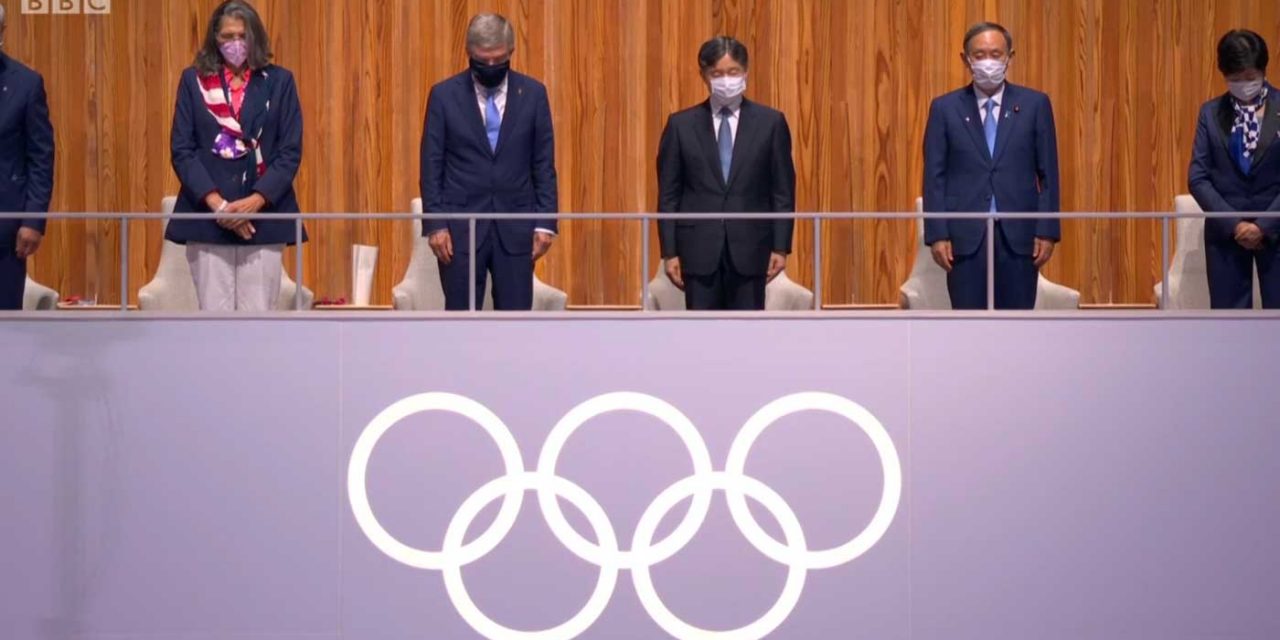 The Tokyo 2020 Olympic Games is the first Olympics to honour the memory of the eleven athletes and coaches of the Israeli Olympic Team who were murdered by Palestinian terrorists during the 1972 Olympic Games in Munich.

During the ceremony, victims of various tragedies were honoured including all those who have lost their lives to the COVID-19 pandemic and all athletes who lost their lives during the Olympic games in the past. The Israeli delegation that was killed at the Munich Games was specifically mentioned.

“In particular we remember those who lost their lives during the Olympic games,” the announcer said. “One group still holds a strong place in all our memories and stands for all of those we have lost at the games: the members of the Israel delegation at the Olympic Games Munich 1972.”

A moment of silence was offered inside the stadium, alongside a dance performance honouring the dead.

This is the first time the Munich Massacre victims were honoured during an Olympic Games. Only on one other occasion have they been remembered and that was in a ceremony before the 2016 Rio Olympics and it took place in a small gathering two days before the games began. Then in September 2017, 45 years after the massacre, the inauguration of the “Munich 1972 massacre memorial” took place at Munich’s Olympic Park and was attended by Israeli President Reuven Rivlin and his German counterpart Frank-Walter Steinmeier.

These events happened outside the Olympics but were clear steps in the right direction. Now, the victims have been honoured in a powerful way in front of all the world during an Olympic Games.

Families of the Munich victims had campaigned for years for greater public recognition for the dead from the International Olympic Committee. The IOC faced criticism for refusing to hold a moment of silence for the Israeli victims during the opening of the 2012 London Games, 40 years after the attack.

Widows Ankie Spitzer and Ilana Romano were at Friday’s ceremony.

“Finally there is justice for the husbands, sons and fathers murdered at Munich,” the two said in a joint statement. “We went through 49 years of struggle and never gave up. [We] cannot hold back our tears. This is the moment we’ve waited for.”

“Today, for the first time at the Olympic Games, there was an official commemoration for the massacre of the 11 members of the Israeli delegation to the Munich Olympics. I applaud this important historic moment,” he said. “May their memories be a blessing.”

Igal Carmi, head of the Israeli Olympic Committee, said Israel was “grateful” for the 2021 tribute.

“The International Olympic Committee fulfilled the yearnings of the families of the 11 Israeli Munich victims and bravely commemorated [them] at the opening ceremony tonight,” he said in a statement.

He said German IOC President Thomas Bach had promised the families of the dead “that the Olympic Movement would remember the 11 victims of Munich, for the first time in history, after 49 years. He promised, and he was true to his word.”

For 49 years, Arab countries had threatened to boycott any Olympic games that commemorated the tragedy and so there was silence from the Olympic Committee on the issue.

It is unclear whether there will be condemnation from some countries for this move, but if there is any it is likely to take place behind closed doors.

The Palestinians still honour the terrorists of the Munich Massacre, and so have some British politicians…

To this day the Palestinian leadership of both Hamas and Fatah hold the terrorists of Black September in high regard.

In January 2021, Fatah (the leaders of the Palestinian Authority) posted a video on their Facebook page which praised the “quality operation” and honoured Ali hassan Salameh, one of the Black September commanders.

In the video, the narrator tells viewers: “Ali ‎Hassan Salameh was characterized by his long arm, which reached ‎across all of Europe, and by high intelligence that enabled him to hunt ‎Mossad agents.”

The narrator goes on to state that “after he was appointed to command the special ‎operations [i.e., terror attacks] against the Israeli intelligence service in ‎the world, his name was connected to many quality operations, such as ‎sending explosive packages to many Mossad agents in Europe.”

This praising of terrorism, even this year, shows that the Palestinian Authority still support violence against Israelis, including innocent civilian athletes. And it was for too long that the world has been silent in challenging the PA for this.

Hamas also shares an affinity with Black September terrorists. Ismail Haniyeh has spoken of them and their operation and in 2012 he was pictured praying at the grave of the Black September leader and mastermind of the entire operation, Salah Khalaf (Abu Iyad).

Sadly, UK politicians have also honoured the mastermind of the Munich Massacre.

In 2014, Jeremy Corbyn laid a wreath at the same grave of Salah Khalaf (Abu Iyad) in the same style as Hamas’ leader Haniyeh. There is clear evidence for this, as we stated in our in-depth article here.

Shockingly, that same year, the Stop the War Coalition (which Jeremy Corbyn was chairman of at the time) published an article that downplayed the Munich Massacre and blamed it on Israel.

The disgusting piece claimed Palestinian terrorists had no intention of killing the 11 Israeli athletes and coaches taken hostage at the 1972 Olympics. And it blamed Israel for provoking the deaths by refusing to cede to the terrorists’ demands to swap the hostages for Palestinian prisoners.

There are still many who need to understand the truth about the Munich Massacre and this is why it is so important for the Olympic Committee to honour the victims. And we hope this will be something that happens in future Olympics also.

The same hatred of Israel and the Jewish people that drove the Black September terrorists to murder Israeli athletes in 1972 is the same hatred that drives Palestinian terrorists under Hamas and Fatah today to carry out attacks on innocent Israelis.