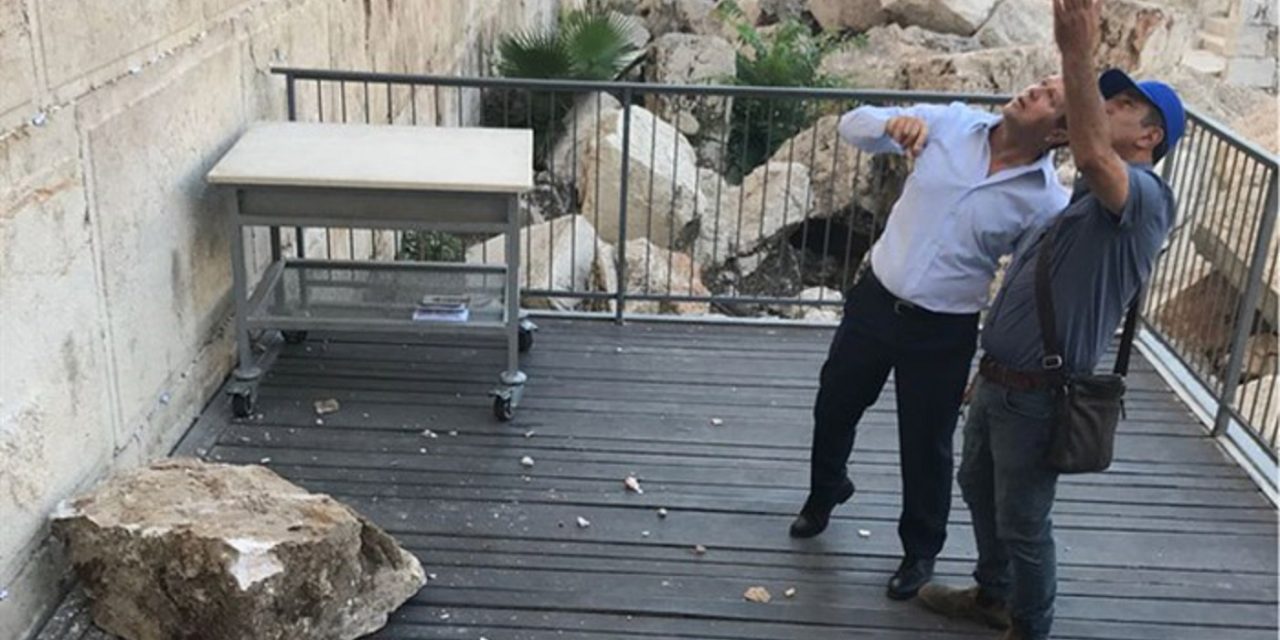 Severe clashes between Muslim worshippers and Israeli security forces near the Temple Mount were reported on Friday in the early afternoon after Friday prayers.

According to the Jerusalem Police Spokesperson, when the prayer service on the Temple Mount ended,  rioters began firing fireworks directly at police forces.

It follows false claims earlier this week that the stone that fell from the Western Wall earlier this week proves that Israel has devised a plan to destroy the al-Aqsa Mosque in Jerusalem, a spokesperson for the ruling Fatah faction headed by Palestinian Authority President Mahmoud Abbas claimed on Thursday.

A spokesperson for Fatah has said that the accidental dislodging of a stone in the Western Wall this week was a “dangerous sign of what was happening in the al-Aqsa Mosque and its surroundings” – a reference to the archaeological work that has been going on near the Temple Mount for decades in the site called the Davidson Center, the Jerusalem Archaeological Park.

An Israel Antiquities Authority crane on Wednesday removed the 200-kg. ashlar, which fell into the nearly-empty egalitarian plaza, also known as the “Ezrat Yisrael.” No one was hurt.

IAA archaeologists have yet to determine what caused the ancient stone to fall.

“We affirm that al-Aqsa Mosque and its surroundings, including what is beneath it, are purely Islamic,” Qawassmeh said. “The Jews have no right to it.”

He said that visits by Jews to the Temple Mount, as well as Israeli archaeological excavations “beneath” the compound, which Palestinians call al-Haram ash-Sharif are a “crime against all religions and a blatant violation of the sanctity of the religion of Islam.”

A special crane on Wed morning removed the stone which fell from the Western Wall from the egalitarian prayer plaza. The Antiquities Authority sees this event as a wake-up call. "another stone could fall & we need to begin a national operation in order to preserve the stones. pic.twitter.com/Mo7mhqOo7f

In the past few years, Palestinians have been strongly condemning visits by Jewish groups to the Temple Mount and say that “extremist Jewish settlers and radicals are storming al-Aqsa Mosque.”

He also accused the Israeli government of plotting to “bury any prospect of coexistence in the region.”
Jerusalem, he added, is “purely Arab and Palestinian, and there can be no peace and stability without ending Israel’s occupation of the city.”

Omar Kiswani, director of al-Aqsa Mosque, also weighed in on the fall of the boulder, claiming it was the direct result of Israeli archaeological excavations. The Israeli authorities banned officials of the Waqf Department in Jerusalem from examining the area where the stone fell, he said.

The incident, Kiswani said, confirms the Waqf Department’s assertions that Israel is carrying out dangerous archaeological excavation work in the area of the Temple Mount. He called for dispatching an international committee to the area to probe Israel’s actions.