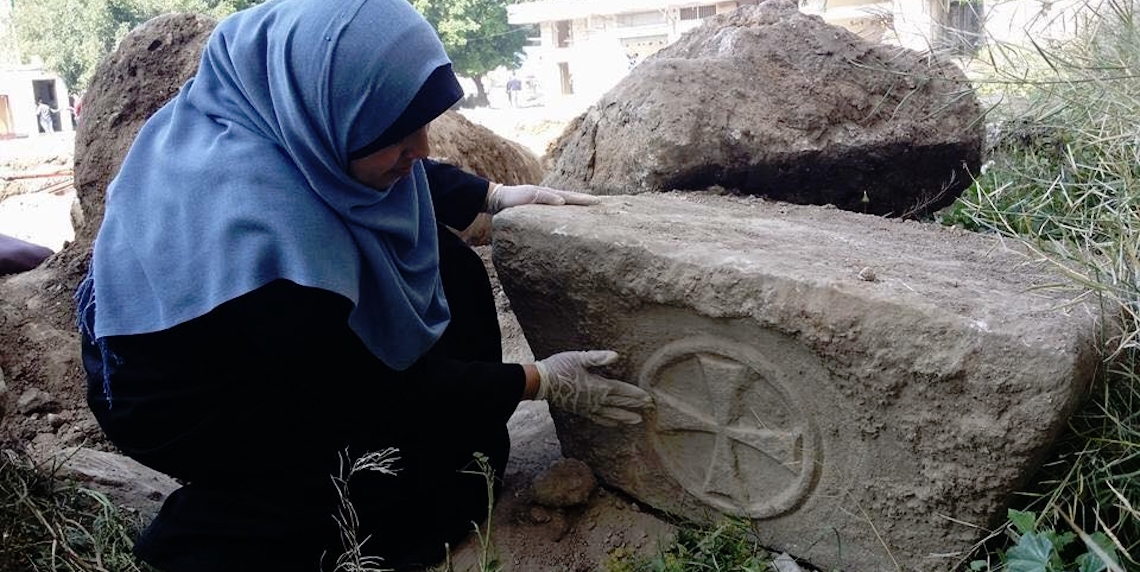 Christians and archaeologists were excited when the ruins of an ancient Byzantine church were discovered in Gaza City. Soon after the ancient ruins were destroyed in what Palestinian Christians are describing as ISIS-like tactics by Hamas in trying to erase Christian history.

The discovery was made earlier this month by construction workers who were digging the foundations for a new shopping centre in Gaza’s largest city, and as a result the antiquities ministry was called in. They immediately uncovered dozens of pieces.

Gaza, or in Hebrew, Azza, was a prosperous seaport during the Roman period, with a diverse population of Greeks, Romans, Jews, Egyptians and Persians. Pagan temples were destroyed in the late 4th and early 5th Centuries AD and there was widespread church-building.

During that era, there was a great interest among the Byzantine rulers to build churches in what is now known as the Gaza Strip.

That continued until the Muslim general Amr ibn al-As conquered Gaza in 637 AD, after which most of the population adopted Islam and Christian places of worship were abandoned.

“Our first thought is that the site is a cathedral or a church from the Byzantine period,” said Jamal Abu Rida, the general director of the PA antiquities ministry. “I dare say the place is of historical value,” he said.

However, the joy of making such a find was short lived as calls to halt building work were ignored, the Jerusalem Post reported. They continued shifting huge mounds of dirt which resulted in most of the artefacts being destroyed. 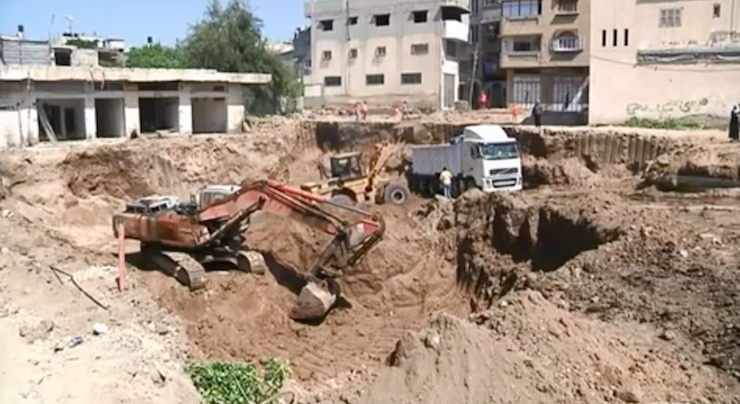 Digging continues despite protests. The ancient ruins are destroyed.

These actions sparked outrage by both Palestinian Christians and archaeologists who blamed both Hamas and the Palestinian Authority for trying to erase Christian history and accusing them of ISIS like tactics to demolish historic sites.

“Whether it was a church or something else, this is a form of intellectual terrorism and retardation,” commented Anton Kamil Nasser, a Palestinian Christian.

The construction work is being carried in an area that is under the control of Hamas. Sources in the Gaza said that the Wakf (Islamic trust) Ministry in the Strip was responsible for the construction.

“They used bulldozers to remove the antiquities and no one ordered a freeze of the construction work at this important archeological site,” said Father Ibrahim Nairouz, a priest in the Episcopal Diocese of Jerusalem who lives in Nablus. 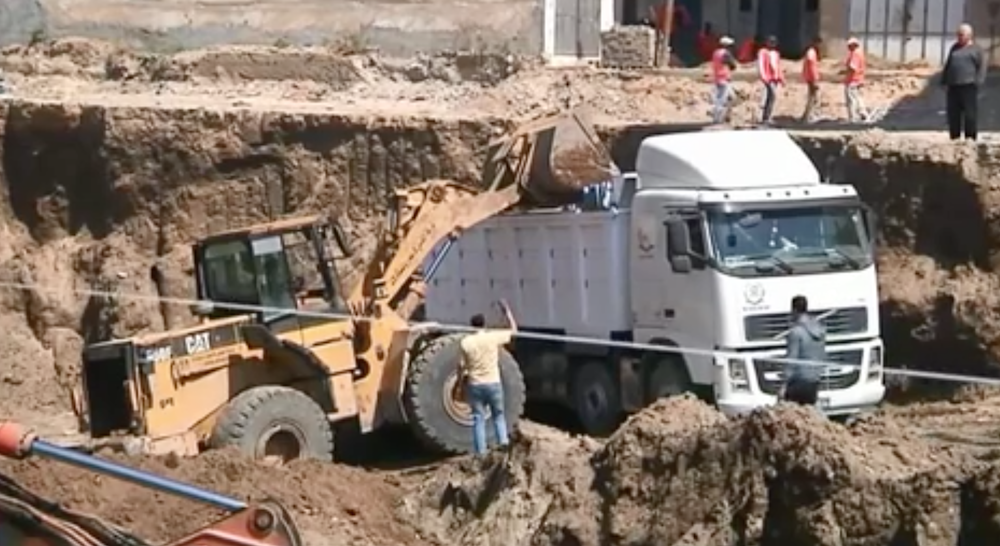 “Had they found the remains of a mosque or synagogue or any other ancient structure, would they have dealt with them in the same manner?” Nairouz asked. “Or are they doing this because it’s an ancient church?” His criticism came in a letter he wrote to PA Prime Minister Rami Hamdallah and Minister of Antiquities and Tourism Rula Maa’yaa.

“It’s obvious that Christian legacy and human beings are being targeted in our region,” the priest charged.

He also accused the PA of giving Islamic names to two Christian and Jewish holy sites in Nablus – a monastery and the stairway known as the Jews’ Steps.

Suleiman Fayoumi, another Christian from Nablus, commented, “How are the Wakf officials in Gaza different from ISIS when they bulldoze antiquities and a religious and cultural treasure?”

Another man, Nick Bandak of Bethlehem said it was “disgraceful” and “barbaric” to remove the remains of a church in this way. “Are they trying to change history that has proven that Gaza was one of the ancient cities for Christians?” he asked.

When discoveries of this nature are made in Israel as in many other places of the world, construction is immediately halted and archaeologists move in. However, in this case, and it would appear in other cases in Gaza, these requests are ignored.

“Shame on us,” remarked a Christian woman from East Jerusalem. “If this happened under the Jews, they would have turned the site into a museum.”

Various organisations were contacted to help with the preservation of this site, such as UNESCO, but the requests fell on deaf ears.

And as is expected when something like this happens in Gaza, the global media is silent. When ISIS destroys historic artefacts it makes global news. When Israel is to blame, the same can be said, yet this has been met with a media blackout.

Abdullah Kamal, a staff member at Al-Quds University in Jerusalem, said: “Regrettably, the silence over this destruction of this Heritage and historic site in our country is tantamount to a crime.” 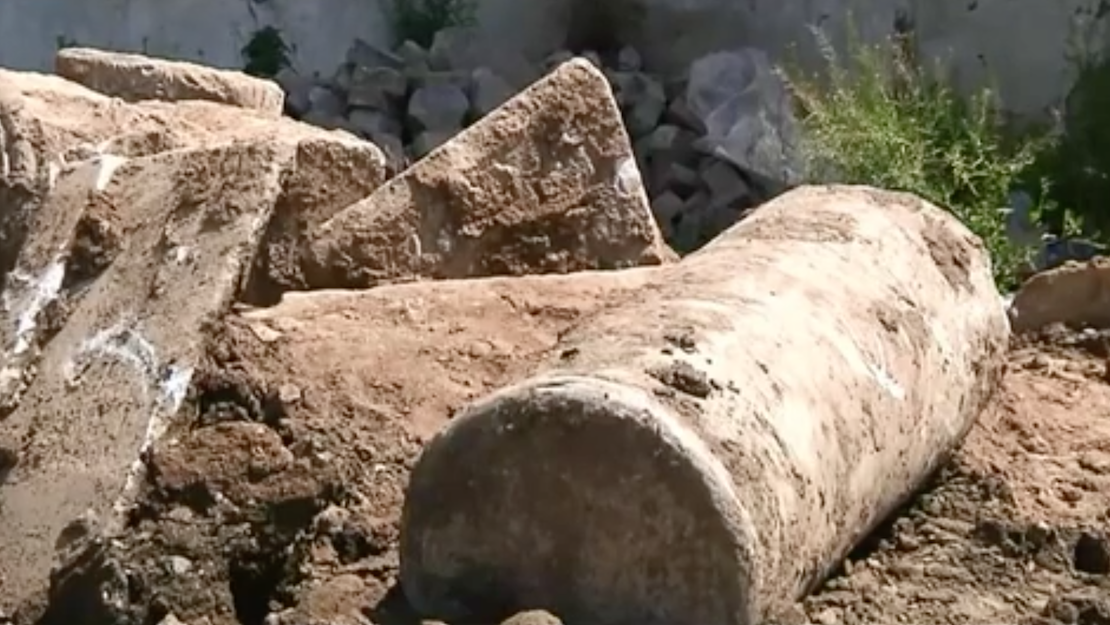 Marble pillars from the ancient ruins found at the site.

Sami Khalil, a Christian from the West Bank city of Nablus, wrote: “I think that silence is up to the stage of conniving. But the question is where are the artists to preserve our Christian Heritage? Where are the heads of the churches in Jerusalem and the world? Where are the bishops? Where are the Vatican and UNESCO? Where are the leaders and politicians who talk, talk, talk about national unity and the preservation of holy sites? Or is this a collective conspiracy to end our existence and history in the East?”

“This incident should be publicised so that the world would know the truth about Hamas,” said Samir Qumsieh, chairman of the United Christian Society in Bethlehem.

The Gatestone Institute notes that all is not well under the Palestinian Authority and Hamas for the Christian minority.

It is no secret that a growing number of Christians in the West Bank and Gaza Strip feel that they are being systematically targeted by both the PA and Hamas for being Christians.