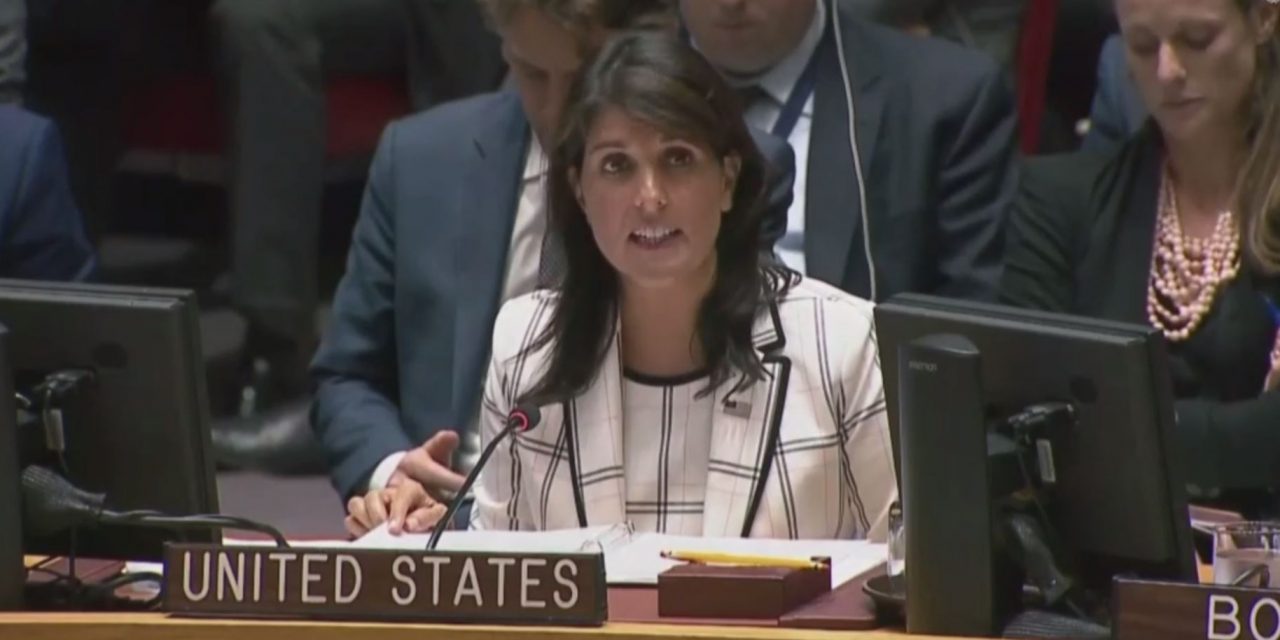 US Ambassador to the UN Nikki Haley has slammed the UN Security Council on Wednesday for failing to condemn Hamas rocket attacks on Israel, accusing the international body of bias and hypocrisy.

At the urging of the United States, the UN’s Security Council held an emergency meeting Wednesday afternoon to discuss the rocket and mortar barrage sent into Israel by Hamas and Islamic Jihad terrorists Tuesday that injured seven Israelis, one moderately.

However, a unanimous consensus could not be reached on the Americans’ draft resolution condemning the indiscriminate attacks.

Kuwait, a non-permanent council member, blocked the initiative. It has its own proposal waiting for the UNSC’s consideration, one that calls for “measures” to protect civilian Palestinians in both Gaza and Judea and Samaria.

MUST WATCH: Nikki Haley speaks the truth at yesterday's UN Security Council in which a draft resolution condeming attacks against Israel was blocked."To allow Hamas to continue to get away with its terrorist acts, and to somehow expect Israel to sit on its hands when it is attacked, is the height of hypocrisy."

Posted by Christians United for Israel – UK on Thursday, 31 May 2018

You might think that the rest of the Security Council would join us in condemning a terrorist organisation like Hamas. There shouldn’t be any debate about this. But of course, because this attack involves Israel, the standard is different,” she said in her opening remarks.

The United States, she said, drafted a Security Council statement that would have condemned Hamas for launching rockets and endangering civilians.

“This should have been a no brainer. You would think no one would want to side with Hamas when it comes to condemning rocket launches but the statement was blocked,” Haley added.

“Apparently some Security Council members did not think that Hamas launching rockets qualifies as terrorism. The United States begs to differ,” she said.

Kuwait has also recently tried passing one-sided resolutions that would have condemned Israel’s killing of Palestinians during the recent Gazan border clashes without mentioning the protestors’ violence and attempts to breach the fence and kill Israelis. Those were stymied by a veto from United States Ambassador Nikki Haley, and the upcoming one will have the same result.

While this body of the UN could not agree that shooting over 100 rockets and mortars blindly into Israeli towns and villages with the aim of hurting civilians was to be roundly criticized, the international organisation’s Special Coordinator for the Middle East Peace Process did speak up Tuesday against Hamas.

“As kids were preparing for school this morning a barrage of rockets from Gaza fell on southern Israel, one landed outside a kindergarten. I know the resilience of communities in southern Israel but indiscriminate attacks are totally unacceptable and to be condemned unreservedly,” Nickolay Mladenov tweeted in a rare show of support for the Jewish state.

Another infrequent backer of Israel who echoed the criticism was the European Union’s (EU) foreign policy chief, Federica Mogherini, who stated categorically that “Indiscriminate attacks against civilians are completely unacceptable under any circumstances.”

Other countries that joined the US in condemning the Hamas and Islamic Jihad rocket terror include France, Britain, Canada, Italy, Austria and even Ireland, long known as a bastion of pro-Palestinian support.