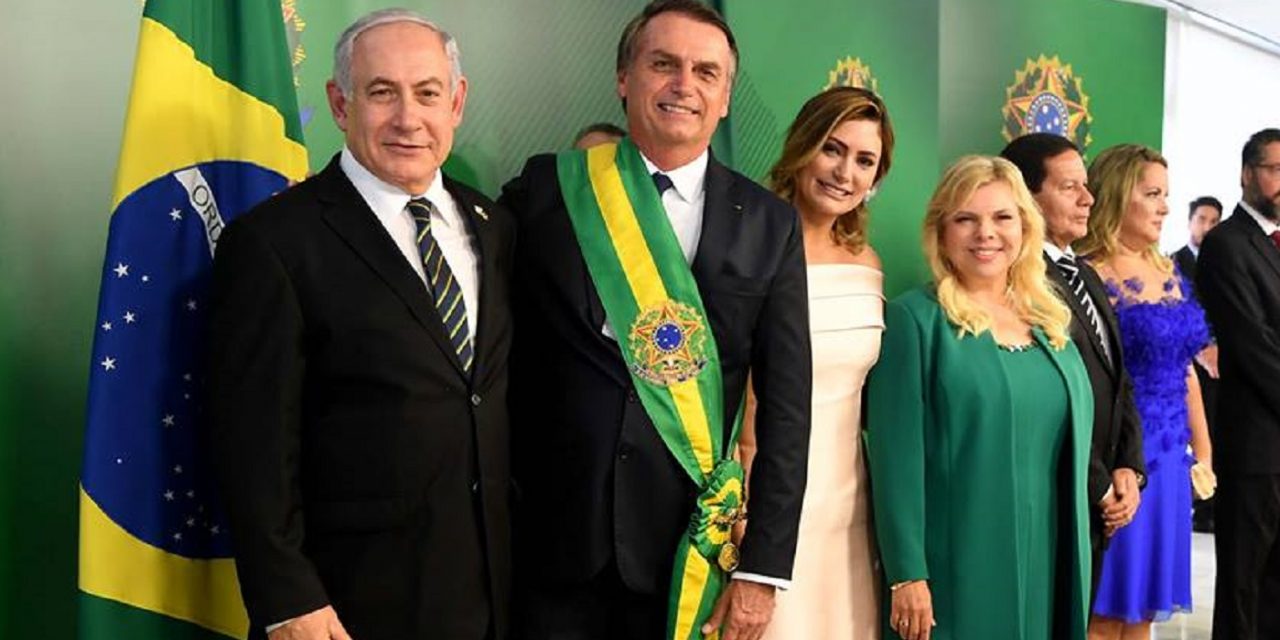 Benjamin Netanyahu on Sunday praised the Brazilian Evangelical Christian community for its strong support of Israel during the first ever visit to Brazil by an Israeli Prime Minister.

The country’s large Evangelical population — up to one-fifth of the country, according to figures — was credited with sweeping President Jair Bolsonaro’s to power earlier this year.

“You know that President Bolsonaro’s first name in Hebrew is Yair, which is also the name of our son,” said Netanyahu. “But Yair means something in Hebrew: he who brings light. And I think that we have now an opportunity together to bring a lot of light to the people of Brazil and the people of Israel. This is an alliance of brothers.”

The comments came during the historic trip in which the PM Netanyahu and wife Sara attended Bolsonaro’s inauguration ceremony.

During the visit, Netanyahu said that Bolsonaro had informed him that he would like to relocate Brazilian embassy from Tel Aviv to Jerusalem, keeping with a promise he made during his election campaign.

Posted by The Prime Minister of Israel on Tuesday, 1 January 2019

The statement came after Netanyahu and Bolsonaro met on Friday, and after an Israeli government source insisted Saturday that Brazil’s embassy move to Jerusalem was merely “a matter of time.”

Celebrating Netanyahu’s visit, the Brazilian state of Amazonas issued a commemorative stamp with a picture of the prime minister on it, dedicated by Christian Israel supporters in the city of Manaus.

The stamp includes a mention of Israel’s 70th birthday, the words “Mazal Tov” and the word “Saviour” written on a Jewish star.

Bibi depicted as the savior of Brazilian evangelicals in a new stamp | Watch pic.twitter.com/3VWRDT8Jfc

Speaking at a joint-press conference last Friday, the Brazilian President-elect, now President, referred to relations with Israel and the prime minister as, “More than partners, we will be brothers in the future, in economy, technology, all that can bring benefit to our two countries.”

Netanyahu echoed Bolsonaro, stating on their meeting, “President Bolsonaro said that this is not just a friendship or an alliance of interests, but also an alliance of brothers. There is much in this because we are facing a new world in which people can achieve amazing things. With cooperation and brotherhood it is possible to achieve things that cannot be imagined. We agreed between us on the way to take this cooperation to new heights.”

Netanyahu said, “Israel is the promised land. Brazil is of land of promise. You have been given the stewardship of this country to realise that promise. We want to be your partners in this effort, we think our cooperation can give both our people tremendous benefits – in the economy, employment, security, agriculture, water, industry, in every domain of human endeavour.”

Netanyahu also spoke of Jewish history and Jerusalem, referring to Biblical prophecies, stating, “We have returned to Jerusalem and – like in the Biblical prophecies – we rebuilt Zion. We overcame many enemies. We gathered in our exiles and we rebuilt our land. We built a strong military, among the strongest in the world. We built an economy that is among the strongest in the world. We built industry, science, culture and now we are building with our friends around the world. ‘For Israel is not widowed.’”