Last week a photo of a young Muslim woman called Zakia Belkhiri subtly undermining an anti-Islam demonstration by using the protesters as a backdrop for a selfie went viral. Her story was taken by many in the left-wing media to be an act of defiance against Islamophobia.

The picture has been described as ‘iconic’ and has been trending on Social Media, widely shared by tens-of-thousands of people over the past week. It was also picked up by major news networks, including the BBC and the Telegraph.

At the time Ms Belkhiri told BBC trending, “This wasn’t a protest at all, it was just to share joy and peace”.

The 22-year-old added that she wanted “to show that things can be different. And that we can live together, not next to each other but with each other”.

However, since then what the BBC describes as “deeply disturbing anti-Semitic statements” made by Ms Belkhiri on social media have come to light.

In one tweet dating from November 2012, she wrote: “Hitler didn’t kill all the Jews, he left some. So we know why he was killing them.” This is a comment is in relation to a common anti-Semitic ‘joke’ that tries to justify the actions of Hitler by saying he left some Jews alive to show the rest of the world how bad they really are and why he was justified in committing the Holocaust.

In another Facebook post from March 2014, she used an illegible word to describe Jews before adding: “******* Jews! I hate them so much.”

After these and other statements emerged, Ms Belkhiri claimed that the posts had been photo shopped. She then wrote another post trying to justify her comments saying, “my opinion many years ago was meant on the Zionist back then, that spread hate instead of love so to all the other jews peace be upon you!”

However, for many of those who responded to her tweet, this attempted justification has, if anything, compounded the original offence. One twitter user asked her, “you meant that Zionist Jews deserve to die?” Her twitter account is currently deleted.

She later wrote a full apology on Facebook the next day as follows: 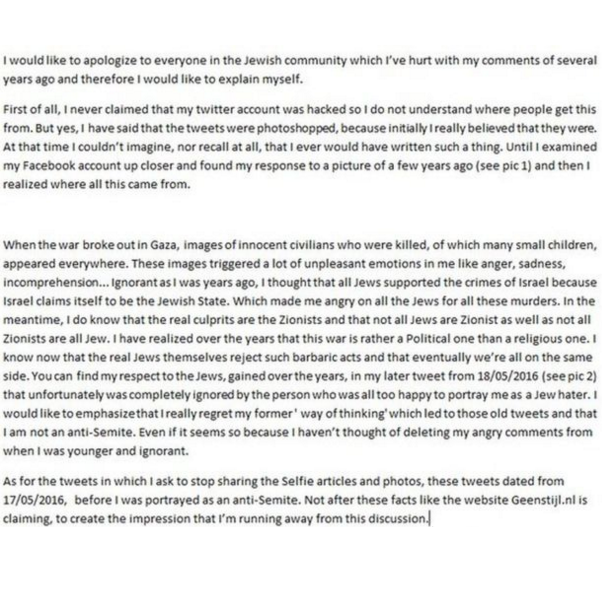