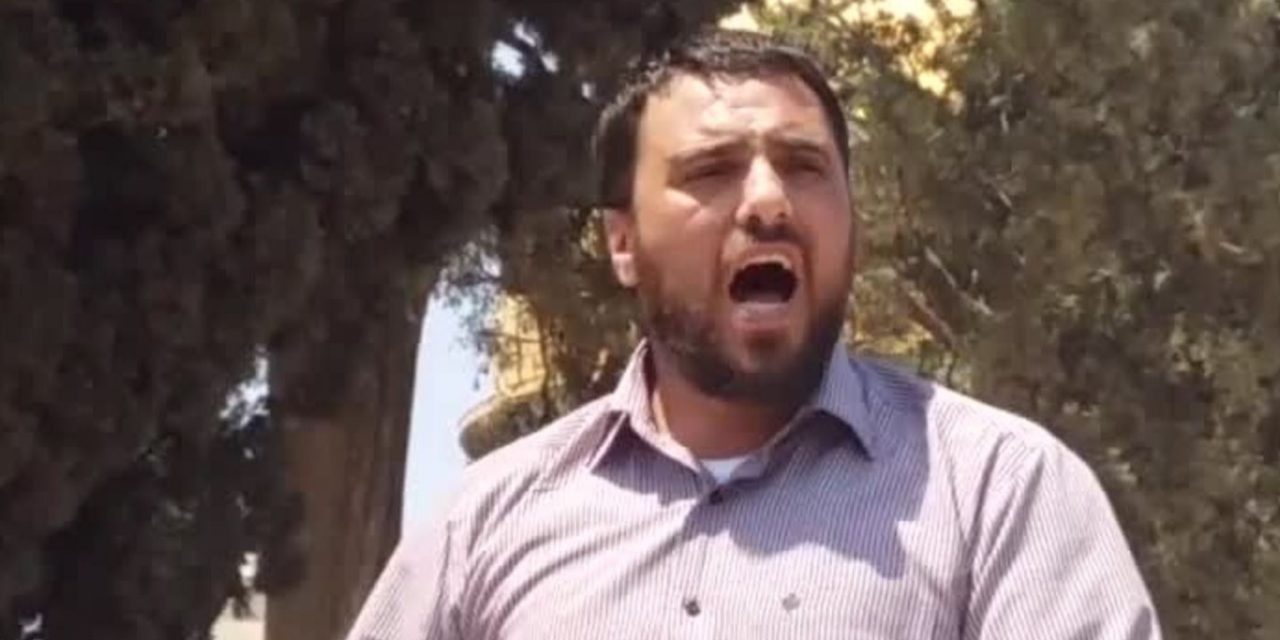 A Palestinian preacher called “to finish off the monstrous entity of the Jews” who are the “vilest” and “most despicable and cowardly of creatures.”

Palestinian preacher Ali Abu Ahmad, speaking at an Al-Aqsa Mosque rally on the Temple Mount in Jerusalem earlier this month, said the “occupation of Palestine” by the Jews, the “vilest” and “most despicable and cowardly of creatures,” was due to the fall of the Islamic Caliphate, and called on Islamic armies to mobilize their forces “to finish off the monstrous entity of the Jews.”

His prayers to “annihilate all the Jews,” to “destroy the [Palestinian] Authority of shame and disgrace,” and to “destroy the rulers of the wicked [Muslim] mini-states” were answered by cries of “amen” by surrounding worshipers, according to a translation of his inciting words by MEMRI (Middle East Media Research Institute).

A video clip of the address was proudly posted on the internet.

Abu Ahmed said the reason for the current situation is that “there is no Caliphate,” no Islamic kingdom.

“Indeed, servants of Allah, with the fall of the Caliphate Palestine was occupied by the Jews, the vilest of creatures, and the place of the Prophet’s nocturnal journey [Al-Aqsa mosque] was defiled, blood was spilled, the honor of women was violated, the elderly were humiliated and the children were killed – by the Jews, the most despicable and cowardly of creatures,” Abu Ahmad said, clearly spouting libel against the Jews from the Jewish people’s most holy place.

He called to the “armies of the Islamic nation, if you take up arms in order to please your masters and your rulers, know that the rulers of the wicked (Muslim) mini-states have let you down, after they turned toward America and the West,” deriding most Middle Eastern Muslim rulers, whom he believes are not dedicated to the Islamic cause.

“On the other hand, if you take up arms to please Allah – and we believe that this is the reason – your time has come. The time for you to mobilize your armies has arrived, in order to come to the aid of the [Palestinian] prisoners, and of the place of the Prophet’s nocturnal journey in Palestine [Al-Aqsa mosque], and in order to support Muslims everywhere. It is time for you to mobilize in order to finish off the monstrous entity of the Jews,” he declared.

He then prays, “Oh Allah, destroy the rulers of the wicked (Muslim) mini-states!” and is answered by “amen.”