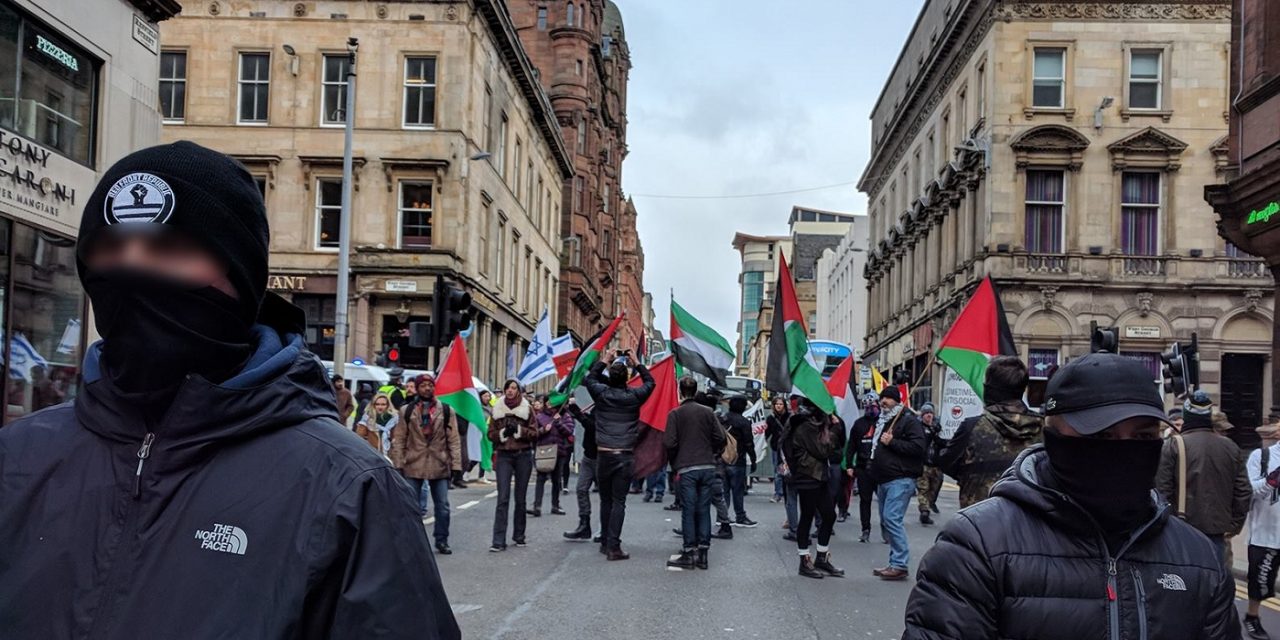 An anti-racism march in Scotland descended into an anti-Israel demonstration when far-left groups intimidated pro-Israel marchers.

At the event, balaclava-clad members of the Red Front Republic (RFR) group, which boasted of its attempts to “block the Zionists” taking part, were involved in a stand-off with pro-Israel supporters during Saturday’s march, ironically called “Stand Up To Racism” with chants of “from Glasgow to Gaza intifada” and “From the River to the sea, Palestine will be free”.

It followed a boycott of the march by Muslim Council of Scotland (MCS) after it was discovered pro-Israel groups would be taking part.

In a statement published on Facebook, the MCS said it was “disappointed to see that SUTR [Stand Up To Racism] will not stand up to apologists for apartheid and racism, in the shape of Cofis [Confederation of Friends of Israel]”.

Speaking to Jewish News after the event Nigel Goodrich, convener of COFIS, said their attendance was a success, but that some marchers “were intimidated by the behaviour of those wearing masks and sunglasses, pushing and jostling, stealing our flags and running away with them.”

He said his organisation are meeting on Monday to discuss whether to report any incidents to the police, adding that the chant “from Glasgow to Gaza intifada” means “murdering Jews”, and is therefore anti-Semitic.

Ahead of the event, COFIS said they had been “aware of aggressive attempts to prevent us from taking part, orchestrated by the Scottish Palestine Solidarity Campaign (SPSC)”.

COFIS said they understood police had asked that they had been asked to keep away from the main body of the march.

Some marched segregated from pro-Palestinian protesters by a line of police officers.

Glasgow Friends of Israel hit out at what they described as “nasty racists on the streets of Glasgow in an anti-racist march”.

Micheline Brannan, chairman of the Scottish Council of Jewish Communities said: “We believe in the anti-racist message which has been hijacked by people ahead of us who are trying to stop our group from marching. They have turned it into a fight between Israel and Palestine. They’ve imported politics of the Middle East onto the streets of Glasgow”.