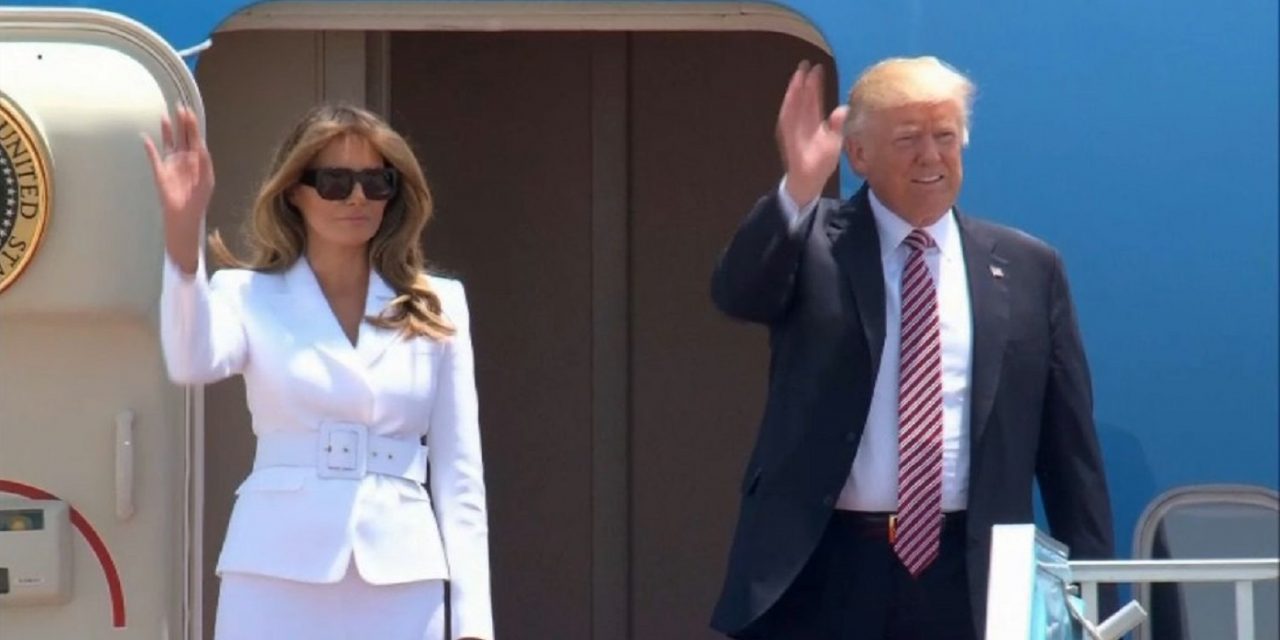 During President Trump’s visit to Israel, he will meet with Prime Minister Benjamin Netanyahu and with President Reuven Rivlin. He will also visit Yad Vashem, the Western Wall ad the Church of the Holy Sepulchre.

Key events will appear here as they happen  (UK times in brackets):

.@POTUS #Trump at Israel Museum: "Israel is a testament to the unbreakable spirit of the Jewish people." #POTUSAbroad #POTUSinIsrael pic.twitter.com/HrXJD4vBeg

14:04 (12:04) President Trump is set to give a keynote address at the Israel Museum shortly as supporters rally outside (Photo: Times of Israel)

13:43 (11:43) President Trump and Melania meet the sister of a Holocaust victm who donated an album to Yad Vashem. A replica is given to Trump 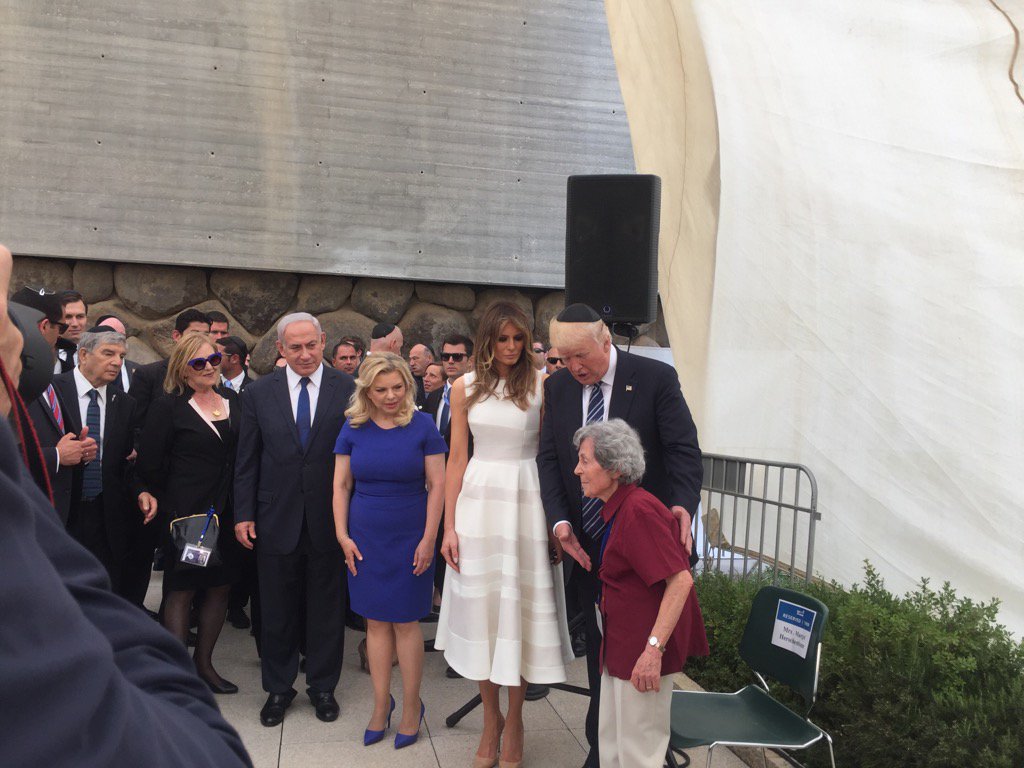 13:35 (11:35) PM Netanyahu is visibly moved after President Trump’s speech and thanks him for “incredible speech”

Trump and his wife, Melania – accompanied by Jared and Ivanka – lay a wreath at Yad Vashem in Jerusalem today. #trumpinisrael pic.twitter.com/Yn0cRVn7m8

13:12 (11:12) LIVE: President Trump with PM Netanyahu and their wives are visiting Yad Vashem and will lay a wreath in memory of the six million Jews murdered in the Holocaust

Times of Israel notes that Trump’s remarks in Bethlehem did not mention a Palestinian state or a two-state solution, phrases he has not uttered at all during his trip to Israel this far.

Trump next to Abbas says clearly that peace cannot take root where terror is tolerated, funded and rewarded. #TrumpInIsrael #jpostontrump

If you missed it, here is the joint press conference with PM Netanyahu and President Trump

20:40 (18:40) PM Netanyahu and President Trump have concluded their joint Press Conference and will now enjoy dinner.

20:22 (18:22) PM Netanyahu: “As we work together, the alliance between our countries will grow ever stronger.” 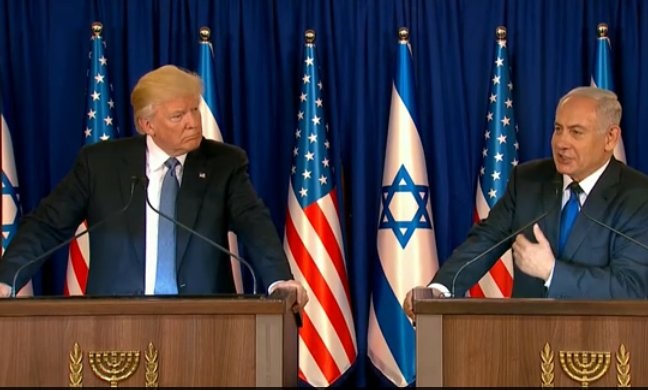 17:33 (15:33) President Trump arrives at the King David Hotel in Jerusalem, will meet and have dinner with Prime Minister Netanyahu this evening.

17:25 (15:35) Earlier, an Almond tree was planted in President Rivlin’s garden in honour of US President’s visit, featuring a quote from Psalms in Hebrew, English & Arabic.

“Request the welfare of Jerusalem; may those who love you enjoy tranquillity. May there be peace in your wall, tranquillity in your palaces (Psalm 122)”

An Almond tree was planted in @PresidentRuvi garden in honor of @POTUS visit, featuring a quote from Psalms in Hebrew, English & Arabic. pic.twitter.com/QcBjvSCRUd

Under heavy guard, Trump becomes the first serving US president to visit the Western Wall, the holiest site where Jews can pray, located in the Old City of Jerusalem.

Trump appears to pray at the wall, places a note inside the crevices before backing away from the holy site. 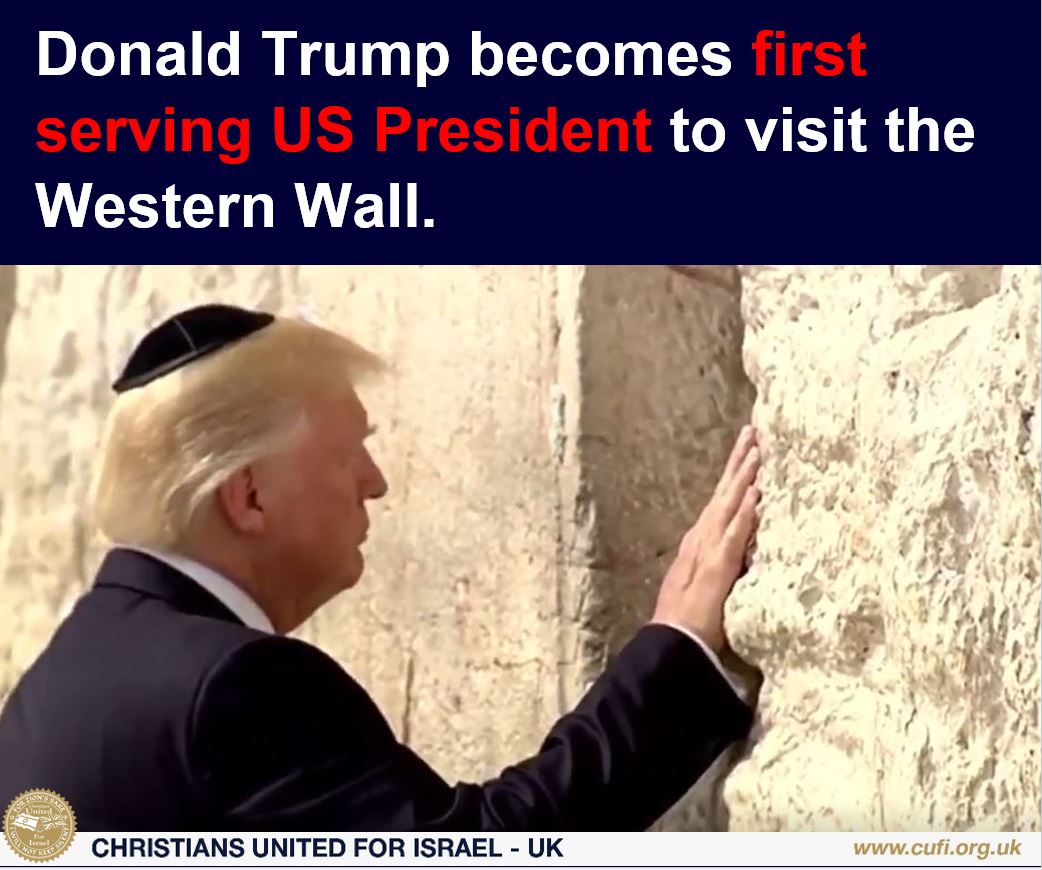 15:53 (13:53)  Representatives of the Catholic, Armenian and Greek-Orthodox church meet the President 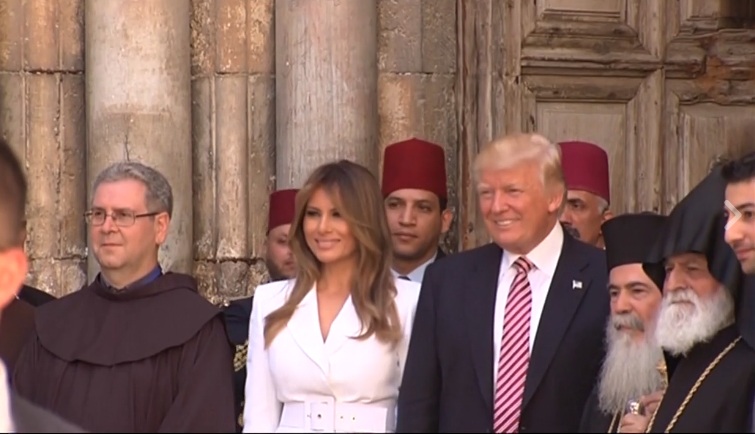 President Trump visits the Church of the Holy Sepulchre in Jerusalem. Watch live on CNN or @CNNgo: https://t.co/UYpqI3w42L pic.twitter.com/ZL9xG1WEm9

If you missed it…here is President Trump’s arrival speech

I have come to this sacred and ancient land to reaffirm the unbreakable bond between the US and state of Israel." #POTUSinIsrael pic.twitter.com/X6a4JjtFPf

Trump’s convoy is headed to the Old City for his visit to the city’s ancient holy sites, starting with the Church of the Holy Sepulchre.

The US president will be met at the ancient church by the Armenian and Greek Orthodox patriarchs of Jerusalem.

He will then head to the Western Wall.

Trump tells Rivlin Israel is an “amazing country. What you’ve done perhaps has virtually never been done before. On my first trip overseas I’ve come to this ancient land to reaffirm the enduring friendship between the United States and the State of Israel.” 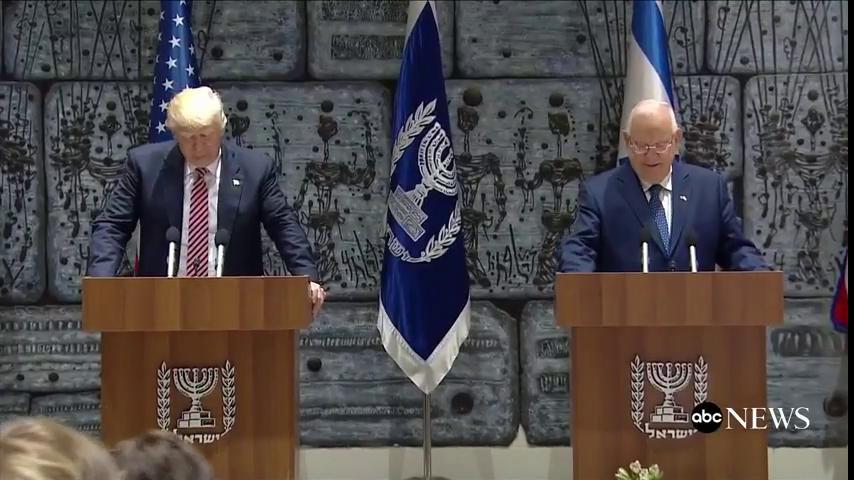 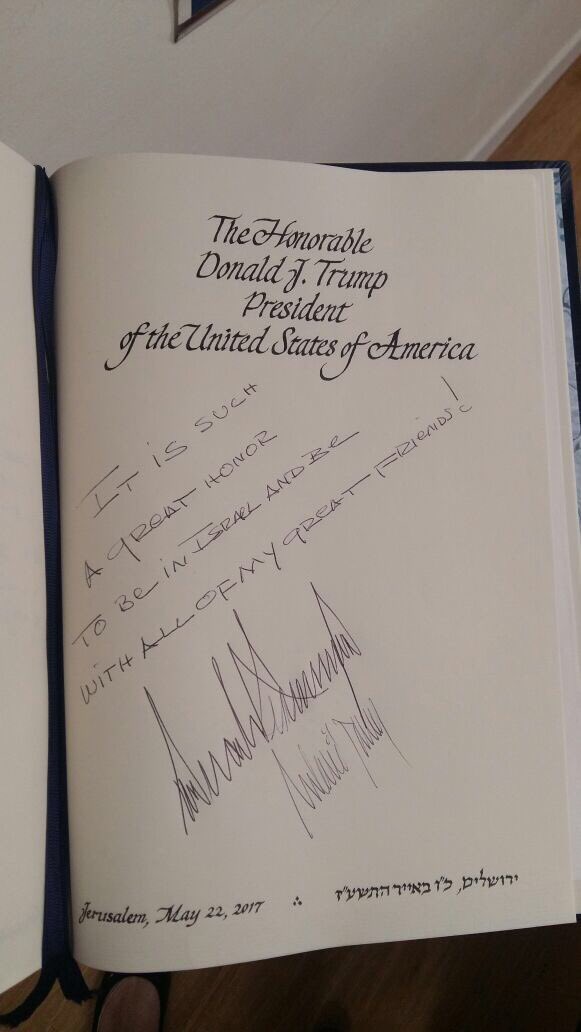 14:10 (12:10) President Trump and wife Melanie have are visiting the presidential residence in Jerusalem 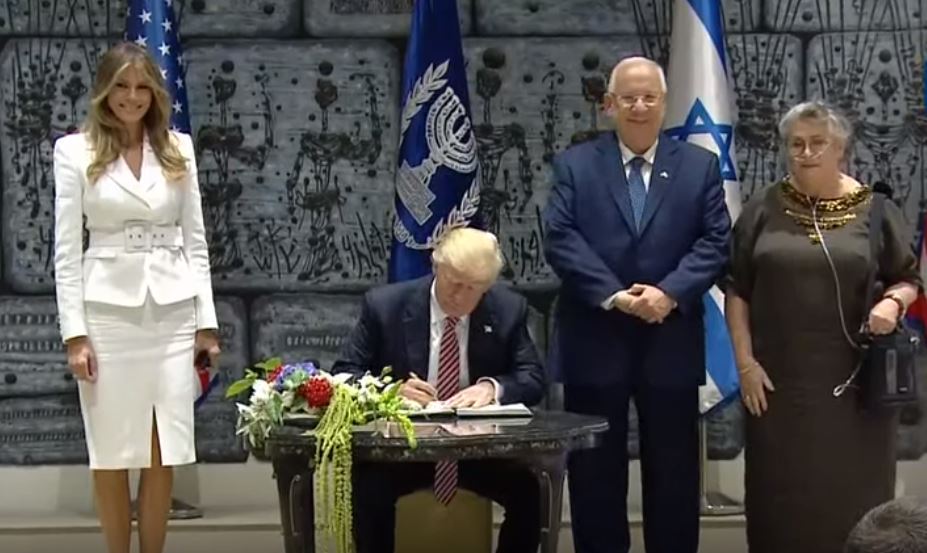 Marine One has landed in the parking lot of Jerusalem's First Station, which has been transformed into a helipad. #POTUSinIsrael pic.twitter.com/0fhyBJIxcy

13:20 (11:20) US President and his wife have left Ben Gurion airport and will now visit Presidential residence 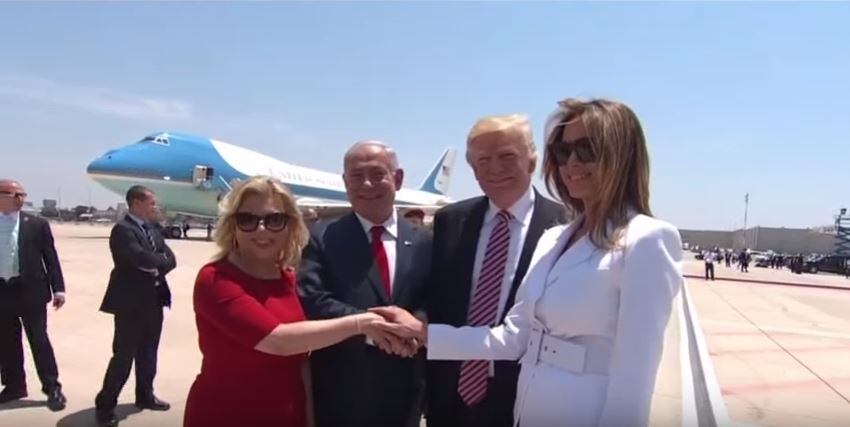 US President’s Donald visit to Israel will begin half an hour late, officials say. Instead of a planned landing at 12:10 p.m. and welcoming ceremony at the Ben Gurion Airport tarmac at 12:15, the ceremony is pushed back to 12:45.

One stop down, four more to go. Onward to Israel. pic.twitter.com/mRQfGn5CYO

18:46 (16:46) – PM Netanyahu speaks ahead of President Trump’s visit tomorrow: “The citizens of Israel will receive you with open arms”

Prime Minister Benjamin Netanyahu made the following remarks at the start of the weekly Cabinet meeting:

“US President Donald Trump and his wife Melania will arrive tomorrow on an historic visit to the State of Israel. Senior administration and White House officials will arrive together with them. This is President Trump’s first visit outside the US, and the honor is ours that he has chosen to come to Jerusalem, the capital of Israel, and – of course – to the State of Israel.
I will discuss with President Trump ways to strengthen even further the first and strongest alliance with the US. We will strengthen security ties, which are strengthening daily, and we will also discuss ways to advance peace.
Mr. President, we look forward to your visit. The citizens of Israel will receive you with open arms.