Thousands of people have joined an online petition against John Mann after he called Ken Livingstone a “disgusting Nazi apologist”.

The Labour MP made the extraordinary public outburst at Mr Livingstone over his claims Adolf Hitler supported Zionism.

Labour MPs have reacted with fury after John Mann was summoned by the leadership to be told he had made a ‘serious’ mistake by confronting Ken Livingstone.

The Bassetlaw MP accosted the former London Mayor outside TV studios in Westminster, accusing him of being a ‘Nazi apologist’ for citing Hitler in defence of Labour MP Naz Shah.

Mr Livingstone waded into the anti-Semitism row over Ms Shah’s Facebook posts by claiming that the fascist dictator supported ‘Zionism’ before he ‘went mad and ended up killing six million Jews’. 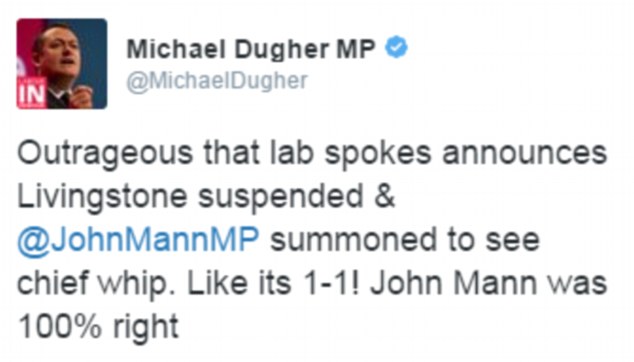 Shortly afterwards party leader Jeremy Corbyn bowed to a tidal wave of protests from his own ranks by suspending his long-standing ally.

But a Labour spokesman added: ‘The Chief Whip has summoned John Mann MP to discuss his conduct.’

The party said later that Rosie Winterton had ‘made it absolutely clear’ to Mr Mann that his conduct had been ‘completely inappropriate’.

The Chief Whip was ‘very clear about how seriously this was viewed’ and ‘John Mann fully accepted and understands this’, Labour said.

A counter-petition has also been launched online in support of John Mann.

Former frontbencher Michael Dugher branded the move ‘outrageous’, suggesting that Mr Corbyn was trying to even the score.

Islwyn MP Chris Evans added that Rosie WInterton should just give Mr Mann a ‘pat on the back’.

‘I hope the Chief Whip has summoned @JohnMannMP to give him a pat on the back,’ he posted.