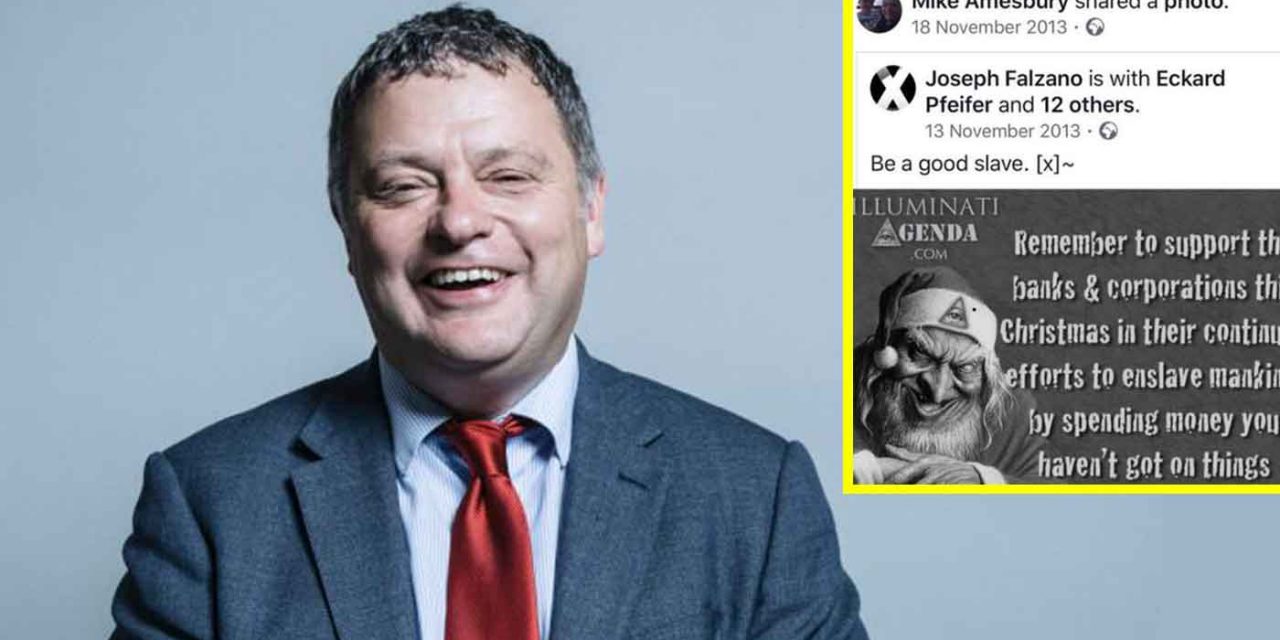 Mike Amesbury, the Shadow Employment Minister, said he was “mortified” to realise that he had posted the offensive image from conspiracy website IlluminatiAgenda.com in 2013.

The picture showed a hook-nosed and bearded Santa Claus rubbing his hands together next to the caption: “Remember to support the banks and corporations this Christmas in their continued efforts to enslave mankind, by spending money you haven’t got on things you don’t need.”

Mr Amesbury initially denied that he had posted such a thing, tweeting, “I did not send this vile nonsense and never would”.

He added, “The profile picture is of me and my son when we as a family went to Barcelona in 2015, curious that this claims to be from 2013”.

But the frontbencher has now issued a statement apologising “unreservedly for this terrible error” after social media users pointed out that the post could still be seen on his Facebook wall.

“I genuinely don’t recall sharing this image and I’m mortified that I did so,” Mr Amesbury said.

“This appalling image contains an antisemitic caricature and a reference to the ‘illuminati’ conspiracy theory.

“I would never have intentionally shared antisemitic tropes and I am sincerely sorry that I did.”

In his statement, Mr Amesbury said he had visited Auschwitz last year with the Holocaust Educational Trust in a bid to improve his understanding of anti-Jewish racism.

“This moving experience reaffirmed my commitment to working with the Jewish community to increase education and awareness about antisemitism,” he said.

On Wednesday, the shadow minister met with the Jewish Leadership Council, writing on Twitter: “I wanted Marc [Levy] to pass on my most sincere apologies to the whole of the Jewish community for my regrettable error.”

Today I asked to meet with Marc Levy from the @JLC_uk with whom I have an excellent relationship. I wanted Marc to pass on my most sincere apologies to the whole of the Jewish community for my regrettable error. I will be writing to the @JLC_uk, @CST_UK and @HolocaustUK to… pic.twitter.com/SEtbvO5MEs

Following Amesbury’s apology, activist David Collier, who first reported the Facebook post, wrote: “The danger is that antisemitism is entering the mainstream- becoming normalised – and Mike’s post is evidence of that. The point that something so vile no longer registers in the way it should.”

Collier added: “This isn’t a witch hunt, this is a fight against anti-Semites (…) I hope Mike takes this as a lesson of how normalised this has become, how far this virus is spreading and he works with others to eradicate this disease from his party sand wider society.”