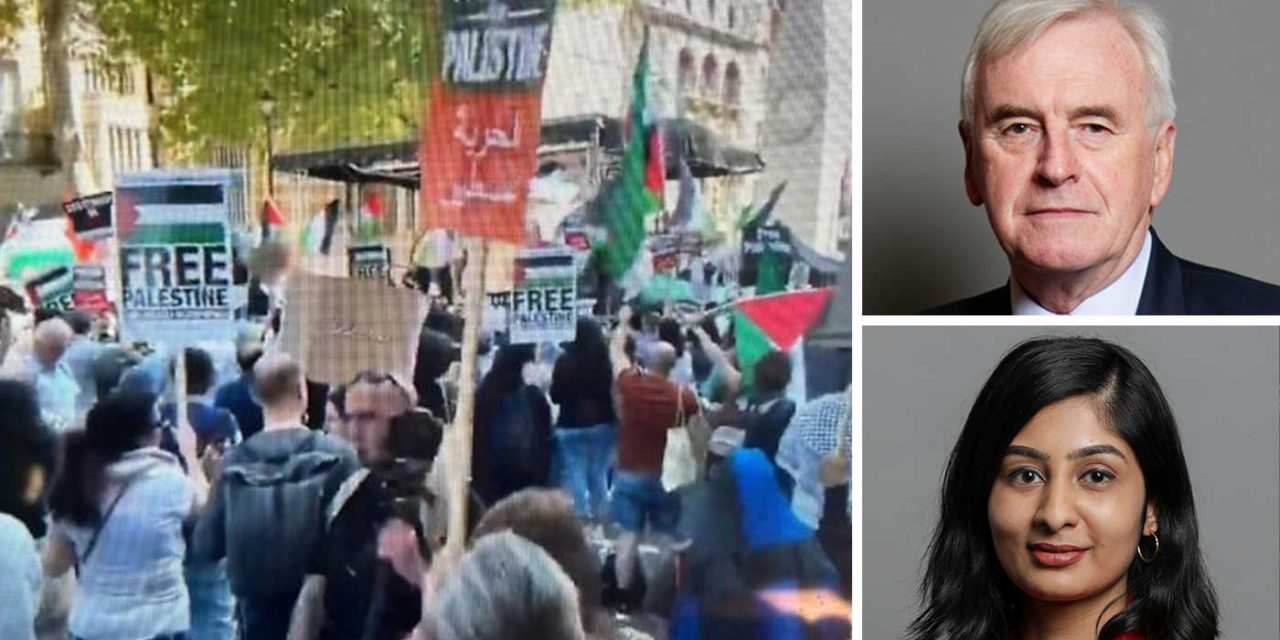 Former Labour Shadow Chancellor John McDonnell and Labour MP Zarah Sultana are under pressure to explain why they took part in a rally in which the crowd reportedly chanted pro-Hamas slogans, including calling for terrorist violence against Israel.

Both McDonnell and Sultana took part in the “Nakba Day” rally in London on 14th May 2022 which was organised by the Palestine Solidarity Campaign and the Stop the War Coalition, two organisations which Jeremy Corbyn is involved in.

During the event, a large group of participants was heard chanting in Arabic: “Abu Ubaida…blow up (the Israeli city) Kiryat Shmona.”

Abu Ubaida is a spokesman of the Izz ad-Din al-Qassam Brigades, better known as Hamas’s military arm. A native Arabic speaker identified the chanting for the Board of Deputies.

The Board of Deputies wrote a letter to the politicians asking for an explanation and urging them to condemn the support for terrorism.

The letter from BoD president Marie van der Zyl to John McDonnell states: “In your rally speech, you said you would fight any attempt to ban the Boycott, Divestment and Sanctions campaign (BDS) in this country. The founders of the BDS campaign have made it clear that they do not seek Israel to change its policies, but rather desire the destruction of Israel as a whole. Still, BDS claims to be a form of non-violent protest. So we assume that, as a Member of Parliament, you will have no problem making it completely clear that you condemn the violence being supported at the event you chose to participate in.”

It continues: “Given your appearance at this rally and the all-but-inevitable behaviour of some of those present, we would ask you to publicly disassociate yourself from the actions of those at the rally.”

McDonnell responded on Sunday morning, writing: “I was not aware of the speeches or chants you have cited in your letter but let me make it absolutely clear that of course I disassociate myself from and condemn any antisemitic statements, speeches or chants or calls for violence if they took place here or on any other occasion. I always have and will always do so.

“One can never control what others say or do at any public gathering but if actions take place that I disagree with, once this has been pointed out, it is right and important to explain one’s own position.

“With regard to your comments on BDS, again let me make it absolutely clear that I support the policy of boycott, disinvestment and sanctions, actually like many Israeli and Jewish colleagues, as a means of exerting pressure on the Israeli government to secure a just and fair treatment of the Palestinian people, nothing more.”

Sultana, Labour MP for Coventry South, has long used her platform to publicly accuse Israel of “war crimes” and “apartheid”. In 2015, she is said to have tweeted that she would “celebrate” the death of then Israeli Prime Minister Benjamin Netanyahu. Not exactly the kind of attitude we’d expect from someone in public office.

In response to Van Der Zyl’s letter, Sultana, claimed: “I did not hear the chant you reference, and I was not at the demonstration at the time you flag in the recording.

“I have no hesitation in disassociating myself from such chants, or in condemning any instance of antisemitism.”

This is not the first time that Saltana and McDonnell have spoken at rallies where activists chant anti-Israel statements or where people show support for terror groups such as Hamas. It is good that the Board of Deputies is pushing back against this, and we hope it will make the MPs think twice about who they associate with.