Naz Shah, Labour MP for Bradford West, claimed Israeli Jews should be “relocated” to America in a series of social media posts and posted an article which likened Zionism to Al Qaeda.

The first message was discovered by Guido Fawkes and dates back to August 2014. The post that she shared said that a “solution to the Israel-Palestine conflict” would be to “relocate Israel into the United States”. The post also said that with Israel moved the world will live in peace. 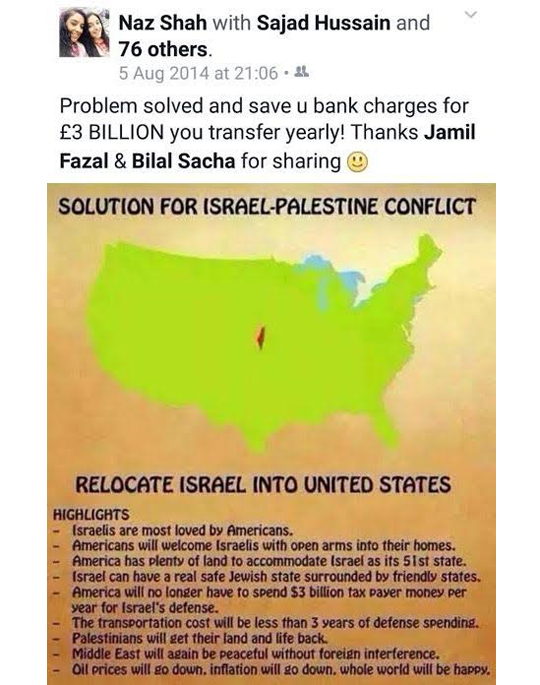 In a second post written the same day, Shah stated: “The only problem with that is Israel would need to return all the land and farms it has stolen and give the Palestinians rights which is not possible. I will tweet Barack Obama and David Cameron and put this idea to them.”

Ms Shah, who defeated George Galloway in last year’s General Election, claimed her views on Israel have moderated over the last two years.

In a statement issued by Labour, she said: “This post from two years ago was made before I was an MP, does not reflect my views and I apologise for any offence it has caused.”

Despite the apology, it appears that these views were not a one off with more messages being unearthed. In one post dated 4th August 2015, Ms Shah published a link to a blog that compares Zionism with Al Qaeda. And in July 2014, during the Gaza conflict, she posted a link on Facebook to the Mirror which had a poll asking, “Is Israel committing war crimes?” 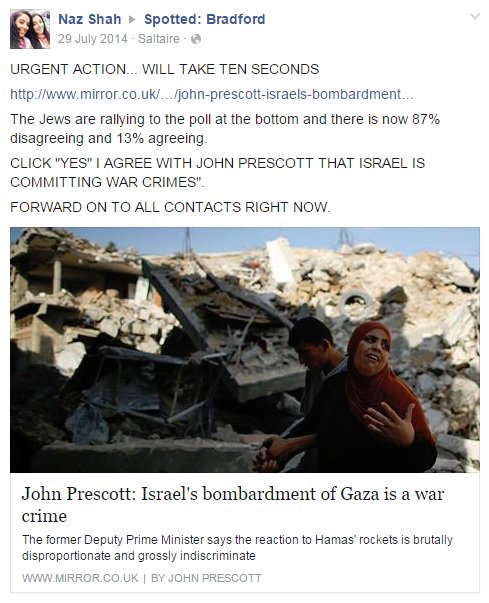 The Jewish Chronicle reports that in January the Israeli Embassy in London complained to Ms Shah after she claimed that no Israeli children had been killed by stone-throwing Palestinians.

During a parliamentary debate on child detainees and prisoners in the Palestinian territories, Ms Shah said the Israeli government provided no evidence of Israeli children being killed or injured by Palestinian minors in the West Bank. 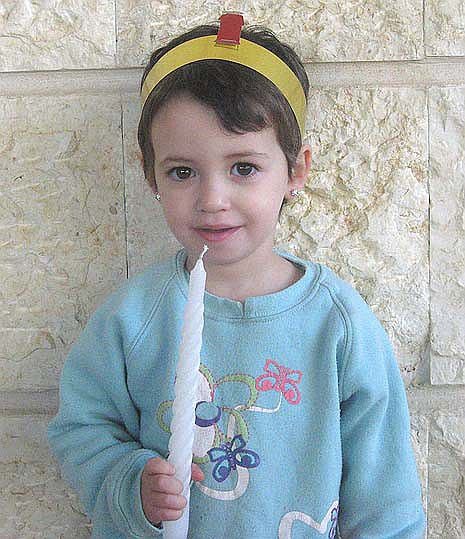 Adele Bitton, an Israeli child who was killed after being hit by a rock thrown by a Palestinian youth. She was in hospital for 2 years before she passed away in February 2015. The picture was taken shortly before the incident.

When her Labour colleague Ian Austin pointed out that four-year-old Adele Biton had died after being seriously injured when she was hit by a stone thrown by a Palestinian youth, Ms Shah responded that there was no evidence.

Ms Shah is a member of the Home Affairs Select Committee, which earlier this month announced it would investigate rising Jew-hate in Britain.

As of this afternoon (26 April) it appears that all of Ms Shah’s posts from 2014 have now been deleted.