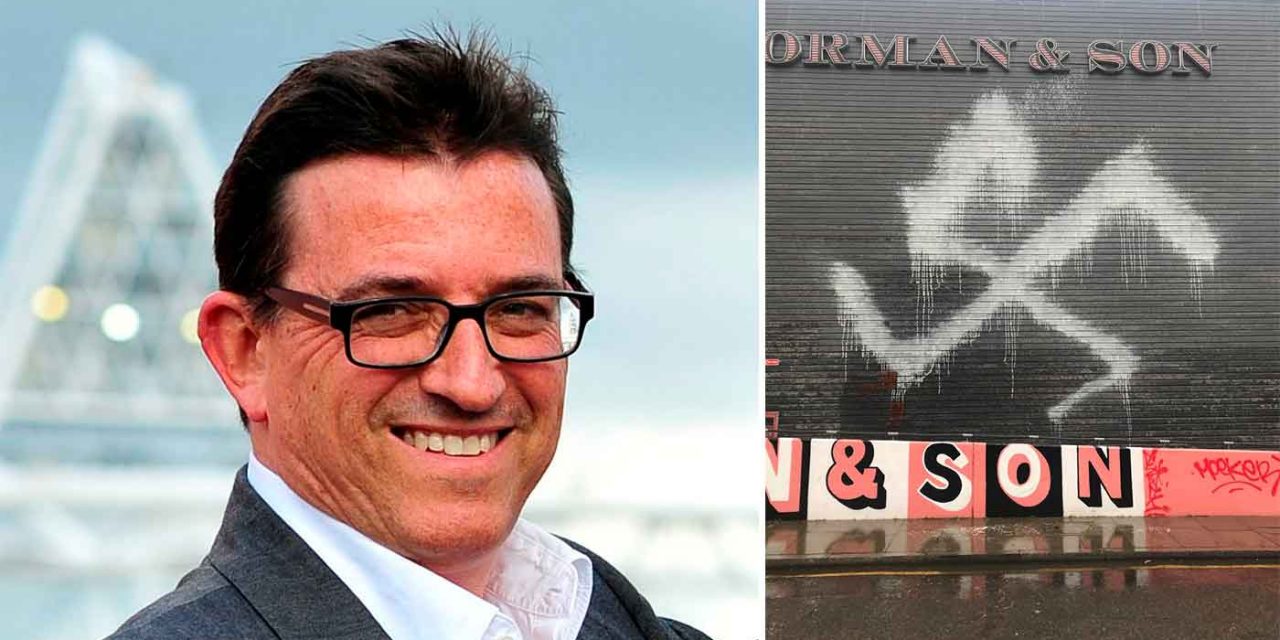 Brexit Party candidate for London, Lance Forman, has been the victim of an anti-Semitic crime this week after a 30ft swastika was daubed on the side of his family business.

Speaking to the Jewish Chronicle, Forman revealed the police had security camera footage of those responsible. He said: “My dad fled the Nazis in Poland and is a Holocaust survivor who spent the war years as a child in a Siberian prison camp.

“He has worked with HET (the Holocaust Educational Trust) to teach children about the horrors of antisemitism. So the fact that we have been targeted in this antisemitic way is quite horrific and sick.

“The police have images of the culprits on CCTV and I sincerely hope they are tracked down.”

Just returned from a business trip in the US to a call from my factory, that someone had done this!!

A totally sick act. My father is a Holocaust survivor who fled the Nazis and came to the U.K. after the war. My great grandad and founder of Formans fled Antisemitic pogroms too. pic.twitter.com/q8it6HkJfv

Some elements of the media have been keen to paint the Brexit Party as a “far-right” political party, seemingly in an attempt to sway voters away, yet it seems the real far right Neo-Nazis are against this Jewish candidate.

Forman said that if the anti-Semitic graffiti was linked to his candidacy for the Eurosceptic party, then those responsible had a “topsy-turvy” view of politics. He wrote Wednesday evening that: “London Brexit Party candidates are Jewish, Muslim, Christian, Atheist, Hindi, Baha’i”, and says that “no party is as diverse”.

Social media users were quick to point out the connection between this attack and the rhetoric of some of the Brexit Party’s political advocates who have attempted to smear the Brexit Party.

Chuka Umunna, an MP for Change UK, tweeted earlier that day: “Nigel Farage, the Brexit party leader, repeatedly appeared on a far-right US talkshow and openly discussed ideas about a “new world order” linked to antisemitic tropes. Why are so many mainstream media outlets not covering this? Why the silence? Why the failure to question?”

In a statement, Brexit party chairman Richard Tice said: “Some politicians and commentators are happy to demonise their opponents as Nazis or Fascists, and others are complicit in covering up antisemitism, right at the centre of our nation’s politics. This is unacceptable and must be condemned by all.

“When a leading member of London’s Jewish community is attacked in this way all must stand up and condemn it. This is exactly what we are talking about when we say that we want to change politics.”

Tice said the attack was a “terrible condemnation of the depths to which our politics has descended”, and that the time to say “enough” to such anti-Semitism in British politics had come.

Unfortunately Lance it’s tweets like this that don’t help 👇🏻@ForChange_Now want change seems like same old same to me
https://t.co/NYbQW5Yg8F