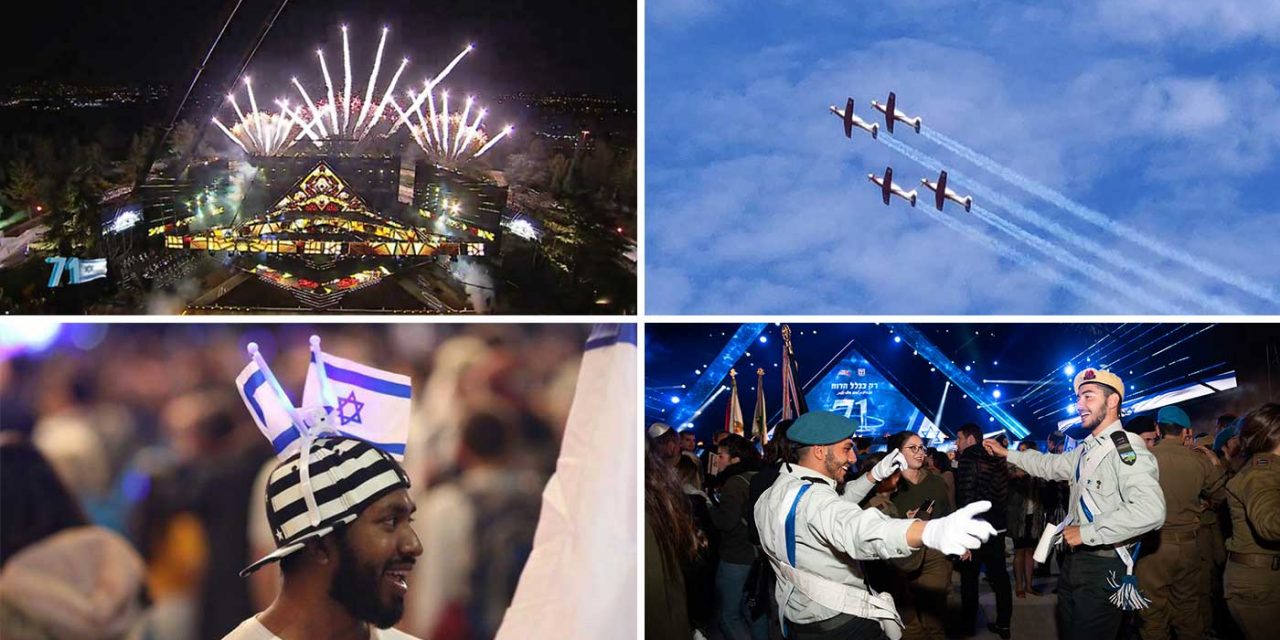 The Jewish state of Israel is celebrating its 71st Independence Day today. Israel truly has a lot to celebrate; a nation that is more than 3,000 years old, but just 71 years young that is having a positive impact in the world and overcome all the opposition it faces to thrive.

“You have turned my mourning into joyful dancing.
You have taken away my clothes of mourning and clothed me with joy,
that I might sing praises to you and not be silent.
O Lord my God, I will give you thanks forever!”

Israel follows the Hebrew or Jewish calendar, which is a lunisolar calendar, meaning that a day starts at sunset in the evening and finishes at sunset the following day. Independence Day started according to the Gregorian calendar on the evening of 8th May and will continue until this evening.

This means that yesterday morning Israel families were remembering their loved ones who had fallen defending Israel and then by evening were celebrating with fireworks and family barbeques.

The Times of Israel reports that “The juxtaposition of Memorial Day and Independence Day is a key element of Israelis’ experience of their country’s anniversary, ensuring that no commemoration completely excludes the sacrifice of the fallen and their families, and that the elation of independence is never far removed from an awareness of its cost.”

It is a uniquely Israeli phenomenon, where remembrance and celebration are interconnected. After all, without the tens-of-thousands who gave their lives to defend Israel, the Jewish people would not be celebrating their independence today.

Israelis generally celebrate Israel’s independence with a night of fireworks, concerts and parties on the evening of Independence Day (which this year was Wednesday night). On this evening the annual torch-lighting ceremony takes place at Mt Herzl in Jerusalem with parades, musical performances, speeches and fireworks. As well as the lighting of twelve torches, each one is lit by different honoured guests and in honour of people.

One torch was lit last night by Rachel Frankel, Bat Galim Sha’er and Iris Yifrach, the mothers of Naftali Frankel, Gilad Sha’er and Eyal Yifrach who were kidnapped and murdered in the West Bank in 2014. Another torch was lit by Mari Nahmias, a Holocaust survivor and mother of eight who was also a foster mother to 52 children. These are just a few examples of how Israel honours its citizens during these celebrations. To read more about the torch-lighters click here.

You can watch the full torch-lighting ceremony below in Hebrew.

On Thursday, Israelis flocked to beaches and national parks, enjoying barbeque (which becomes the national food for the day) as well as playing games, waving flags and celebrating with their families.

A highlight of the day is the traditional cross-country flyover, an aerial demonstration, known in Hebrew as the matas, featuring fighter jets, transport planes, aerobatic aircraft, and helicopters flying past major Israeli cities and towns to delight local residents.

The annual @IAFsite airshow in #TelAviv!

For the third year, the display included Israel’s fleet of F-35 jets, considered the most advanced plane in the world. Another reminder that Israel’s freedom must be defended – a responsibility the Israeli government takes seriously.

Prime Minister Benjamin Netanyahu gave a video message where he noted the day as a “remarkable day of celebration”.

“What an odyssey did we undergo; such trials and tribulations and suffering and wandering,” he continued. “But we came back to our land and 71 years ago we reclaimed our independence.”

“We built a state. We built an army. We built our land. We built a thriving economy that is a wonder to the entire world. We are a hub of innovation like no other. And we’ve built a democratic, free society for Jews and non-Jews alike that is a beacon of light in the heart of the Middle East.”

“This is what Israel is. It’s a hope among the nations and a hope for the nations. Yes, we still have anti-Semitism. Yes, we have those who slander us. But more and more people around the world see the truth about our achievement, about our freedom, about our hope.”

“I know that you share this hope and you share this pride and I thank you for celebrating Israel’s Independence Day with us. Chag Sameach! [Happy holiday].”

Israel’s Ambassador to the UK, Mark Regev, praised Israel’s accomplishments over the last seven decades which he said gives him “confidence and optimism” for Israel’s future.

“I see Israel’s economy growing and growing. I see us building stronger relationships with countries around the world, and especially with countries in the region. And here I see a growing partnership between Israel and the UK – a partnership that is always getting stronger. For all those reasons and more, I’m proud and I’m happy on this independence day,” said Ambassador Regev.

Israel’s military also produced a unique version of Hatikva, meaning “the hope”, which is Israel’s national anthem in honour of independence day.

Happy 71st Independence Day to all our Israeli friends!

The hope that has accompanied a nation.