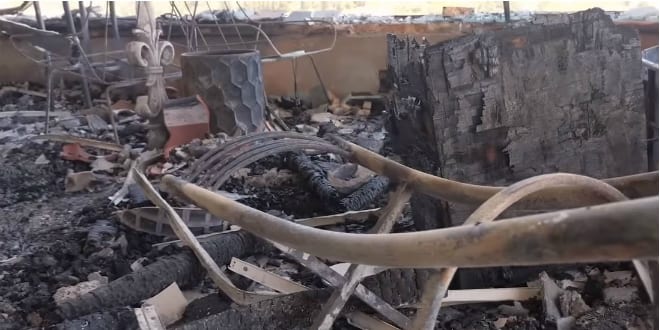 The Jerusalem studio of Daystar, a pro-Israel Christian TV channel, has been completely destroyed in an arson attack.

The fire began early Saturday morning when an arsonist threw a firebomb into the facility.

Daystar was undergoing a major renovation and upgrade of its studio in the Arab neighbourhood of Abu Tor overlooking Mount Zion and the Mount of Olives.

“The control room I would say is probably totally devastated,” Dave Sharett, the contractor overseeing the renovations told CBN News. “The controls actually start here with the electric panel, the main electric panel and anything plastic is totally melted.”

According to Breaking Israel News, a security camera filmed a large flash at around 2:15 followed by a man exiting the apartment onto the balcony. The man then used a rope to descend to the ground after which he fled into the ravine leading away from the city.

The Jerusalem Post reports that the first theory held by the contractor is that the attack was anti-Christian, coming towards the end of the month-long Ramadan period is religious motivated.

The second theory police are pursuing is that the culprit was an Arab employee of an adjacent studio who recently became upset with some of the workers at the Daystar studio. Sharett told Jerusalem Post that the employee has not returned to work since the incident.

“I believe that God has a reason and a purpose and at the very least he’ll redeem what has happened here.  So, these ashes will raise up, be raised up and proclaim the glory of God,” Sharett said.

Daystar pledges to continue their operations and asks for prayers for continued protection.