Jeremy Corbyn has been accused of attending an event hosted by an anti-Israel group on Wednesday.

Guido Fawkes reports that Corbyn was at an Islamic Human Rights Commission event launching a book on Palestine by Hatem Bazian. It was chaired by Amina Taylor, who works for the Iranian regime’s television channel Press TV. The Islamic Human Rights Commission is a notorious Khomeinist group – it organises the Al-Quds Day protests in London, an annual anti-Israel demonstration initiated by Ayatollah Khomeini and attended every year by supporters of the terror group Hezbollah. 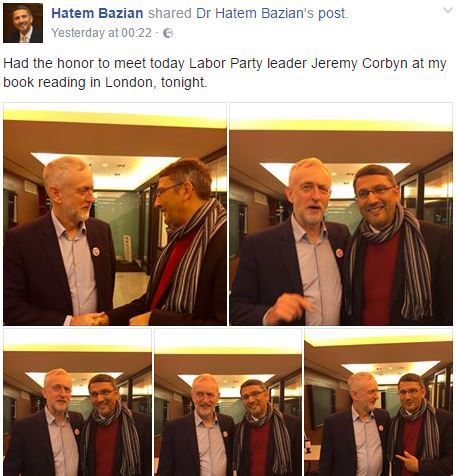 Bazian, the author pictured with a smiling Corbyn above, is a renowned hater of “Zionists“ according to the report. Some examples of his tweets include: “Should Jews Have To Pay Reparations for Slavery?” and “Israel lobby manufactured UK Labour Party’s anti-Semitism crisis”, and as string of rants against “Jews” and the “Israel lobby“.